Henry Stewartson White (Snr) and Ursula Catherine White (nee Tulloch) were both amongst the early residents of the Laverton area. Ursula had moved to Laverton (Thomas and Ursula) in the early 1890s. Henry White had, within the same timeframe, relocated to Laverton and had established a successful wood merchant business.

Henry and Ursula were married in 1895 and continued to live within the Laverton area until about 1900 when the third (Arthur) of their seven children were born. It was then that the couple made the decision to move their young family and business across Melbourne to the suburb of Cheltenham and then to Brighton, on the eastern side of Port Phillip Bay.

Arthur White was born in July 1898 in Laverton, the third of seven children born to Henry (Snr) and Ursula White. Like his two elder siblings, he would have been too young to attend school in Laverton, so his name was not identified to be included on Laverton’s honour board. Our research has revealed that he was born in Laverton and served during World War 1 and so we feel should take his place alongside others from the district.

Arthur was living at the family home in Brighton and working as a packer when he enlisted, just after his 18th birthday, into the Australian Imperial Force on 10 October 1916. He was not the first of the family to enlist, his elder brother, Henry Stewartson White (Jnr), had enlist nine months earlier. Like his brother, Arthur had undertaken four years’ service with the senior cadets and was currently enlisted with the 46th Infantry Battalion of the citizen’s force.

Training commenced on 24 October at the Maribyrnong training camp and this involved Arthur attending the Signal School as part of the 37th Battalion. By 14 November he was reassigned to the 38th Battalion’s 6th Reinforcements at the rank of private but before embarkation he was reassigned to the 8th Field Artillery Brigade at the rank of driver. The job of a driver required you to drive the team of horses pulling the guns and ammunition wagons up to the front line which required excellent horse handling ability as well as a lot of spirit undertaking this task under enemy shelling.

The reinforcements for the 8th Field Artillery Brigade including Driver White embarked Melbourne on 11 May 1917 aboard HMAT A11 Ascanius reaching England in July where they undertook further training in preparation for action in France. By December 1917 Driver Arthur White, and the reinforcements, had joined the 8th in Belgium near Passchendaele.

The Australian and allied forces had pushed the German forces back further into Belgium and what was to be known as the Second Battle of Passchendaele began. This took place at the beginning of the bitter cold, wet and muddy European winter and Arthur would have been assigned to drive a team of horses pulling heavy artillery and wagons through thick mud over uneven ground that would have already been subjected to heavy shelling. His duties would have been completed, all the time, under the constant barrage of enemy fire.

In late February 1918 Arthur White took ill and after being treated at the 1st Australian Casualty Clearing Station, then the 32nd Stationary Hospital in Wimereux, France before he was evacuated back to England suffering from rheumatic myositis that required treatment, care and rest for about two months. He re-joined his unit in June 1918 in Northern France but during further action on the front-line Arthur received a serious wound that required him to be evacuated for treatment in England. He was required to remain in England during for the balance of the fighting with peace being declared in November 1918 that brought the conflict to an end.

Arthur White remained with his unit in England undertaking various duties in the aftermath of the fighting and finally embarked from England aboard the SS Port Dennison on 25 September 1919. The ship made a stop in Port Adelaide on 7 November where Arthur appears to have left the ship and not returned officially being classified as AWOL. His records note that he was discharged from service on 21 December 1919. He eventually returned to his family who were still living in Brighton and shortly after his return he commenced work as a nurseryman.

In 1921 he literally married the girl next door when he wed Christina Lillian Lochhead who lived next door to the White family home, in Brighton. The couple remained in the Brighton/Elsternwick area for some time with Arthur eventually joining the Victorian Railways working as a railway guard. The couple settled down to married life and in 1926 there first child, Margaret Betty, was born and then three years after their son, John Henry was born.

On 3 November 1939, Arthur White enlisted into the Australian Army, during World War 2, serving with the 2/33rd Battalion at the rank of warrant officer class 2. The battalion originally embarked in England but then moved to Palestine for training where it was joined by the 4th Rifle Company. On 11 April, the 25th Brigade, now part of the 7th Australian Division, began its move to Egypt to bolster the defences along the Libyan frontier against an expected German attack and the 2/33rd occupied positions at Mersa Matruh.

In late May 1941, the 25th Brigade returned to Palestine to take part in the invasion of Syria and Lebanon, which began on 8 June. The 2/33rd fought, principally in dispersed company groups, around Merdjayoun until 28 June. It was then that Arthur and his battalion moved to the area around Jezzine and was still conducting operations in the rugged hills to the east of the town when the armistice was declared on 12 July. The 2/33rd remained in Lebanon as part of the Allied garrison until 14 January 1942, when it commenced the first stage of its journey back to Australia. It sailed from Port Tewfik in Egypt on 9 February 1942 and disembarked back in Adelaide on 10 March of that year for further training.

Following a short period of leave and retraining, the 2/33rd was redeployed to Papua to reinforce the battered Australian units on the Kokoda Trail. Arthur and his battalion arrived in Port Moresby on 9 September and by the 13th saw action at Ioribaiwa. With the rest of the Australian force, the 2/33rd were withdrawn to Imita Ridge and subsequently participated in the advance back along the trail that followed the Japanese retreat and it fought major engagements at Myola (11-15 October) and at Gorari (7-11 November). This was around the time that Warrant Officer Arthur White returned to Australia and was discharged, 20 November 1943, having now served in both world wars. 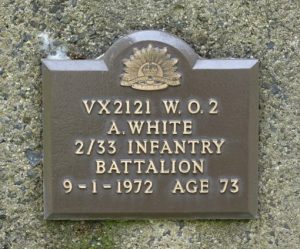 By the 1960’s Arthur and Christina had moved to the Camberwell area and in March 1969 Christina Lillian White (nee Lochhead) passed away at the age of 72. Arthur then moved to Ringwood and three years after the death of his wife, Arthur White passed away on 9 January 1972, aged 73. He is interred within the Springvale Botanical Cemetery.