The Altona Homestead was originally named Laverton Homestead when it was first built in the  mid-1840s by Alfred and Sarah Langhorne.  It was the first homestead built on the foreshore of Port Phillip. The Altona  Homestead provides visitors of all ages the opportunity to step back in time to when early settlers first came to the region.  Located  on Logan Reserve, close to Altona beach, it is a unique and treasured part of Altona’s heritage.

On display are items and collections, as well as community archival material, that reflect everyday living in  the early 1900s.  It is also home of the Altona Laverton Historical Society, a group which are committed to collecting information and preserving the history of the area, and passing down that knowledge  not only to the current generation, but to future generations too.. To learn more about some of the rooms within the homestead, follow the menu on the  right-hand side of this page.

The Altona Homestead has had many uses since it was first built. It has served as a home to several families and as seaside holiday accommodation for employees of the Cuming Smith company. It has also been used as council offices for the Shire of Altona before they moved to Civic Parade, and even the base for various community groups.

The latest restoration works commenced in 1988 through generous funding from the Australian Bicentennial Authority and local council City of Altona. Now, Hobsons Bay City Council, continue to carefully plan and fund the preservation of this wonderful homestead for the community and visitors to enjoy well into the future.

Apart from experiencing a welcomed journey back in time, inspecting numerous themed displays and learning about our local history, you can enjoy delicious food and refreshments in the courtyard and kitchen! We host these events on the first Sunday of the month from February to December, where you can soak up the ambience of our historic homestead.

If you would like to explore the homestead for any paranormal presence that may  remain in the area,  Lantern Ghost Tours will be very happy to guide you through a thrilling adventure  after-dark!

To learn more about some of the rooms within the homestead, follow the menu on the right hand side of this page.

History of the Homestead

1842: Alfred and Sarah Langhorne began to build up the Laverton Homestead run as their principal place  of residence; first homestead built on the foreshore of Port Phillip. 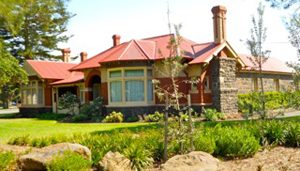 1851: Black Thursday, the first major bush fires listed for Victoria. They barely affected Alfred’s property, but it was enough for him to decide to rebuild the timber home using bluestone imported from Tasmania.

1874: The Altona Homestead and its remaining 2,546 acres sold to brothers Joseph James and John Lecky Phelps. At the height of his holding, Alfred owned 13,000 acres in the area. His property was advertised to include – a stone cottage, substantially built of bluestone,  drawing room, dining room, six bedrooms, servants’ room, stone kitchen and storeroom.  It was also, advertised to include outbuildings comprising stone overseer’s cottage of four rooms, wool shed, with screw press, substantial bluestone stable with loft, four stalls, loose box, and servant’s room, in addition to which there are piggeries, milking and drafting yard, fowl house, and garden. (The Australasian, 18 Jan 1873, p3)

1874: The Werribee Park Mansion is built.

1883: The Altona Homestead and property was sold and purchased by Joseph James Phelps (this was a sale forced by the Supreme Court)

1888: The Altona Homestead and property is bought by Altona Bay Estate Co Ltd. This plan to the right shows the property as it was surveyed by Nathaniel Munro in 1888.

1896: The property is sold and bought by Trust & Agency Co of Australia Ltd.

1903: Melbourne solicitor, William Henry Croker, buys  the property, renovating the homestead extensively by joining the separate wings into one building, establishing a new main entrance, adding bay windows and stucco work to the front, and the modern innovation of an internal bathroom.

1915: The property is purchased by Altona Beach Estates Ltd.

1920: The property is purchased by Footscray company Cuming Smith & Co Pty Ltd (Commonwealth Fertilisers) for use as a seaside holiday resort for their employees, installing trams in the park for sleeping accommodation, and adapting the homestead to provide all kitchen and bathroom requirements. The Meddings family lived in the homestead and were employed as caretakers.

1937: The property  is bought by the Werribee Shire Council and leased to the Twentyman family. It is believed that an electrical upgrade was undertaken at this time.

1942: Some rooms are  used as the local Air Raid Protection headquarters (WWII).

1957: The Shire of Altona is formed after seceding from the Shire of Werribee, when ownership of the homestead was transferred to the new municipality for use as offices. These officed were used until the new Civic Parade offices were opened in 1963. The outbuildings were also used as committee rooms.

1963-1988: The homestead  houses several local organisations including the camera club, children’s dentist and the Altona Historical Society. In 1964, the outbuildings were demolished to make way for the Municipal Library on Queen Street.

1988: The homestead  undergoes major restoration funded by City of Altona and the Australian Bicentennial Authority.

1989: The newly restored Altona homestead is officially reopened to the public under the care of the Altona Historical Society.

Born into a London family of merchants and stockbrokers, Alfred longed to join his three older brothers in the new colony, arriving at Port Jackson in 1835 at the age of 17. He joined his brother Charles working on a rural NSW property learning the skills of a stockman.

When the property was sold about a year later, Alfred and Charles embarked on a career of overlanding cattle and sheep from NSW to both Melbourne and Adelaide. Langhorne Street, Dandenong and Langhorne Creek, SA are so named acknowledging their direct connection to the Langhorne brothers.

While in Adelaide, on one of the drives, Alfred met the young and beautiful Sarah August whom he married in 1841.

Four months later, the newly weds set up house in Stephen Street (now Exhibition Street), Eastern Hill and Alfred opened an office in Bourke Street to become a flour merchant. In 1845 they moved permanently to Laverton Homestead, a pastoral property that would have been mostly self- sufficient.

Alfred continued to overland cattle, export sheep to Launceston, He also owned various properties around Melbourne, as well as wool stores in Williamstown.

In 1854 Alfred and Sarah decided to liquidate much of their assets and return to London to educate their two children, Robert and Alice. It was not much later whilst still in England that 13 year old Alice succumbed to diphtheria.

In 1867 Alfred returned to Laverton Homestead finding it in a rather run down state in need of much repair. Sarah returned the following year bringing their daughter’s, Alice, remains with her. It was not unusual in those times when moving such vast distances were likely to be permanent, to take your deceased loved ones with you. Their son Robert remained in England to complete his schooling.

Sarah passed away in 1871 from Parkinson’s Disease. She is buried with her daughter within the Williamstown Cemetery.

Alfred remained at Laverton Homestead until 1874 when he decided to sell the property, taking up residency in a private hotel in St. Kilda until he his death later that same year. He is buried in the pioneer’s section of Fawkner Cemetery.

Robert was aware of his father’s ill health and was on the ship to Australia when Alfred passed away. When Robert landed, he no longer had close family or property in Australia so he soon returned to England never to see Australia again. His descendants eventually migrated to Canada where they still live today.

The following link will provide further information on the Homestead and the Langhorne family: https://alhs.com.au/wp-content/uploads/2020/09/History-of-Altona-Laverton-Homestead.pdf