In November 1910 Frenchman Gaston Cugnet brought his Bleriot monoplane to Altona and made a couple of very short flights in the paddocks near where the RSL building now stands alongside the railway line. Cugnet was sent from France by the Bleriot company for the possibility of establishing a permanent aviation business in Australia. His first flight was for 7 minutes and reached a height of 200 feet. However, on landing, he bumped into a cow with more damage to the plane than the cow. A second flight at the Melbourne Cricket Ground in December 1910 ended in failure as the aircraft crash landed on tennis courts next to the arena.

Word must have spread through aviation circles that Altona was a most suitable location for experimental flights because just 3 months later, another aviator Joseph Joel Hammond arrived who was destined to make history. 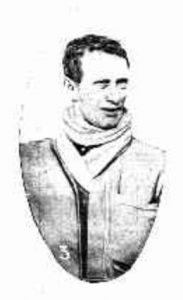 The party selected the site at the rear of Altona House as their flight headquarters. At 6.42 a.m. on 18 Feb 1911, Hammond undertook his first Victorian flight before a small crowd which included Major H. C. Foot of the Royal Australian Engineers, sent by the Australian Chief of the General Staff, Brigadier-General Gordon. Hammond flew over Williamstown and then to the joy of train commuters, followed the Geelong Express Train. Turning north, he flew over Sunshine before returning to Altona where he glided down and made a perfect landing only 20 yards from the spectators. Hammond was in the air for 31 minutes up to a height of 3000 feet and had travelled over 20 miles.

Hammond announced that he would attempt a flight from Altona to Geelong on 20 Feb 1911, taking his wife along as passenger. At 5.59 a.m., he took off for a test flight and his wife waited on the ground, ready to accompany him. Hammond flew to 4000 feet and finding conditions good for flying, decided to fly straight off to Geelong leaving his wife behind at Altona. She went to Geelong by car. Hammond followed the railway line to Geelong and landed on the Geelong Racecourse, taking 55 minutes to cover 42 miles. Major H. C. Foot of the Royal Australian Engineers, sent by the Australian Chief of the General Staff, Brigadier-General Gordon was very impressed and advised that the Minister of Defence would come and watch a flight. He also suggested purchasing 4 planes and employing 8 trained aviators and 10 mechanics. It was not until 2 years later in 1913, after the visit of the Defence Minister to England, that the Commonwealth Government ordered 2 Bristol Aeroplanes to start the first flying school at Point Cook. The Acting Prime Minister of Australia at the time, Billy Hughes also visited Altona for this event and due to the plane and the flight’s success was later to establish the first Australian Flying Corps at Point Cook in 1914. 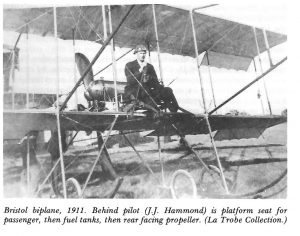 Another “first” accolade was achieved when Hammond flew around Altona for 12.4 miles with his wife as a passenger on 23 February 1911. One of his mechanics, Frank Coles, was his passenger on the next short flight. They ventured further, flying over Williamstown, Port Melbourne, St. Kilda, Albert Park, Government House, the Exhibition Buildings, Bourke Street and Spencer Street for 28 minutes.

Two records were made with one flight when Mr. M. H Baillieu, an Australian, paid to be taken aloft; this being the first charter flight and the first Australian passenger, 2nd March. The first flight over Melbourne was also made by Mr. Hammond from Altona. 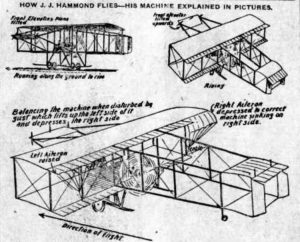 On 6th December, 1969, a plaque commemorating the birth of Australian Aviation in Altona was unveiled outside a shop on the corner of Pier Street and Railway Street South.