The Aboriginal people who lived in what we now know as the City of Hobson’s Bay are known as the Yalukit-willam, a name meaning ‘river camp’ or ‘river dwellers’. The Yalukit-willam are associated with the coastal land at the head of Port Phillip Bay that extends from the Werribee River, across to Williamstown, Port Melbourne, St. Kilda, and Prahran. 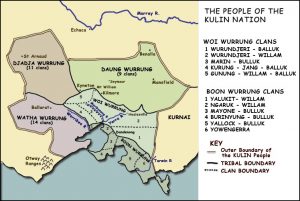 The language of the Melbourne people, includes three dialects, Daung wurrung, Woi wurrung, and Boon wurrung, and is part of a group of related languages collectively known as the Kulin group of languages, or the Kulin Nation. The three Melbourne dialects are referred to as the East Kulin area.

The Yalukit-willam might spend a few days or a few weeks in the one place, depending on the local supply of fresh water and the available food resources. The people hunted kangaroos, possums, kangaroo rats, bandicoots, wombats and lizards; caught fish and eels, and collected shellfish.

The Kulin people, even those who lived great distances from one another, understood each other’s dialects and had an agreement about intermarriage. One of the bonds maintaining this agreement was “moiety affiliation”. The Kulin divided their world into two halves or “moieties”, with one half of the people known as waa (crow) and the other, bunjil (eaglehawk). Individuals were identified with one or other of these moieties and could marry only someone from the other moiety.

Belonging to this land were clans, comprising one or two extended families who hunted and gathered together. These families moved through the landscape using their knowledge of the environment and the seasons. The clans were sometimes distinguished by the names of their leading men. Two such leaders of the Yalukit-willam were Benbow and Derrimut.

The neighbouring group to the Boon wurrung were known as the Woi wurrung and one of their clans, the Wurundjeri-willam were the neighbours of the Yalukit-willam and as such had custodial obligations and shared rights. For the past fifty years the Wurundjeri have looked after the sites of significance within the City of Hobsons Bay.

The Flooding of Port Phillip Bay

The indigenous people are great historians and their records of times long past are recorded in their stories and song. The formation of what we now know as Port Phillip Bay is one of these great records.

The Boon wurrung have a rich oral tradition that contained memories of the cataclysmic floods of 10,000 years earlier when Port Phillip Bay was formed. Fortunately, some of these memories have been recorded. The last Ice Age was at its peak about 18,000 years ago. This cooling lowered the sea level since much of the earth’s water was frozen. Tasmania was part of the mainland and the rivers that now drain into Port Phillip Bay joined to form a river that emptied into the sea off the northwest corner of Tasmania.

15,000 years ago the sea level rose as a result of an increase in temperature. About 10,000 years ago, Tasmania separated from the mainland. Port Phillip Bay, which had been a plain for over 10,000 years, was flooded again by the rising seas. The seas continued to rise and about 5,000 years ago, the sea was higher than its present level, and the area at the top of the bay including the bayside suburbs of St Kilda and South Melbourne were submerged. 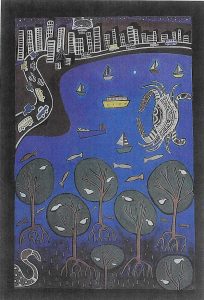 It is interesting to note that the Yalukit-willam’s territory with its long, narrow extension running around the head of Port Phillip Bay as far as the Werribee River corresponds with the area that was submerged 5,000 years ago, Georgiana McCrae, an early settler on the Mornington Peninsula, recorded the following account in her diary: Robert Russell says that Mr Cobb talks to the blacks in their own language, and that the following is an account, given by them, of the formation of Port Phillip Bay: “Plenty long ago …gago, gego, gugo …alonga Corio, men could cross, dry-foot, from outside of
the bay to Geelong.” They described a hurricane – trees bending to and fro – then the earth sank, and the sea rushed in through the Heads, till the void places became broad and deep, as they are today. (G McRae 30 October 1850, McRae, Mornington Peninsula).

The clinching evidence that the Yalukit-willam have an oral tradition that embodied memories of the events of 10,000 years ago is found in other records: Old Bembo, recalled that his grandfather, ‘recollected when Hobsons Bay was a kangaroo ground; they say, “Plenty catch kangaroo, and plenty catch opossum there;” and Murray assured me that the passage up the bay, through which
the ships came is the River Yarra, and that the river once went out at the heads, but that the sea broke in and that Hobsons Bay, which was once hunting ground, became what it is.

The Yalukit-willam people were semi-nomadic hunter gatherers who moved around within the limits of their territory to take advantage of seasonably available food resources. As Gary Presland described in his book: Their way of life …was adapted to their environment in a number of ways. Their hunting equipment and techniques had been developed over a long period and were suited to the purpose. They had an intimate and detailed knowledge of their landscape. This knowledge was passed from one generation to the next. So well did they know their territory, and so efficient were they at getting all they needed, they had to work only about five hours a day.  (G Presland, 1997, The First Residents of Melbourne’s Western Region, Harriland Press)

The Yalukit-willam might spend a few days or a few weeks in the one place, depending on the local supply of fresh water and the available food resources. Major camps were usually set up close to permanent streams of fresh water leaving evidence as an indication of the places where they lived. These places are called archaeological sites. The types of sites found in the City of Hobsons Bay include surface scatters, shell middens, isolated artefacts and burials.

The people hunted kangaroos, possums, kangaroo rats, bandicoots, wombats and lizards; caught fish and eels, and collected shellfish. JH Tuckey, the First Lieutenant of HMS Calcutta, and part of the 1803 Sorrento settlement on Boon wurrung country, published his impressions of Port Phillip Bay; The kangaroo …inhabits the neighbourhood of Port Phillip in considerable numbers, weighing from 50 to 150lb; the native dog, the opossum, flying squirrel, and field-rat make up the catalogue of animals we observed. Aquatic birds are found in abundance on the lagoons, and are black swans, ducks, teal, black and pied shags, pelicans, gulls, red-bills (a beach bird), herons, curlows, and sand larks; the land birds are eagles, crows, ravens, quail, bronze-winged pigeons, and many beautiful varieties of the parrot tribe, particularly the large black cockatoo; the emu is also a native of this part of the country, its eggs having been found here. Three varieties of snakes were observed, all of which appeared venomous. (JH Tuckey, 1805, An account of a voyage to establish a colony at Port Phillip in Bass’s Strait, on the south coast of New South Wales, in his Majesty’s Shp Calcutta, in the years 1802-3-4, Longman, Hurst, Rees and Orme, London)

The hunting, especially kangaroo hunting, was left to the men, while the women concentrated on gathering. Among the vegetable food collected was murnong, commonly called the yam daisy, the gum of the black wattle, the pulp of the tree fern, wild cherries, kangaroo apples and various fungi. Murnong was a favoured food. This small plant with a yellow flower that looks like a daisy, has an underground tuber, something like a yam. It grew all year round but was particularly good to eat in spring. The women collected the tuber in great quantities in their string bags and took it back to camp. When at its freshest it could be eaten raw, but otherwise it was roasted or baked in an earth oven. In the early years of European settlement murnong grew profusely along the Kororoit Creek and other creeks in the area, and covered the plain to the west.

In the Williamstown and coastal and swamp areas, the Yalukit-willam had ample bird life to hunt, including ducks and swans. There were abundant eels, yabbies, and fish in Stony and Kororoit creeks, and the Yarra River. In March 1840, Robinson saw Dindo, Derrimut’s mother, feasting on tadpoles.

The Landscape of Hobsons Bay

In the summer of 1802-3, Acting-Lieutenant Charles Robbins in the ship Cumberland was sent by Governor King to investigate Port Phillip Bay. With him were acting surveyor-general Charles Grimes, and James Flemming, a gardener. Flemming’s journal for February 1803 records brief impressions of an excursion from Point Gellibrand to Point Cook.

The land for two or three miles is a gentle rise from the beach, which is muddy, with large stones; the land stiff clay, the stone appearing at the top; a little further, near the beach, a swamp light black sand, white shells at bottom. There is a slip of trees about half a mile from the beach, then a clear level plain to the mountains, which I suppose to be fifteen or twenty miles Passed two inlets of salt water, Kororoit and Skeleton creeks. (JJ Shillinglow, 1972, Historical Records of Port Phillip The First Annals of the Colony of Victoria, Heinemann) 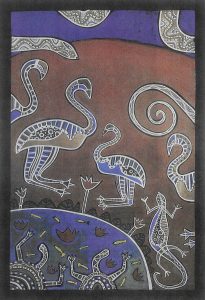 There are also descriptions of the land management practices of the original inhabitants. They regularly burnt off the grasslands to encourage the growth of new grass that would attract the kangaroos and emus for hunting. Wedge’s field book provides an account and makes clear why the area was so attractive to Europeans: The whole is thickly covered with a light growth of grass the soil being in general stiff and shallow… the plains are quite open… and I have no doubt they will become valuable sheep stations for breeding stocks.

When John Batman explored the area in 1835 he noted that the country between Point Wilson and the Yarra was a grass-covered plain. The point at the river mouth – now Williamstown – was thinly timbered with she-oak and covered with kangaroo grass. Here Batman saw great numbers of pelicans and swans and scores of ducks and teal. When George Robinson, visited the Port Phillip settlement in December 1836 he wrote; “Saw nothing but grassy country, open forest, plenty gum and wild cherry. Saw where the natives had encamped, plenty of trees notched where they had climbed for opossums. …There are herds of forest kangaroo immensely large, a short distance from the settlement, also flocks of emus on the western plains fifty and sixty in a drove. …The country through which I travelled to the Salt Water (Maribyrnong) River had a park-like appearance, kangaroo grass being the principal, the trees she-oak, wattle, honeysuckle. Saw a blue flower, thorny appearance. Numerous old native huts.” (NJB Plomley, 1987, Weep in Silence A History of Flinders Island Aboriginal Settlement with the Flinders Island Journal of George Augustus Robinson, 1835-1839, Blubber Head Press, Hobart)