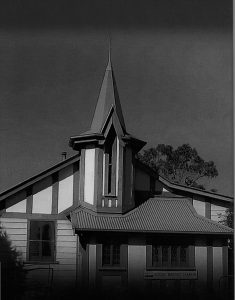 In 2015, the Altona Baptist Church, located on Sargood Street, celebrated 100 years of worship. Like so many other institutions, clubs and organisations, it owes its beginning to the determination and endeavour of our early pioneers.

In early September 1914, Mr and Mrs Lawrence Fleming and their children Larry, Tom, John and Alice, moved from Newport to what is now 30 Blyth Street Altona. After they had settled in Altona, the Fleming couple saw a need for Sunday School activity for children in the district, including their own.

Only a small number of families lived in the area at the time, where there were about eleven houses and 20 people from the nearby coal mine. However, numbers swelled over the Christmas holidays with people flocking to the beach and living in tents along the beach front.

Mr Fleming, being a Sunday School teacher, organised for the Newport Church of England’s minister to come and hold beach services at Altona.  Unfortunately, because people attended services in their neck to knee bathing costumes, the minister said it was the wrong place to start a Sunday School and he would never come again! Mr Fleming also asked the Methodist Minister but again, he would not come unless people could dress properly!

The beginnings of what would become Altona Baptist Church (elsewhere referred to as ABC) occurred in March 1915. Mr Lawrence Fleming asked a fellow workmate, Mr. George Loft (who was also a Sunday School teacher at the Baptist Church in Newport), to come and start a new Sunday School class in Altona. George and Lawrence worked together in the Signal Branch at the Railway Workshops at Newport. These new services would be held in the Flemings’ home.

The first service was held in the Flemings’ front room on 1 February 1915. The Harrington and Stuber families joined them by the end of February, so the group began to grow.    To add musical accompaniment to the singing of hymns during services, they were moved to the Stuber residence where Mrs Stuber could play her piano.

In 1915, the Fleming family built a hall in their backyard measuring 30 feet by 11 feet 6 inches. Meetings were held there until the end of 1917 when the hall became too small. The following year, the church services were moved to the Progress Hall on the corner of Blyth and Sargood Street, with the hall facing Blyth Street.

Four years later, Mr Loft was able to acquire the Baptist church building in Tylden (near Kyneton, also known as ‘Woodside’).  The building had been used by Reverend Ingram Moody, the Baptist Association’s first ‘bush ministry’ in 1859, but being no longer in use, the group in Altona were told they could have it for their services. 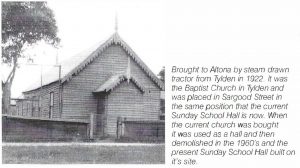 The ‘Tylden’ church building was loaded onto a trailer and pulled to Altona by a steam tractor. It was placed in Sargood Street, on a block of land next to the Progress Hall. This land had been donated by Mr Spencer, a member of the church, and this site is where the church hall now sits.

During the depression years, the ‘Tylden’ Church building was getting too small so in March 1929, Rev W W Baird made arrangements with a Mr Brooks to buy the Progress Hall. In the 1930s, the Progress Hall was converted to look more like a ‘church’ building, complete with a spiralled tower and a fellowship room out the back, under the supervision of Mr L E Warner. Its look is reminiscent of American Hometown Churches, and that was intentional.

The Progress Hall, which originally faced Blyth Street, was ‘rotated’ in 1946 to face Sargood Street so a Manse could be built next to it. The manse remained on the site throughout the ministry of Rev R Steele, as up until then the Minister lived in rented premises. 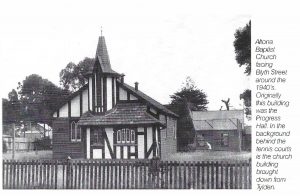 By 1960, the ‘Tylden’ Church building was in poor condition.  It swayed in the wind and there were carpet squares covering the cracks in the floor. It should have been demolished long before reaching this state, but it was full of happy memories, first baptisms, as well as socials and concerts for many who were there from the beginning. A few years earlier, in 1954, the church had also celebrated its 26th anniversary in the Tylden Hall. Sunday School too was held in this space.

Despite the community’s sentimental attachment to the ‘Tylden’ Church building, it was demolished around 1960.  It was very hard for the congregation to see it taken down, but shortly after, a new Hall was built on the same site by newcomers to the church.

In 1978, a stained-glass window was added to the church building (the ex-Progress Hall) in memory of the Fleming family and the Sunday School origins of the church. 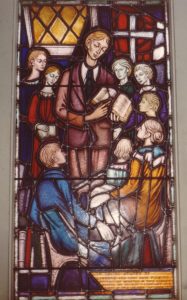 Commemorative window made in honour of Mr and Mrs L Fleming

In 1998, an extension was made to the side of the church, which added 40 – 50 seats and a new foyer connecting the church building to a walkway along the brick Sunday School building. During the Dedication Service, Rev Ken Danes discussed a plan of enlarging the church building, including the demolition of the present building, but the idea was shelved as it was considered too expensive.

In 2008, the internal orientation of the church was rotated to face Blyth Street with a removable adjustable stage.

More information on the Altona Baptist Church is detailed in their 100 Years Celebration booklet published in 2015: