On 15 March 1918 a small non-official post office opened on a location adjacent to the railway station.

As there were no regular trains to Altona then, the mail was picked up at North Williamstown railway station in the morning and the reverse carried out at night for Altona’s outgoing mail. Opening of this post office was pivotal in the history of development in the district through providing a better means of communication with the outside world.

In April 1921 the post office was transferred to 12 Pier Street where post office business was conducted in association with a general store under the management of Richard Augustus Blomberg. The population of Altona at that time numbered about 500. Savings bank facilities were added to the post office’s list of services in April 1922.

Harry and Ivy Spear ran the post office and Commonwealth Bank agency for a time before Herbert Chorley purchased the store in May 1926. Two years later in August 1928, the post office and store were transferred to a new site on the corner of Pier and Blyth Streets.

From 1932 a manual telephone exchange with 10 subscribers operated between 9am and 6pm. In the ensuing years as the number of subscribers increased, the hours were extended from 8am to 8pm. Essential services such as public telephone, hospital, doctor and chemist were switched through to the Williamstown Exchange for an all night service.

The delivery of telegrams by a messenger, employed by the postal department, also began at this time meaning receivers no longer needed to pick up their telegrams or wait for delivery along with their groceries. The manual telephone exchange now operated from 8am to 10pm weekdays, 8am to 1pm Saturdays and 9am to 10am on Sundays, Christmas Day and Good Friday.

The need for a larger post office became pressing and in 1949 the PMG’s department purchased land in Queen Street for an official post office. The Altona post office was raised to official status on 28 August 1950 when it was transferred from the general store to a fibro cement building erected on the Queen Street site. Mr A C Aylmer, a permanent officer of the department, was appointed as postmaster. The new post office provided a total floor space of approximately 1,250 square feet, not large by modern standards but a considerable improvement on the cramped conditions that existed previously.

During the financial year 1968-9 more than two million postal items were handled at the Altona post office. To cope with the rapidly increasing volume of postal business, the PMG’s department replaced the old fibro cement office with the new single storey brick building designed by the Commonwealth Department of Works, and constructed by H & L Weaver Pty Ltd of Altona at a cost of $86,589. 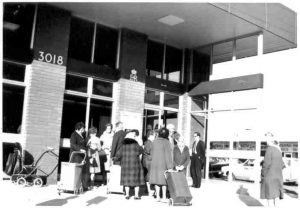 Work commenced early October 1968 on the attractive building of cabana tan bricks from Ballarat with recessed points, aluminum doors, windows and wide fascia board, all to minimise maintenance, on the corner of Queen and Blyth Streets.

A covered entrance way extended along the Pier Street frontage with flower and plant boxes. The 45 square air conditioned building extended approximately two-thirds of the way along the Queen Street frontage of the site and included private letterboxes, public telephones and pebbled areas along this side. Allowance was made for future extensions by constructing a brick veneer wall on the east side.

From the end of the building to the rear lane-way a high brick wall fully enclosed the Queen Street and lane frontages. Provision was made for a garden in front of the Queen Street wall. The paved area behind the wall could be used as a loading bay and for car parking. 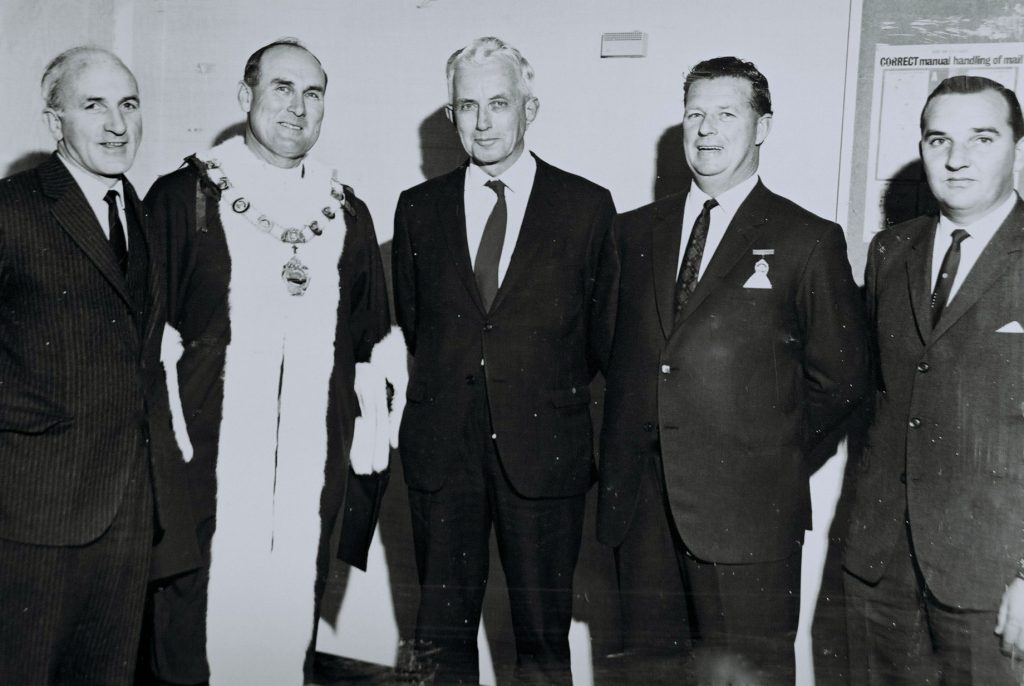 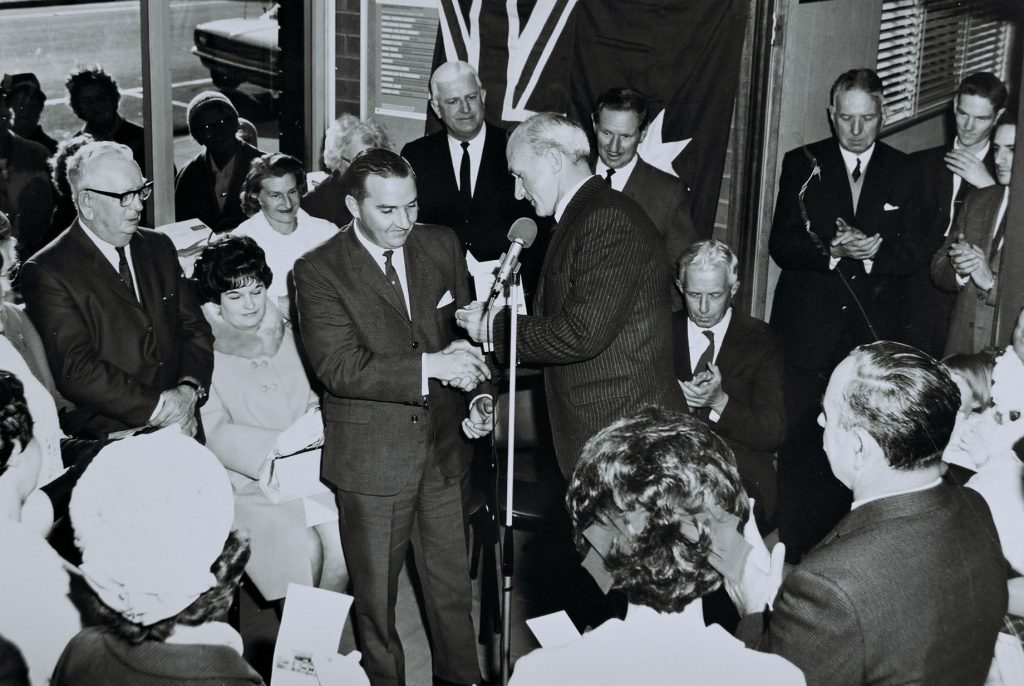 Mr M Lee handing over the keys to Mr R Scott, to Mr Scott’s right , seated is Mrs Scott and next to her Cr Pat Burns

The old post office became the property of builders H & L Weaver Pty Ltd on acceptance of their tender for construction of the new post office. Tenders were then called for the removal of the old structure and the company accepted the Altona Youth Club tender of $350, later reduced to $290. The building was to be dismantled and re-erected in the Cathedral Ranges near Buxton where it would provide a permanent bush chalet for the Altona Youth Club and possibly other Altona youth organisations. The dismantled building was stored temporarily at the Altona Lodge property in Seaholme after being transported there by Harry Weaver.

However in October 1970 the Youth Club was advertising timber from the old post office building for sale.  They had to abandon the idea of transporting and re-erecting the chalet because land at Buxton could not be leased from the Lands Department.