History of the Altona Fire Station

An article to the Editor of “The Argus” Thursday 23rd June 1932 reproduced below said:

Fire Risks at Altona Sir – For years the Altona Riding of the Werribee Shire has had to pay 75 pounds per year to the Metropolitan Fire Brigade Board, and in every fire which has occurred locally the premises have been gutted before the arrival of assistance which has to come from Newport and Williamstown.

The Altona Progress Association, has several times, the last only a few weeks ago, appealed to the Metropolitan Fire Brigades Board to establish a local branch of volunteer fire fighters. A block of land was offered to hold a temporary hose reel free of rental. Officers have been sent to report and that they have always replied to us in Altona that the matter would be given favourable consideration. At a public meeting which was attended by an officer from Newport fire station, we enrolled sufficient names to form a volunteer brigade. Our last appeal elicited a reply that no funds were available to carry out the project at present, and that the Board would deal with the matter later. Eighty percent of the buildings in Altona are constructed of wood and iron and in the absence of fire fighting facilities, insurance rates are very high. A line of hose would have been of great service at the last catastrophe.

It is time those in authority gave us a great deal more consideration.

The MFB Journal “Word Back” Vol. 1 No.5 p3 1982 featured notes from a discussion with “Beau” McGowan, one of the early members who could remember men who were part time firefighters, or partially paid, usually referred to as PP’s. He remembered Stations 44A St Albans, 44D Deer Park and 46 Altona as being operated by PP’s.

Equipment then consisted of one hand drawn hose reel, 1200 feet of hose and two branches, Y couples, Stand Pipe, two hand extinguishers and some beaters. There were six volunteers and the station was opened by District Officer Whittaker Wright from Newport Fire Station. The volunteers were paid seven shillings and sixpence, and ten shillings if they had to use their own cars.

The PP firemen lived in the area and were alerted to an alarm of fire by a siren at the station and alarm bells in their homes. During the day only two men were available as the remaining four worked outside the area. The PP members also did theatre duty at movie theatres in Footscray, Newport and Yarraville.

The Fire Station moves to McBain Street in 1938 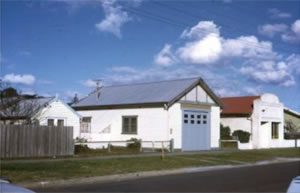 or use as the brigade station. The hose reel was replaced by a Bedford Hose Carriage with a water tank fitted. This was possibly one of the first water carrying hose carriages in the brigade, according to a former member.

The building (pictured right circa 1970’s) has since been demolished and a private home is now located on the site.

The part paid firemen operated in Altona until December 1961 when the station became fully staffed and moved into the current Akuna Street building and the McBain Street station closed.

One of the early major fires attended by the Altona PP’s was the grandstand at the Williamstown Racecourse. 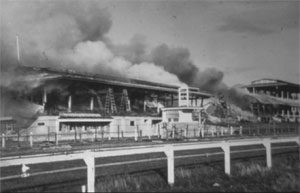 Just after World War II the stand was being renovated after being occupied by the armed forces when it “went up”, never to be replaced, it is understood no cause of the fire (pictured) was ascertained.

There is also comment in the records that the brigade were called out to a bomb which had landed in the locality after falling from an aircraft located at the nearby Point Cook RAAF base in Point Cook. The Bomb Disposal Squad were eventually called to remove this item.

Other events attended are understood to have included bush fires, and the destruction of the Altona Picture Theatre.

Altona as a shire and a city has developed in different stages from a small beach front holiday style venue with beach front vistas, then as developers moved in it became marketed as a sea side residential area. Industry began to develop on large blocks of vacant land with companies such as Mobil, Australian Carbon Black, Hoechst, Qenos and the like entering the area, later and more recently followed by Toyota, Nippondenso, various freight forwarders and logistic groups. Now as some of the earlier industrial tenants have begun to depart, the area is beginning to attract more residential premises as the western side of Melbourne continues to grow and expand.

The residents and fire fighters have had to combat a number of problems in the past and some of these photographs from the Altona Laverton Historical Society records, together with press clippings, give some idea of the incidents that have occurred in the past.

The Altona area has flooded a number of times in the past and it is assumed that this would have caused problems for all emergency services at the time.

Development of Cherry Lake as a flood retarding basin and similar work in the area has now greatly reduced the chance of more local flooding events.

Today and the Future 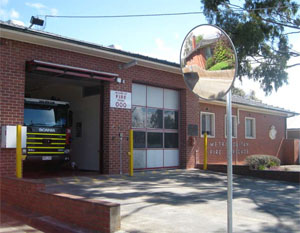 Altona and has celebrated the fiftieth anniversary of its construction and establishment on this site. Located in a primarily residential setting, the unit is within easy reach of local homes, commercial shops, factories and larger industrial premises within the general vicinity and neighbouring suburbs served by it.

The unit has been advised that construction will begin shortly on a new building at the site, and this in itself will be worthy of recording for future historical reference. The current building will be extended and redeveloped.

Plans are in place for a section of the current premises to be demolished, replaced by a new extension providing additional space for the continuing operations of the station, its personnel and equipment.

As well as attending to fires and similar emergencies, fire brigade members train as Emergency Medical Responders who now also respond to medical emergencies, so it is possible if you dial 000 in an emergency, it may not be an ambulance arriving but a fire tender with crew.