Up until the closure of the Truganina Explosive Reserve, in 1962, Altona hosted two significant piers that provided very different facilities to shipping. The first to be built was the Altona Pier, that extended from the southern end of Pier Street 1290 to 1300 feet out into Altona Bay, that was built in 1888 by the Altona Bay Estate Company. Its prime purpose was to transport potential buyers of land, within the Altona Estate, between Port Melbourne and Melbourne to Altona by steam ships that operated in the bay at this time. After the initial land sales of 1888/89, the service would continue as a means of transport to the city.
The second pier built along the Altona Beach front was the pier that serviced the Truganina Explosive Reserve. This pier was built around 1901/1902 at the western end of what is now Doug Grant Reserve commencing at the entrance of Laverton Creek and extending 1618 feet into Port Phillip Bay. Upon arriving at the reserve, the explosives were stored in the magazines, until they were taken by rail wagons, hauled by Clydesdale draft horses, to small boats (lighters) that were moored at the pier. They were then taken out to be loaded onto ships for onward transport. Nine explosives transports were carried out each day with 200 explosives boxes of 50 pounds (22.7 kg) each. 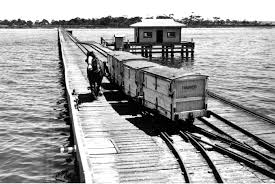 At the invitation of the directors of the Altona Bay Estate Company (Messrs. David Munro, J. Blyth, Hosie, Alcock, Perryman and Macartney), about 100 gentlemen yesterday visited the property of the company, at Altona Bay, which is situated between the Williams-town racecourse and Laverton. One half of the visitors went down by railway, a line having been carried to the border of the estate, and the other half by the Commissioner, the steam launch of the Harbor Trust. The site in question consists of 2700 acres of land, which has been occupied for pastoral purposes since 1844. The land is fertile, cleared, and well grassed, and has a good shelving beach, well adapted for bathing. The block has been surveyed in the form of a township, named Altona; a railway station is to be built on it a quarter of a mile from the beach, and for the accommodation of those who prefer travelling by sea, a pier 1290 feet long, of which 850 feet have already been constructed, is to be made. A street in line with the pier runs up to the boundary of the estate, and the railway line goes through the centre, connecting with the Geelong line on the Williamstown side of Laverton. The streets in the surveyed township are all 66 feet wide, and the blocks are laid out so that a purchaser may buy either one lot or a dozen. The locality seems likely to become popular as a marine resort, and it has the advantage of being protected from the westerly gales by Point Cook. The visitors were entertained at luncheon, Mr. J. Blyth occupying the chair. Among the toasts were those of the Harbor Trust, proposed by Mr. David Munro and responded to by Alderman O’Grady and Captain Fullarton; and Altona Bay, proposed by Mr. Patterson, M.L.A., and acknowledged by the chairman and Mr. Hosie. Mr. Patterson remarked that there was no other place so near Melbourne which offered the same advantages to those in search of sea air. Altona Bay was within an hour or half an hour’s steam of Melbourne, and it was only by multiplying marine resorts of this kind that Melbourne could hope to compete with the attractions of Sydney Harbor. The estate will be offered to the public in allotments on the 8th September. It is picturesquely situated, as well as being within easy reach of town, and the attractions the locality has to offer promise that it will rapidly achieve popularity. 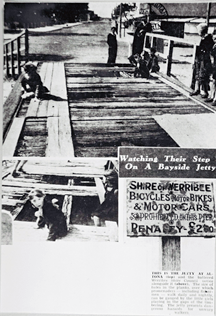 A pier that nobody owns and nobody wants to own is causing perturbation to residents of Altona and Werribee Shire council, who waited upon the Minister of Works (Mr. Kiernan) last week, and offered it to the Government. In polite, but exceedingly firm, language the Minister made it clear that the Government was not in the market for bridges of dubious ancestry and shaky health.

The history of the unwanted pier is quite a romance in itself. Cr. O’Brien and other speakers told the Minister that months of search was needed before the pier, which is located at Altona, was traced back to the Altona Beach Estate Co., which built it in 1888 in order to enable it to dispose of land bought for speculation. It was used at one time by the Altona brown coal mine also. On occasions there were dense crowds all along the 440 yards of the pier’s length, and as some piles were missing apprehension was felt for the safety of the public. When a seaplane that dived into the Bay had to be rescued, the pier was pronounced unfit to bear the weight of the parts. The Werribee council was unable to find funds to recondition the pier, and local residents were unanimous in the hope that it would be taken over by the Government, as it was really an asset to the district.

The Shire engineer (Mr. G.T. Little) said £10,000 had been spent within recent years on foreshore improvements and in linking up Altona road with adjacent metropolitan areas. The pier was totally unsafe, and should be closed. If £600 were spent on piles and decking it would be made fit for use for several more years.

“I realise what the pier means to the health and prosperity of the district, inasmuch as it is at times a magnet for large crowds of holiday makers,” said the Minister in reply, “but I should be failing in my duty as a Minister if I acceded to your request.” The Government, he continued, had no money for such works, even if it were prepared to accept them. This was not the sort of proposal he could recommend, but he would bring it under the notice of the unemployment relief committee, which might include it on the schedule of works for next year. He advised them, however, to shoulder part of the burden themselves.

Included among the speakers were representatives of the local foreshore committee, progress association, swimming club, A.N.A. branch and A.L.P. branch.