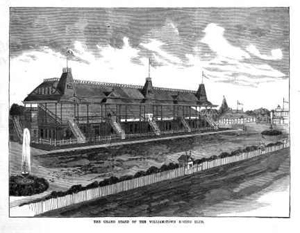 Horse racing began in Williamstown in 1858 on a track closer to the seaport of Williamstown than the better known historic site along side Kororoit Creek.

In 1868 it was decided to form the Williamstown Racing Club, however the trustees were unable to reach amicable terms with the Williamstown Council and therefore approached the Shire of Wyndham, who made the site alongside Kororoit Creek extending to the foreshore available to them.

The committee of management of the new racecourse was established in 1869 made up of Alfred Langhorne, David McLean and John Hughes representing the Williamstown Racing Club, and Peter Power, Thomas Mason and Edward Crane representing council.

Regular holiday race meetings at Christmas, New Year and Easter were organised to which Alfred Langhorne would regularly donate. Additional income was derived from letting out the reserve for cattle grazing and leasing the track to wealthy horse owners and trainers to use as a training facility for their thoroughbreds.

The committee undertook major maintenance works including the construction of a timber and ironwork footbridge across Kororoit Creek near the ford in 1873, followed by a total racecourse make over including the laying of a new oval track closer to the creek in 1876.

The first meeting after the 1876 renovations was a total disaster brought about by morning rain substantially reducing the number of anticipated patrons arriving for the afternoon meeting. Those who did attend were drenched to the skin by several storms driven by gale force winds that collapsed all the tent booths. Patrons in their miserable state trekked to Newport station to catch a train home, rather than wait for their specially booked train to pick them up from the course later on.

The following year trees were planted to provide windbreaks, along with lawns and flowerbeds emulating Flemington.

In 1885 Victorian Railways constructed a spur line off the Geelong line for the use of patrons, ending before Kororoit Creek Road. Two years later the spur was extended south to the course entrance.

In 1888 the inaugural Williamstown Cup was held. The annual event survived for 74 years, later being ran at Flemington, Caulfield and Moonee Valley until the final race in 1961. From 1962 to 1998 the Sandown Cup took the place of the Williamstown Cup.

Other famous races that began through their namesakes involvement with the Williamstown Racing Club were the JJ Liston Stakes, Underwood Stakes (formerly known as the Williamstown Stakes), CF Orr Stakes and Rawdon Handicap.

The final race meeting at the Williamstown Racecourse took place on 10 Feb 1940.

It was at this time that the Williamstown Racing Club was forced from the racecourse as a wartime measure when it was taken over by the Army during WWII. On 29 Jan 1947 fire destroyed the members grandstand of the unused racecourse.