In 1917, the Reverend RHB Williams, a young vicar from Newport, started these church services. He would travel from Newport by steam train on Sundays to conduct Divine service on the shore end of the old Altona pier.

Reverend FG Hughes was the vicar and inspiration for growing the church and organising events. Mr RW Hammond, a member of the church’s congregation, volunteered to play the organ at one of the services and remained the organist for the next 33 years. He also served on the Altona Community Hospital board of management and was recognised with the Queen’s Medal upon of her coronation.

On 27 April 1926, 23 people worked together to appoint wardens, a vestry and to arrange rental of the Progress Hall to use for church services. The group included Mr & Mrs AC Turner, Mrs Tyrell, Mrs A Woodward and Mr & Mrs R Harvey. Services in the Progress Hall commenced on the first Sunday after the initial meeting and continued there for about two years.

From April 1928, Reverend Edwards ran the church and he named it in honour of St. Eanswythe. He had commenced his ministry at the church of St Mary and St Eanswythe in Folkestone, England 40 years earlier. The Anglican ministry, as well as Reverend Edwards, had a desire to emphasise the Church of England’s existence long before Henry VIII, hence his reasons for dedicating the new church to St. Eanswythe. 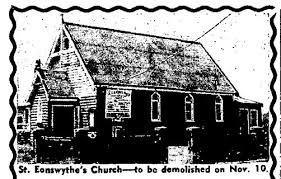 The 1933 building that was St Eanswythe

Through the efforts of Mr AC Turner, a building formerly used by the Methodist Church in Newport was acquired and moved to the church site in Queen Street, Altona. This space served as the church until another building could be purchased from Laverton on 13 October 1933. This Laverton building was dedicated as a church by the Venerable Archdeacon Hancock on Sunday 17 December 1933.

Reverend Edwards officiated at the first wedding in the parish when Miss J Everingham married Mr J Vost. The first wedding in the newly bought second church building was for Mr & Mrs R Stuber of Mount Street. Reverend Edwards served the church well for some years in difficult times. On his departure to another parish, it was necessary to merge the church into the parish of Newport.

For the next 25 years, the ministry of Altona was provided by lay readers who spent a part of each week in the district. In August 1954, the now Venerable Archdeacon RHB Williams returned to Altona for his first visit since he begun Church of England services on the shore end of the old Altona pier.

St Eanswythe became a separate parish again when Reverend JR Walton was inducted as vicar on 6 February 1959. He served the church for the next 3 years. During his time at the church, the property continued to grow. In February 1961, a block of land that was owned by the church, fronting Blyth Street, was leased under a very favourable agreement to the Ampol company, intended for the construction of a service or petrol station. The finance which became available through this lease allowed for the extension of the church property.

Towards the end of 1962, with the aid of a bank loan, two blocks of land bordering on the church property were purchased. Plans were then started for the erection of a vicarage on the block at 7 Bent Street.  During this stage of construction and redevelopment, Reverend WW Moriarty was inducted to succeed Reverend Walton, occurring in November 1962.

On 3 March 1963, nearly 200 people attended the special service of thanksgiving at St Eanswythe and witnessed the laying of the foundation stone of the new vicarage. At the conclusion of the service, the congregation proceeded to what was to be the new front entrance of the vicarage, with the Archdeacon of Essendon, Venerable RH Dann, laying the foundation stone. A house on the other block at 113 Queen Street served as a temporary vicarage until the permanent building was completed in June 1963.

The last service of thanksgiving was held in the old church on 9 November 1969. This was the building that had been transferred from Laverton back in 1933. Demolition of this building commenced on 11 November and all services were then conducted within the Salvation Army Hall, on the opposite side of Queen Street. On 16 November, the first sod of turf in the building of the new Anglican Centre was turned by Venerable RH Dann after Sunday service concluded. The new centre planned to include some unusual features including the narthex (gathering area), vestry, hall, a shop, and kitchen, as well as the church itself. The design was intended to be in line with church building in England.

The new church centre was officially opened on 12 September 1970 by the Archbishop of Melbourne, Dr Frank Woods. The congregation on this special occasion included past clergy members of St Eanswythe, clergy of other denominations, clergy from other Anglican churches within the area, the Mayor and Councillors.

In December 1979, the Most Reverend Archbishop Robert Dann returned to the Anglican parish of St Eanswythe to dedicate the new modern three panel-stained glass window that had been installed. The memorial widow was designed and crafted by David Wright, a glass sculptor from Bellingham Washington, in four equal parts and depicts, in symbolic form, of the Creation. September 2020 celebrates the 50th year of the new Church Centre. 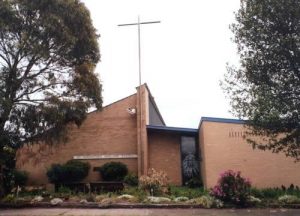 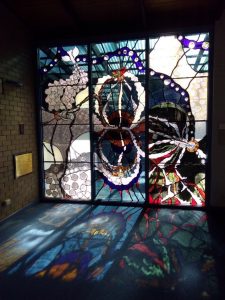