When Altona emerged from a sleepy fishing village in 1900 with a population of less than 50 living in 10 dwellings, to a growing community in 1921 of 515 inhabitants in 114 dwellings, it was still under the local control of the Shire of Werribee. Due to its somewhat remote location compared to the more popular areas of Werribee, this new community was mostly ignored by their governing body leaving them to look after themselves. 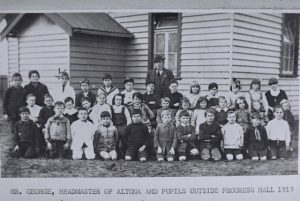 Walter Henry Howe was the energetic manager of the Altona Beach Estate company at the time who was the driving force behind the formation of the Altona Progress Association in March 1917. A public meeting at Altona House in Pier Street on 14 April 1917 resulted in the first committee being elected: president – Walter Howe (from the Altona Homestead); secretary – James Duke; treasurer – Mr Williams; committee – Messrs Burt, Carr, Fleming, Missen, Harrington, Merritt, Niel, Jackson, Raynor and Pringle.

The new organisation had a total of £7 and a promise from the Altona Land Co to donate timber and iron for building a hall on land they could rent at £1 a year, with the option of purchasing the land after five years.

Apart from a few working bees, Howe practically built the Progress Hall on his own, ensuring it was ready for use for its first event, the association’s Melbourne Cup Dance in November, 1917.

The Altona Progress Association regularly informed council of matters in Altona requiring its attention. Public conveniences improved by the association were subsidised by council to the tune of a paltry £10, while the association initiated tree planting, the building of a band rotunda and children’s swings. Howe joined other organisations that could benefit Altona, and contested an election for councillor that unfortunately did not achieve the outcome he would have wished.

Dissatisfaction over the lack of support from the Shire of Werribee continued so in December 1920 the current president, Richard Blomberg and Howe, now vice president, made the first representation to Williamstown council to annex the new Altona community, taking it out of Werribee’s hands. Williamstown couldn’t see any advantage in taking up this offer and it wasn’t until many years later after the establishment of the oil refinery in 1948 that Williamstown then tried to annex Altona and a share of the financial spoils the refinery brought to its local area.

It is with great pride we can say Altona’s first purpose built public building still exists today, although a little different from the outside since it now forms the greater part of the Altona Baptist Church in Sargood Street.

There is much more to be learnt about the Altona Progress Association, including full names for those first involved, but we didn’t want the need for more detailed investigation to delay celebrating the organisation’s momentous anniversary.