“Deeds that should not go unnoticed, Names that must not be forgotten”

World War 1 honour boards were erected in many local schools, halls, churches, workplaces, and public places as an instrument of acknowledging the commitment made by the local men and women to the great European War effort.

The criteria used for the inclusion of names, on an honour board, were determined by those creating the board and varied from town to town.  In many communities, honour rolls were the first type of memorial to hour those who had enlisted to serve in World War I. Most honour boards were manufactured and installed during the early part of the 1920s from a mix of materials, such as wood, stone and/or metal and some included photographs. 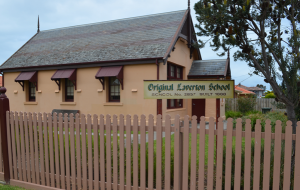 Wooden honour boards tended to be most common, and many are still on display in local communities. The type of wood used related to the budget of the community at that time

Laverton was a small farming community, when war was declared in 1914 and the local men were eager to enlist. For its population, as noted in the Werribee Shire Banner (20 December 1917), ‘the whole Shire had responded splendidly to the call of the mother country’ and a greater percentage of men claimed Laverton as their home or enlistment than any other place the same size. According to the honour roll, that appeared within the Werribee Shire Banner, there were 26 men from Laverton who enlisted to serve. Within Laverton, the primary school became a central locality for the local war effort. It served as a recruitment centre, operations for local Red Cross fundraisers and work efforts and a venue for welcoming home returning service personnel both during and at the conclusion of the war.

Given its pivotal role, that the primary school played during these war years, it was only fitting that the school committee instigated the purchase and design of the town’s honour board during 1922 which was installed and unveiled, within the school building on the 24 October of that year.

The board was constructed of walnut timber and was divided into three sections with two peace doves and olive branches adorning the top of the board. The left-hand side listed the names of past attendees of the school and the right-hand side listed the names of residents of the Laverton/Altona area. In the centre of the board is a cabinet which stored a book that contained a full record or history of the war that had been provided by the Education Department (Werribee Shire Banner, 5 October and 21 December 1922). It is not certain what has happened to this publication, but it is no longer within the cabinet. 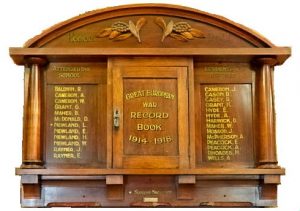 The honour board was unveiled, with much ceremony and celebration, on 24 October 1922 at a function at the school. Given that the board was to be displayed within the school building and that the board had been paid for by the school committee, it was unveiled by the then Director of Education Frank Tate CMG. Also attending the event was the local member for the electorate of Bulla, the Honourable Andrew Robert Robertson MLA, Bernard Maher the local councillor for the East Riding of Werribee Shire, the school committee chairperson William Henry Lohse and many residents from the local community including those veterans who had returned to live in the area.

The honour board was designed and made by F K Cox & Company who were a leading Melbourne furniture maker and manufacturer of house fittings. The company had been in operations, across Melbourne, since the 1890’s and by 1907 were employing as many as 150 trades people. The company operated out of Kensington but also operated premises within Prahran and in Lonsdale Street Melbourne.

In the early 1920’s they were being contracted to design, manufacture and install several World War 1 honour boards across Melbourne and rural Victoria. We are aware that this company also manufactured honour boards for the Lara, Lorne, Elmhurst and Torrumbarry communities all of varying designs.

As mentioned earlier, the Laverton honour board contains two listings of names. Those of past attendees of the school and the second listing those who were or had resided in the area. In total the honour board contained 26 names and reflected names that had been recorded within the honour roll published, throughout the war, within the Werribee Shire Banner. This was the criteria for the two lists, and it must be remembered that these were times where communication was completed by either word of mouth or by post.

During our research, of those listed on the board, we discovered one typo being that of D Harwick who was in fact David Warwick. This error may have either happened during the manufacture period or in the recording of the names from the Werribee Shire Banner. Additional our research revealed that there were a further four enlistees who were born in the Laverton area. These were Gilbert Eaton, Arthur White, Henry White and Arthur McPherson. Arthur was the brother of Alexander McPherson who had been included on the honour board. This was not seen as an error by the school committee or the listing in the Werribee Shire Banner publication. People only recorded what they were advised and what was known. They certainly didn’t have the communication systems that we have today.

We also identified three enlistees whose families had moved into the Altona area during the war period and who had returned to live in Altona when their war service was completed. These included George Duke, Charles Thomas and Frederick Thomas. Again, we don’t see this as an omission but simply that because their families arrived after the start of the war those in Laverton may not have been aware of their arrival and the newcomers didn’t see the need to report the names of their sons to the Werribee Shire Banner. You can only record and note what you know at the time, but our research has made note of their contribution to the war effort.

At the completion of this work, the honour board was restored to its original position where it has remained ever since. In October of 2022 it will celebrate 100 years since its original installation and unveiling. It remains as a reminder of the sacrifices made by these men and stands as a perpetual dedication of the town’s gratitude for their service to King and country.

The menu, on the right, list the names of each of the twenty-six young men listed on the honour board and their stories and also the names and stories of seven others who served and were either born or whose families were  living in the Laverton or Altona Bay area and who, for what ever reasons, were not included on the honour board but their stories still deserve to be included here.

Further information on other Honour Boards within the district following WWI refer to Wyndham History – http://www.wyndhamhistory.net.au/items/show/2665

[1] Both George Grant and John Cameron embarked but returned to Australia and then when they were medically fit embarked again.

Listing by Battalion or Service

The material contained in this publication is a result of the contribution of the members of the Altona-Laverton Historical Society who contributed knowledge, images, background, research, editing, proof reading and encouragement.

These included Ann Cassar, Graeme Reilly and Jim Hevey. We acknowledge the images provided to the Historical Society by Rob Newland on James Newland, William Newland, Alfred Newland, Herbert Newland, Ernest Peacock and William Cameron, and Glen Hyde on Abert Victor Hyde. We acknowledge a large number of images relating to various Battalions within WWI are courtesy of the Australian War Memorial.

Where mention is made of ‘ancestery.com’, this site was utilised to review electoral roll records, birth, marriage and death records, which were verified with the Births, Deaths and Marriage Victoria records.

Further information on other Honour Boards and the names of service personnel refer to http://www.wyndhamhistory.net.au/items/show/2665