William Joseph Maher was born in 1890 at Brunswick to parents Bernard Joseph Maher and Margaret Maher (nee Fox). William was the sixth child born to the couple and was seven years older than his younger brother, Bernard, who enlisted two years after William. The Maher family had moved into the Laverton area in 1912 and initially Bernard Joseph Maher worked as a commercial traveller before establishing a small business in the small town and a farm, known as ‘Laverton Park’, on the town’s outskirts.

The Maher’s became prominent members of Laverton community and the Werribee district when Bernard Joseph Maher represented the community on the Werribee Shire Council from 1914 representing the East Riding of the Shire. This which covered an area that also included Laverton and Altona. Bernard served on the Shire council for approximately 15 years including one term as the mayor in 1916.

William Joseph Maher initially applied to enlist within the first year of the war but due to strict medical benchmarks he was rejected because of the condition of his teeth. As the need for more men increased, this problem seemed to have been overlooked and at the age of 25 William applied again, on 15 July 1915, and was this time accepted.

By the 30 August 1915 Private Maher had completed his training at the Broadmeadows camp and was appointed to the 24th Infantry Battalion. The battalion embarked from Melbourne on 29 September aboard the HMAT/RMS Osterley with the 5th Reinforcements for the 24th Infantry Battalion. The battalion, with William Maher, disembarked in Egypt and were taken on strength with the 24th Battalion at Tel-el-Kebir on 10 January 1916. The 24th Battalion had just returned from Gallipoli and the reinforcements now brought the battalion back up to full strength.

Following this reorganisation and refitting of many units, the battalion moved to Ismalia on 2 February 1916, where they took over a section of the Canal Zone Defences at Sphinx about 10 miles east of Ismailia. They remained there until they were relieved on 16 March 1916, when they moved to Moascar. On 20 March the battalion embarked at Alexandria in three ships and six days later they were at new billets at Rebecq in Belgium where they underwent preparation for the Western Front. The battalion saw action at Fleurbaix (April 1916), L’Hallobeau (May 1916), Erquinghem and Rue Morle (June 1916). Private Maher and the 24th then took part in a major offensive around Pozières and Mouquet Farm in July and August of 1916.

On 2 August 1916, the battalion were resting in what was referred to as the Sausage Valley, and fatigue parties were carrying supplies up to the front line.  It was while performing these duties that Private William Maher was injured, when he received a gunshot wound to his left hand. William was treated by the 3rd Casualty Clearing Station, the Ambulance Train and then sent to the 4th General Hospital at Rouen for three weeks recovery.  After a further week at the 6th Convalescent Depot at Rouen, he was able to return to the 24th Battalion on 29 August.  The battalion had just come from the line at Mouquet Farm, in French area near Somme, and were now resting and regrouping at Bonneville.

In October 1916, the Battalion was moved up into the Ypres area, before moving to Longueval, France in November. Here they worked on the roads and the railway lines, which was undertaken in between the times that they were required to serve in the front-line trenches.

During front-line action, in the Montauban area on 24 December 1916, Private Maher was wounded for a second time. He received a gunshot wound to the side of his face and was treated by the 5th Australian Field Ambulance and the Casualty Clearing Station, before being admitted to the 10th General Hospital at Rouen, France. After receiving treatment there and spending time convalescing, Private Maher was transferred to the No.2 Commonwealth Base Depot in Rouen, on 12 January 1917.

Before he was fit enough to return to his battalion, William was admitted to the 26th General Hospital at Etaples, on 16 January 1917, suffering from scabies. He was passed to the 25th General Hospital for a month of treatment before he was evacuated to England aboard HS Cambria. On 13 February 1917 he was admitted to the Canadian Ontario Military Hospital at Orpington in Kent, where he was diagnosed with having ‘Impetigo’. William remained there for about two months, before being transferred across to the 2nd Auxiliary Hospital at Southall Middlesex on 12 April 1917.

Private Maher appeared to have been suffering with additional medical issues. He was transferred from the 2nd Auxiliary Hospital to the Middlesex War Hospital at Napsbury, on 1 May 1917, and remained under their care for about two months. The main role of this facility was providing care for patients experiencing mental symptoms. It was while he was in their care that William was diagnosed with ‘Melancholia’ and it was decided that he would return to Australia “…for a change”.

On 21 July 1917, Private Maher embarked for Australia aboard HS Euripides, and arrived home on 18 September. One month later, on 24 October, he was discharged from the Australian Imperial Forces, as ‘Military Unfit’.

Effective from his date of discharge, William Joseph Maher was granted an Incapacity Pension of 30 shillings per fortnight. The Laverton community held a grand welcome home event on 14 October 1919, when 14 local volunteers were presented with inscribed medals from the Werribee Shire council. Private William Joseph Maher and his brother, Bernard Maher were both recipients at this function.

The Victorian electoral rolls show that William Maher lived in the Laverton area between 1919 and 1931, and that he was employed as a labourer. During that period, in 1923, he married Irene Marjorie Baines and the couple eventually moved to Church Street in Abbotsford around 1931.

During the 1930’s and 1940’s the family lived at various addresses in the Abbotsford/Richmond area, and William worked locally as a foreman by 1942. Throughout the 1960s William was working with the local Council. 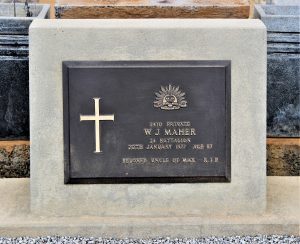 William Joseph Maher passed away on 20 January 1977, aged 86 years, and is buried in the Melbourne General Cemetery. Unlike his younger brother, Bernard, he is not buried near his parents within the cemetery. William’s wife, Irene Maher, continued living in the Abbottsford area but passed away in April 1984, aged 76, and is buried within the Boroondara cemetery.