The Methodist Church held its first service on Sunday 10 May 1931 at 7pm, the speaker was Mr Russell Orton of Queens College.

The service was held in Parham’s Hall, situated on the north east corner of Pier Street and the Esplanade where a small park is now established. The building, with the hall at the rear, was a confectionery shop facing Pier Street.

Wooden seats without backs was the order of the day and the owner, bedecked in his white apron and who liked to attend the service, would sit at the rear waiting for the shop bell to ring signalling a customer to be served. He would leave the service, supply the needs of the customer and the bell attached to the door would again ring as the customer left. The owner would then return to the service to await further customers.

Although this site was unsatisfactory for worship, services continued whilst an alternative venue was sought. At Parham’s Hall, the church worshipped until 29 October 1931. In November 1931 a more suitable place of worship was found at Marion’s Hall, Queen Street, Seaholme. Owned by Laurie Marion’s parents (Laurie later was a Trust/Property Board secretary), the hall was used for all types of entertainment, the MU Lodge, and some classes of the Seaholme Primary School before the school building was completed.

Before a worship service could begin, school desks would have to be moved and stacked against the walls unless the desks had been removed for a dance held the previous night. This being the case, sweeping the dirty floor and removing empty bottles had to be carried out before the portable pulpit and piano were positioned for
the commencement of the service.

The church’s home for the next 16 years was Marion’s Hall. Subsequently burnt down about 1960, its demise has left two vacant blocks and unfortunately no pictures of the exterior of the hall are available.

In 1934 Mr Smith from Queensland, a faithful church member, donated two vacant lots of land in Seaview Crescent, Seaholme for church use. In 1935 a special committee meeting of the Church Trust, the Reverend Courtney Thomas, the Reverend JJ Webb, Messrs W Morgan, R Rolley (Williamstown Circuit), C Walker, SH Scott and Mr Gregory, deemed this site unsuitable for a church and offered it for sale at £1 per foot or £1.10.0 on terms for five years.

A more central church site was secured at the corner of Queen and Bent Streets, the land being 77’7″ to Queen Street and costing £77.10.0 and ratified by £1 deposit. 1938 brought news of an old hall belonging to the Church of England in Kororoit Creek Road being offered for sale, but after inspection ruled out its purchase because of deterioration of materials. The trust decided to obtain an estimate for a new building. 1941 was full of surprises. The Ladies Guild, after consultation with the Reverend TH Woodford, offered to purchase a block of land in Seves Street (the present church site) and donate same to the trust. Naturally the trust was delighted as it was considered a more suitable site for a church than the one in Queen Street.

On May 22 four trustees resigned, Messrs Scott, Gregory, Morgan and Rolley, to be replaced by Mrs E Beed, Mrs A Marion, Mr W Rattray and Mr A Walker. The block of land in Queen Street was sold for £95 and a loan of $150 requested from the Loan Fund towards the building to be erected in Seves Street.

In 1942 Mrs A Neale was elected to replace Mrs Marion (deceased 1941). In 1943 the trust gave consideration to purchasing Marion’s Hall for £370 on the blocks for removal to Seves Street but the price was thought excessive and no action was therefore taken. On the 12 March Mrs Eva Philipps was elected a member of the trust.

A request in 1944 to erect a church building at Seves Street was approved by the wartime government. By 1947 after years of voluntary work by a faithful few led by Mr W Rattray, a constant source of inspiration and a hard worker, the building was nearing completion. In January 1947 Mr Tyrrell offered the church the adjoining block (now the site of the Sunday School Hall) for £120. This was purchased for £102 as the wartime government regulations deemed the price excessive. In April of that year Mr Eric Scherman became a member of the trust replacing Mr Vertigan.

The new church was dedicated by the Reverend Calvert Barber on Saturday 20 September 1947 at 3.30pm. This was followed at 5.30pm by a tea and then a concert led by the Newport Ladies Guild. Tickets 1/6. On Sunday 21 September the opening services were conducted by the Reverend Gus Wilson at 3pm and the 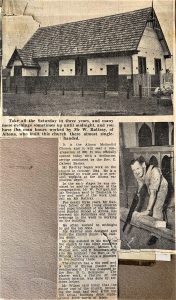 Reverend A Pederick at 7pm.

In 1951 two new trustees, Messrs E Bertram and R Stebbins were welcomed. Mr Stebbins shifted from Altona in 1954. On the 22 February 1952 the first flower show was held and proved the forerunner of many successful exhibitions attracting numerous visiting competitors. Also included were sewing and cookery sections. Mrs E Bertram was the instigator of the flower shows.

Marie Millett was the first deaconess, followed by Betty Cook in 1954, Betty Couper in 1958, Laurel Lake in 1960 and finally Millie Buchanan in the late 1960s. The Ladies Guild celebrated their 21st birthday on 28 April 1953. December 1956 saw the church family take a huge step forward in financing the proposed youth hall. The Wells Fund-raising Scheme was adopted and the function held at the RSL Hall on 13 May 1957 attended by approximately 200 people. The £6,500 target was exceeded by £500.

The first stumps of the youth hall were sunk in November 1960 by the builder Mr RV Smith and in 1961 the excellently designed hall was completed on 29 April. The official opening was performed by the Reverend CK Daws, managing secretary of the church in Victoria on Sunday 30 April at 2.45pm.

The Methodist Goodwill Centre opened in 1965 was the brainchild of the Reverend John Adamthwaite. The first centre was at 101 Pier Street, north of the railway line (the old Westgate TV shop) and supervised by Mrs Isobel Kirk. Later the centre transferred to a small shop in Sargood Street supervised by Mrs J Scherman and then Mrs B Taylor. The Goodwill Centre’s objective was to pay for the Queen Street manse and has been most successful in this regard. (Today the centre is in Harrington Square and supervised by Mrs J Bryans and Mrs M Joyce, secretary).

In 1973 a Laverton Property Board was formed consisting of Messrs E Bertram, A Chambers, A Tan, E Scherman, E Mitchell, K Parkin and R Watson for the three blocks of land at the corner of Alma Avenue and Jamieson Street.

At the time of union in 1977, the church trustees were Messrs W Rattray, E Bertram, A Chambers, A Tan, E Mitchell, I Frost, K Parkin, E Scherman and A Vost.

The early 1950s saw some feverish activity in Altona when the Reverend Arthur Absolom, the then minister of St Stephens Presbyterian Church, North Williamstown, received notification that a grant of £5,000 would be available from the Connabere Trust for the building of a new church at Altona. 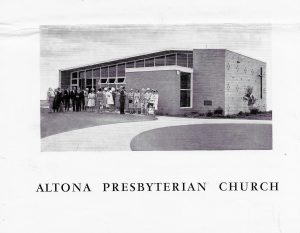 Busy days of door knocking brought sufficient support for the first meeting to be held at Les Croft’s home, 70 Civic Parade, Altona. Some services were held at Noordenne’s (Upton Street) and then moved to the Salvation Army Hall at 9.30am each Sunday.

In 1960 the foundation stone was laid by the Reverend Frank Camp in the wide-open spaces of Altona West – what a change today! 1961 saw the opening of the present Civic Parade Church built by Lou Noordenne at a cost of £5,000.

June 1977 saw the Methodist and Presbyterian Churches of Altona unite as part of the Uniting Church. Together they formed one congregation though for a time worshiping separately. 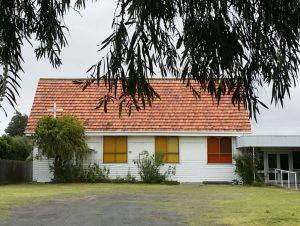 The two morning congregations fused after some months and met from then on at Trinity, Seves Street. The evening service moved from Trinity to Civic Parade. The minister of the pre-union Methodist Church, the Reverend Wallace Barns, was the first minister of the Uniting Church. The newly inducted member of the  Presbyterian Church, the Reverend Bernard Long, became associate minister.

The parish is most fortunate to have four accredited and dedicated lay preachers, Mr J Finney, Mr E Mitchell, Mr K Thompson and Mr A Tan, who assist in the conduct of services of worship.

The first secretary of the Parish Council was Mrs Vi Gunther who still holds this position. The treasurer was and is Mr E Mitchell. Mr Graeme Murfett was elected chairman of the Council of Elders and Mr Keith Thompson secretary. After several years service Keith resigned for health reasons and was replaced by Mrs Betty Watson.

Under the initial encouragement of the Reverend Barns, out-reach work commenced at Altona Meadows and after a rather shaky beginning this shows signs of real growth and development. The congregation meets in the Powlett Street Day Kindergarten. The Altona parish has been vitally concerned with the work of the Altona Council of Churches since its inception.

The Sunday School which has an attendance of approximately 60 children celebrates its fiftieth anniversary later  in this year. It has a staff of 14 teachers and helpers with Mr E Scherman superintendent and Mr R Watson secretary.

There has been growth in both afternoon and evening fellowships. The former under the leadership of Mrs Grace Hope and the latter under Mrs Ros Long.

Youth groups have fluctuated and the present group (1981) has some 12 members, the president being Heather Crofts, the secretary/treasurer Peter Davis. Bible Study, and Prayer, Care and Share Groups have had varying success.

There have been several special efforts since union – Operallenge, a spectacularly successful Indonesian evening, square dances and family camps.

In May 1981 the Presbytery of Maribyrnong Valley agreed to the request of the Reverend Wallace Barns that he be released from settlement as Parish Minister of Altona. He is continuing ministerial work in Altona until the end of July. Deaconess Dorothy Cannon is now working part-time in the parish.

Betty Watson and Graeme Murfett have regularly, with Bernard Long and Wallace Barns, represented the parish at presbytery level where Betty has given sterling service as first secretary and now deputy chairman. The time since union has been a time of learning to live together but new work is also being carried out.