Altona’s Truganina Explosive Reserve is situated 26 kilometres west of Melbourne and 9 kilometres from Williamstown on the shore of Port Phillip Bay. The Reserve was established by the State Government in 1901 for the storage and handling of commercial explosives.

The manufacture of explosives, mainly gelignite and dynamite, had commenced in Deer Park in 1873 predominantly for the quarrying and mining industries. Other uses for the explosives were for road construction, dam building and tunnelling. These explosives were stored in specially designed buildings called magazines, along the Maribyrnong River, upstream from Footscray until it was necessary for them to be shipped to work sites in other parts of Australia, New Zealand, New Guinea and the Pacific region. Prior to explosives being produced in Australia, they were imported from England and South Africa. 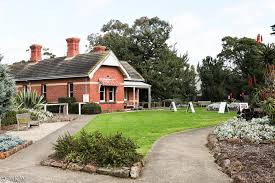 With the development of Footscray into a bustling metropolis, it was felt that the storage and handling of explosives should be moved to a more isolated site. In 1900, the population of Altona was less than fifty, with a total of fifteen occupied dwellings. Situated less than four kilometres from Laverton station, Truganina Reserve was seen as the ideal site for a new explosives site, because of it’s water frontages, and remoteness from populated areas.

Much of the land in the region was owned by George Thomas Chirnside who agreed to swap 555 acres (225 hectares) for 633 acres (256 hectares) of lesser quality land with the Victorian Government in 1896.

Act 1456 of the Victorian Government was known as the Powder Magazines Act of 1896. The act empowered the Governor in Council to exchange that lands for the purpose of establishing an Explosives Reserve and the power to construct and manage a tramway line. The tram line commenced on a jetty built into the Altona Bay, proceeded through the Truganina Reserve, along Queen Street to Merton Street and terminating at the Laverton railway station. Management of the Reserve and operation of the tramway was vested with the Commissioner of Trade and Customs. Enclosed by a galvanised fence, two and a half metres high, the site was officially opened on May 1st, 1901.

THE NEED FOR SAFETY

The utmost concern was given for the careful manufacture, carriage, handling and shipping of the explosives, to ensure personal and community safety. Explosives were carried by rail – in railway explosives vans from the Deer Park factory to the Laverton Railway Station. From there, the explosives would be hand lifted in chain gang style from the vans into horse drawn trucks.

The Clydesdales would then haul the load down the tramlines to the Explosives Reserve (also known as-a powder reserve) at approximately 4.5 kilometres per hour. The total length of the tramway was 133 chains or 2.7 kilometres. The section of the line continued in operation until 1936, when it was replaced by road transport. Upon arrival at the Reserve, the explosives were stored in the powder magazines until they were despatched to ships. 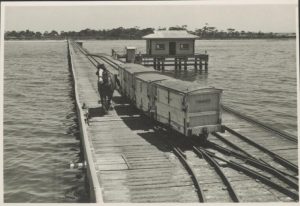 Tramway and Carriages on the Jetty

Each magazine was approximately 9 metres by 5.5 metres in size, and could contain 20 tonnes (20,000 kilos) of explosives. The explosives were stacked on benches so that air could be circulating around the boxes at all times. Boxes containing explosives were constructed with brass nails, to minimise the possibility of sparks occurring.

Staff involved in the handling of the explosives were instructed to wear leather aprons to protect their clothing and canvas overshoes were worn at all times. Most working men wore hob nailed boots, but these were deemed too dangerous because sparks could fly from the boots and start an explosion. Surrounding each powder magazine was a large hill of soil. These mounds protected the workers and their families from explosions that could occur in the magazine. If such an explosion was to occur, the mounds had been designed so that they would collapse on to the magazine, buffering the explosion and containing the damage. Nine transports of explosives arrived each day, each containing 200 cases of explosives, of 50 pounds each (22.7 kilos). 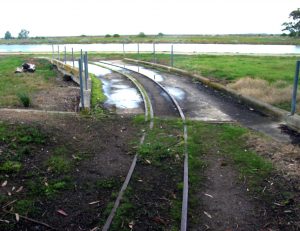 Remains of the Tramway at the rear of the Reserve

When it was time for the explosives to be despatched to other ports and worksites, boxes of explosives would be carried on the trucks down one of the three tramways along the pier to a waiting explosive lighter for the next part of their journey. Explosive lighters were specially designed engineless vessels that were towed to the jetty from their resting places in Williamstown by tug boats. The following were some of the sailing vessels used regularly in the explosives trade: The Alma Doepel, Argonaut II, Huia, Failie, Wongala, Merilyn, Evaleeta, and Joseph Sims. 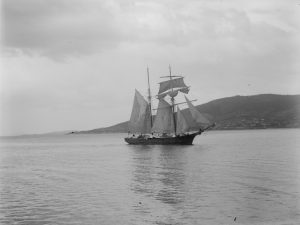 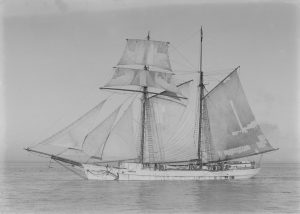 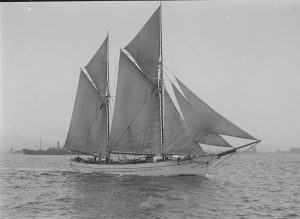 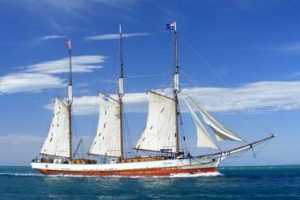 They were either ketch or schooner rigged. Of the motor vessels, the Pirri, Lady Isobel and the Taranui were prominent.  Memories of some of these vessels linger in the names of streets  in the Altona Bay residential estate, such as Alma Doepel Drive,  Argonaut Place, Huia Close and Piri Grove. Vessels, whilst loading or unloading explosives were required to anchor at specified anchorages offshore. The isolation of these anchorages was determined necessary to protect the port against any serious structural damage, if an explosion was to occur. Again the cargo was hand loaded into the hold of the lighter, and then towed to the vessels waiting at the powder anchorages and again unloaded into these vessels where they could be despatched for the final leg of their journey.

By 1950, the explosives industry in Altona had really reached its peak. Sixty one magazines were in operation (fifty two owned by Nobels, later to be known as I.C.I.; and nine owned by the State Government. A workforce of twenty six men was employed on the Reserve, and nine horses were involved in the pulling of forty three wagons.

The explosives site and anchorages were responsible for the greater proportion of commercial explosive requirements for Australia and New Zealand. By this stage, the population of Altona had expanded to 4000 with a total of 1100 occupied dwellings. The question of the safety of the Altona township was noted and plans for the removal of the explosives site were investigated. 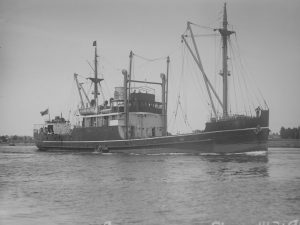 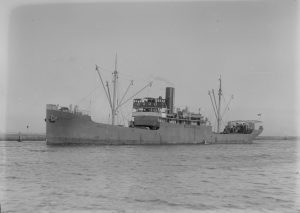 In 1952, the Commonwealth Government began investigating a more isolated site for the handling and shipping of explosives, and by 1957, a site at Point Wilson at the North Eastern end of Corio Bay had been secured. Situated approximately 15 kilometres from populated areas, construction began in 1958.

THE END OF AN ERA

On May 11 1962, the auxiliary sailing vessel Failie was the last to load out of the Truganina Reserve and all remaining explosives were transferred to Point Wilson. The first shipment out of Point Wilson was on the 25th of May 1962.

‘Following the closure in 1962 of the Truganina for explosives storage, the Victorian Government sold off most of the land, but retained 16 hectares for use of the then State Occupational Health and Safety Authority ( now Workcover Authority) for the testing, trials, demonstrations and destruction of dangerous items, a use which ended in 1994. In 1976, 0.8 hectares of the 16 hectares was transferred to the State Environment Protection Authority for use as a vehicle testing station, but this use was terminated and was declared surplus to EPA requirements in June 1999.

In June 2000 the Victorian Government appointed the Hobsons Bay City Council as the committee of management to administer the former Truganina Explosives Reserve as recreational parkland.

Archaeological studies of the area have unearthed many stone artefacts including anvils, hammer stones and ground edge axes indicating that the land, close to water and rich in vegetation and native grasses, was occupied by Aboriginal tribes within about 6,500 years ago. Aboriginal remains have also been found on the estate, and along with the artefacts, indicate that the area was favoured for camp sites. The area forms part of the traditional land of the Yalukit-willam clan who occupied coastal land that extended from the Northern shores of Port Phillip to Wilson’s Promontory.

Little is known of the life style of the Yalukit-willam Clan and the Wurrundjeri Tribe Land Compensation and Cultural Heritage Council are the cultural custodians for this clan estate.