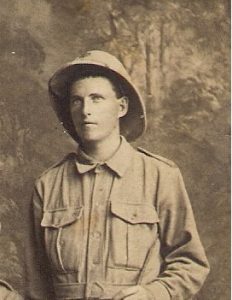 William Duncan Cameron enlisted for service in the AIF on 19 February 1915, a few months before his 19th birthday. The Great War was not yet six months old and given his young age, William required his parent’s permission to enlist which they gave. William was the first, and youngest, of the three Cameron brothers who served their country in World War 1. His two elder brothers, John Alexander and Alexander Ronald, enlisted less than a year later. William’s motivation to enlist may have been due to his friendships with Ernest William Peacock and Alfred Lindsay Newland, both of which had also enlisted on the same date.

William was born in 1896, in the town of Clyde, about four miles south-east of Cranbourne, to parents Alexander John Cameron and Agnes Cameron (nee Spitty), being their fourth of eleven children. The family had moved into the Laverton area around 1910 and William finished his education at the Laverton State School.

At the time of his enlistment, William noted his trade as a Laborer.  He may have been working at the Government’s explosives reserve, which was east of Laverton and close to the Altona township. It was reported that by the end of April 1915, 15 local men form the reserve had enlisted and were now at the AIF Broadmeadows training camp.

William Cameron completed his training on 1 May 1915 and was appointed to the ‘C’ Company 22nd Infantry Battalion. Scarcely a week later, the now Private Cameron and the 22nd Battalion embarked from Melbourne on 10 May 1915 on board the HMAT A38 Ulysses, bound for the Mediterranean and Egypt. Joining him, both in ‘C’ Company and aboard the Ulysses, were fellow Laverton enlistees and his friends, Ernest Peacock and Alfred Newland.

After arriving in Egypt to climatise and undertake additional training, the men of the 22nd Battalion were ordered to the Gallipoli peninsula as reinforcements. The 22nd Battalion very soon found themselves off the Gallipoli coast in the early hours of 5 September 1915 and were disembarked in five large barges. Once onshore, they were then required to walk just over three kilometres to their dugouts. The 23rd Battalion preceded them ashore and the 24th Battalion followed them later in the day. Landing on the beach was done under heavy fire from the Turkish forces who occupied the high ground. The 22nd Battalion first occupied the southern end of the peninsula at Number 2 Section close to Lone Pine.

On 9 September 1915, their unit war diary recorded that the 22nd continuously came under heavy Turkish shelling in the Lone Pine trench. It was during this engagement that the young William was wounded. He was first admitted to the 1st ACCS (Australian Casualty Clearing Station) with a shrapnel wound to his face and head.  After initial treatment, he was admitted to the 6th Field Ambulance and then transferred to the hospital ship Maheno. He was conveyed to Malta where he was admitted to the Cottonera Military Hospital on 2 October 1915.  He remained there for just two weeks before he embarked for England on board the hospital ship Brasile.

Back in the safety of England, Private Cameron was admitted to the 3rd Wandsworth London Hospital for more treatment to the shrapnel wounds on his face. On 17 November 1915, after three weeks treatment, he was discharged from hospital and reported to the No. 5 Australian Intermediate (Convalescent) Depot at Bostal Heath. During his stay in hospital, William received a letter from a Miss Hocking from Bendigo who, like many others in Australia, wrote comfort letters to soldiers who were recovering. In January 1916, Private Cameron sent a letter of thanks to Miss Hocking for the scarf that she had sent via the Red Cross. He mentioned that he might be returning home soon because he had lost sight in one eye at Anzac Cove, Gallipoli, where his battalion had landed and formed a base. However, his sight seemed to improve so his return to Australia did not eventuate. It was decided that he would rejoin his unit, who were now on the Western Front. On 9 June 1916, Private Cameron was discharged from hospital in England and returned to the 22nd Battalion, who were stationed at the Bois Grenier Line.

After a period on the front line, the battalion marched over several weeks to new billets in Albert, France. On the way, they marched through Blanche Maison, Breilly, Rainville, Puchvillers, and Lealvillers before arriving at a place known as the Sausage Valley (Sausage Valley was so named because the British soldiers saw that the German army had an observation balloon which was ‘sausage-shaped’). On 27 July 1916, the 22nd Battalion relieved the 6th Battalion in the front line that was now just past the village of Pozieres.  During the heavy shelling on the first day, the 22nd Battalion lost one officer and 19 other ranks. A further five officers and 129 men were wounded, while also 19 other ranks went missing.

The battalion suffered heavy casualties every day of the battle until they were withdrawn from the line on 31 July 1916. However, less than a week later, the men of the 22nd Battalion went back into the front line as part of a planned advance.  During the second day of their return to the front, casualties were reported as being heavy due to enemy artillery fire, but the battalion held its ground. It was during this fighting that Private Cameron was again wounded.

Suffering this time from a gunshot wound to his shoulder, Private Cameron was admitted to the 8th General Hospital in Rouen on 8 August 1916.  The following day, he embarked from Havre aboard the hospital ship Maheno and returned to England. On arriving back in England, William was admitted to the Beaufort War Hospital in Fishponds, Bristol, where he was treated before being discharged on 8 September 1916. Private Cameron was then transferred to the No. 2 Australian Command Depot at Weymouth.

This base had been established to house men who were not expected to be fit for duty for at least six months. William remained there for a month and was then transferred to the 6th Training Battalion at Rollestone/Larkhill. He remained with the 6th Training Battalion until 13 February 1917 when he took ill again and was admitted to the Brigade Hospital at Perham Downs. A month later, he was transferred to the Group Clearing Hospital at Sutton Veny.

Three months later, William developed pleurisy (inflammation in the lungs) and was admitted to the Military Hospital at Tidworth for treatment. His condition did not improve so he was then transferred to the Brigade Hospital at Perham Downs for further treatment. Once recovered, he returned to the Group Clearing Hospital at Sutton Veny.

On 1 March 1918, a Medical Board classified William as ‘C1’ which was classification for ‘Fit for Home Service only’. This meant that he would remain at Sutton Veny for the remainder of the War. He remained in England until after peace was declared on 11 November 1918. On 2 January 1919, he embarked from England on board HMAT A35 Berrima and arrived in Melbourne on 17 February 1919. He was discharged from the AIF on 29 April.

Prior to his discharge, William returned home to Laverton and was welcomed back by the town and Shire, along with returned soldiers from the district, at a function held in the Werribee Mechanic’s Hall on 16 April 1919. The Shire President (Denis Canny) extended a hearty welcome home and expressed sincere appreciation on behalf of all the shire residents, presenting each man with a suitably inscribed gold medal.

Shortly after his return to Laverton, William moved to Kelly Street, Werribee. In this same year, on 4 June, he married Yvonne Blanche Atchison in St Francis’ Church, Elizabeth Street Melbourne. The couple then moved to Diggers Road in Werribee South and took up farming. Yvonne was the daughter of Bernard Michael Atchison and Jessie Amelia Atchison (nee Miller). Bernard had also served in WWI. Whilst serving overseas, his wife Jessie passed away, leaving Yvonne in charge of her two younger siblings until their father returned home.

William successfully applied for and been granted land in Werribee South under the Discharged Soldiers Settlement Act of 1917. The farm was in two parts being allotments 23 and 24A. The Discharged Soldiers Settlement Act of 1917 was an extension of the previous Land and Closer Settlement Acts. These acts ultimately made special provisions for farmland settlements by returned soldiers from WWI, representing the government’s actions to express to the thousands of returned soldiers the gratitude of a nation.

To obtain a block of land, an applicant was required to prove that they had extensive farming experience. The Werribee Irrigation Settlement, in Werribee South, was a subdivision of the Werribee Park Estate, where allotments were granted under both the closer settlement and the discharged soldier settlement acts. Initially the area was farmed for lucerne, dairying and poultry, but over many years changed to market gardening.

By 1923, William and Yvonne had three children but unfortunately in June 1923, their marriage ended when the couple separated. William remained on the farm with his children and in 1924 he married Catherine Charlotte Watt (nee Harris), who had separated from her husband in earlier that same year. Catherine then moved to the Diggers Road farm where the couple had a further three children.

Along with their growing family, William’s brother Archibald also moved onto the farm, with the electoral roll noting his occupation as a fisherman. William also enjoyed fishing but sadly, on 1 June 1939 whilst removing his boat from the mouth of the Werribee River, he suffered a severe heart attack and died. His daughter who was with him raised the alarm.

It had been known that, over a long period of time, William had suffered with a weak heart.  William Duncan Cameron was buried in the Werribee Cemetery on 2 June 1939, aged 43 years old, alongside his parents, Alexander and Agnes. He had been a farmer in the Werribee South area for many years, becoming well and favourably known by others in the district. He was survived by his wife Catherine and their seven children (Douglas, Margorie, Gordon, Kevin, Elizabeth, Francis and Allan). Catherine moved off the Werribee South farm and into Werribee living in High Street. Catherine passed away in 1964 and is buried alongside her husband within the Werribee cemetery, but her name is not listed on the existing headstone.

Two of their sons, Douglas and Gordon, served in World War 2. Douglas serving in the Army, whilst Gordon served with the Royal Australian Navy. Additionally, two of William’s younger brothers, Archibald Gordon and James Allen Cameron served in the Army during World War 2.

The photo below (Courtesy: awm.gov.au/collection/C438) shows the men of the 22nd Battalion, going into the line at the southern part of Lone Pine to relieve the 6th Battalion. 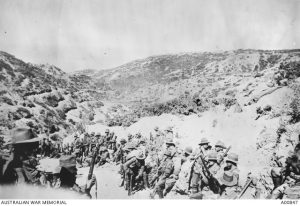