Arthur Albert Wells was born 30 January 1893 in New Norfolk, north-west of Hobart, to parents William Wells and Eugene Jessie Wells (nee Triffitt). Arthur grew up in the Hobart area, the second youngest of six children and was working as a motor mechanic when war broke out and young men were asked to enlist. Arthur moved across to Melbourne, in early 1916 and moved to Laverton to enlist into the newly formed Australian Flying Corps. Arthur’s father passed away on 4 September 1915 and by this his two brothers had already enlisted.

His elder brother Charles Wallace Wells enlisted on 18 August 1914 in Western Australia and served in the 11th Infantry Battalion at Gallipoli where he was wounded on 25 April 1915 and was shipped back to Australia. Charles moved back to Hobart to live and support his mother and family. Arthur’s younger brother, Alfred Justen Wells enlisted on 4 December 1916 in Hobart and served in the 1st Machine Gun Company as a private in France, returning to Australia in 1919.

Arthur enlisted with the 2nd Australian Flying Squadron, ‘A’ Flight, on 16 October 1916 as an air mechanic at the age of about 23. The 2nd Australian Flying Squadron was based at Point Cook and had been raised at the request of the British to support their Air Force flying missions in France. This squadron was also known as the No 68 Squadron Royal Flying Corps and their main task was to escort larger, slower aircraft, seek out enemy aircraft and destroy them, and provide support for ground troop.

Private Arthur Wells completed his training and then embarked, with the squadron, on the 25 October 1916 onboard HMAT A38 Ulysses, along with Private Richard Casey, arriving in England two months later. It was while he was on voyage, across to England, that Private Wells began to feel unwell and as a result lost considerable weight, about two stone, and by the time he arrived in England his condition had worsened so was immediately admitted to the 1st Northern General Hospital in Newcastle.

He was diagnosed with tuberculosis and while he received immediate treatment arrangements were made for him to be transported back to Australia. In February 1917 he was taken aboard the hospital ship HS Karoola that arrived back in the port of Melbourne on 10 April 1917 and was taken directly to the No. 11 Australian General Hospital in Caulfield. 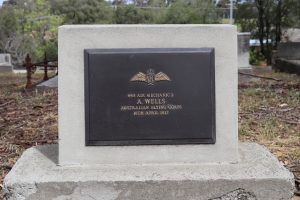 However, Private Arthur Wells’ condition had worsened and he passed away on 16 April 1917 at No. 11 Australian General Hospital, aged 24 and having served for just 6 months. Arthur Albert Wells was provided a military funeral and is buried within the Coburg Cemetery. Following his death his mother, Eugene Jessie Wells was presented with the Memorial Scroll and Kings Message (24 February 1922), Victory Medal (29 April 1921) and Memorial Plaque (21 March 1923).