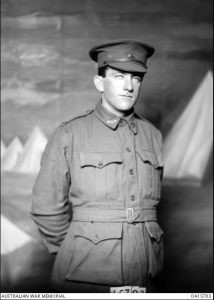 Donald McDonald (Jnr) was born in Laverton in 1888 to parents Donald McDonald (Snr) and Elizabeth McDonald (nee Bellinger). The McDonald family had been long-time residents of the Werribee area with Donald (Snr) working in the local area as a railway ganger. The first eight of their nine children were born within the Werribee district. The family moved to Laverton during the early period of its establishment with Donald (Snr) again working on the railway at the Laverton township. It was here that Donald (Jnr), their last child was born at the family home in Jamison Street.

Donald (Jnr) attended the Laverton school in Kiora Street, for his early education, and following this he obtained work as a labourer at the Government explosive reserve, located between Laverton and Altona. Donald (Snr) passed away in 1912 and so support for his mother would have fallen primarily to Donald (Jnr) given that he was 15 to 20 years younger than his three older brothers and was still living at home, in Laverton.

Donald McDonald enlisted in the Australian Imperial Force on 27 March 1916 in Melbourne. Between 11 April and 8 May he completed his basic training and was then transferred to ‘D’ Company attached to the 23rd Depot Battalion, Royal Park for two weeks (between 9 May and 26 May). Donald was subsequently appointed to ‘A’ Company of the 24th Depot Battalion between 26 May and 17 June 1916 before being sent to the Langwarren training camp between 17 June and 10 September 1916.

After this extended period of training, Private Donald McDonald was appointed to the 23rd Battalion’s 16th Reinforcements, stationed at Royal Park, on 25 September 1916, and prepared to embark overseas. On 2 October 1916 Private McDonald embarked from Melbourne on HMAT Nestor A71 and arrived in England six weeks later.

On the 16 November 1916, the 23rd Battalion were transported to the 6th Training Battalion at Larkhill in Wiltshire for further training. In mid-January 1917 Private McDonald was admitted to the Fargo Military Hospital in Birmingham suffering with influenza. Following two weeks of treatment, he was able to resume training at Larkhill prior to departing for France. On 4 February 1917 Private McDonald embarked at Folkstone for France with the men of the 23rd Battalion.

After time spent in various camps and being transported across France, by 31 March 1917 Private McDonald and the reinforcements were taken on strength with 23rd Battalion while they were resting at Becourt within the Somme area of France. Here they fought in the second battle of Bullecourt in May 1917 where they had captured all their objectives and held them until relieved. On the first day of that battle the 23rd Battalion suffered more casualties than on any other day of the war. Later in 1917 the 23rd Battalion moved to the Ypres sector in Belgium and in October of 1917 they participated in the battle to secure Broodseinde Ridge.

October 1917 saw the battalion in the support trenches west of Zonnebeke Lake in the Ypres sector in Belgium. During the day’s fighting their casualties were once again high with one officer killed and four officers and 32 other ranks wounded. One of those injured was Private McDonald who received a severe gunshot wound to his right knee.

After five months’ treatment and convalescence Private McDonald was sent to the Sandhill Camp, Longbridge Wiltshire to prepare for his return to the front. He embarked from Southampton on 20 March 1918 and was transported back into the 23rd Battalion six days later. At the time the battalion was fighting at Catacombs in Corbie within the Somme Valley.

In April of 1918 the battalion were part of the force that repelled the German ‘Spring Offensive’. Following this Private McDonald and the 23rd Battalion saw action in the battles at Hamel (4 July 1918) Amiens (8 August 1918) and Mont St Quentin (31 August 1918). However just prior to peace being declared, Private McDonald was wounded in action for a second time on 28 August 1918 while the battalion was moving into the front line near Herbecourt.

He received multiple gunshot wounds to his right leg and small (severe) shrapnel wounds to his back. After receiving treatment at the 6th Australian Field Ambulance and the 2nd General Hospital at Havre he was invalided back to England by 31 August 1918 where he was admitted to the 1st Southern General Hospital at Edgbaston Birmingham. On 23 September 1918 he was transferred to the 3rd Auxiliary Hospital at Dartford to convalesce and remained with them until 16 October 1918.

Just prior to Private McDonald returning to his battalion the armistice was signed and it was decided that he would stay within England rather than return to France. He returned to Australia aboard HMAT Orsova A67 on 8 January 1919 and disembarked at Melbourne on 27 February 1919. Private McDonald was discharged on 6 April 1919.

Donald McDonald was one of a group of soldiers, that had enlisted from Laverton, who were welcomed home at a celebration held in the Laverton school on 14 October 1919. Mr John Henry Lister, MHR, presented each soldier present with a ‘suitably inscribed medal’ on behalf of the Werribee Shire.

Around 1931 Donald became the Assistant Officer in Charge under William Grant and remained in this role through to at least 1949. Donald and his wife Christina remained on the reserve living in one of the houses on the property until his retirement.

The couple then moved to live at Riversdale Road Hawthorn to enjoy their retirement years, which is where they resided until Donald’s death on 18 July 1962 at the age of 74. Donald McDonald in interred within the Fawkner Memorial Park.  Christina McDonald, shortly after Donald’s death, moved to Williamstown to live and remained there until she passed away in 1973. Christina McDonald is also interred within the Fawkner Memorial Park near her husband.