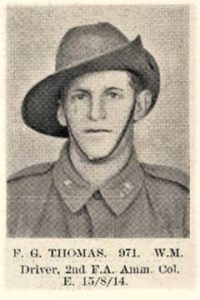 Frederick George Thomas, like his brother Charles Albert Thomas, was neither born in Altona nor did he attended the Laverton school prior to him enlisting into the Australian Imperial Forces during World War 1. Upon to his return to Australia, his parents were not only living in Altona but his mother, Alice Thomas, had established a thriving fruit and grocery business within the heart of Pier Street Altona.

Frederick George Thomas was born on 9 October 1893 in South Melbourne to parents John Berry William Thomas and Alice Thomas (nee Goodwin). Frederick was the third of five sons born to the couple. His three brothers being William John, John James and Charles Albert and his half-brother Alfred Ernest Goodwin. He was one of four Thomas/Goodwin brothers to enlist and fight at Gallipoli and then on the Western Front.

Frederick Thomas enlisted, just one month shy of his 22nd birthday, on 19 August 1914, just two days after his half-brother Alfred. Little surprise that they were both assigned to the 2nd Field Artillery Brigade and Frederick was appointed at the rank of driver. Prior to his enlistment Frederick was employed in Prahran as an ironworker’s assistant and had spent time in the school military cadets in Prahran. At the completion of his basic training, at Broadmeadows, he embarked from Melbourne with his half-brother on 20 October 1914 aboard HMAT Shropshire A9. Following his arrival in Egypt, Frederick was transferred to the Intermediate Base Depot at Mena until October 1915. Following this short assignment to shipped out to join his brigade at Gallipoli in mid-November. Within two weeks he was evacuated to hospital suffering an illness and joined back up with his unit in late December when they had been evacuated back to Egypt.

Frederick was again admitted to hospital in early January following which he undertook light duties within the Administration No. 2 Auxiliary Depot at Heliopolis, Cairo in Egypt. Following his recovery, he was transferred to the 21st Howitzer Brigade attached to the 101st Battery just before they left for the Western Front in France in April 1916. The brigade’s move to France to take over part of the line in the ‘nursery sector’ around Armentieres. On 23 July 1916, it joined the Somme Offensive where they captured the town of Pozières but at great cost. A second tour of Pozières followed in August and a third at Flers in October after a rest break in the Ypres sector. Frederick returned to hospital care at the end of October and re-joined his brigade in early December, but almost immediately was readmitted to hospital with quinsy (abscesses in the throat).

This required him to be transferred to hospital care at the 2nd Southern General Hospital in Bristol England. He recovered and took leave in mid-January 1917 for two weeks only to fall ill with pneumonia requiring more hospital treatment and respite. On 4 July 1917 Frederick married Mary Ann Bywater in Bristol. Mary was a nurse at the local hospital. Mary and Frederick may have met during one of his stays in hospital. After their honeymoon from which Frederick returned late by four hours and was penalised, he was transferred to the England Training Depot Signal Section in Larkhill. He then joined the 1st Division Engineers who were stationed at Abbeville France in December 1917.

In January 1918 Frederick joined the 1st Field Artillery Brigade and served with them within France until August when he was transferred back to England assigned for special transport duty back to Australia. On 15 September 1918 he boarded HMS Waterhen on submarine guard duty. On his arrival in Australia, he was granted ‘Special 1914 Leave’ due to the early date of his enlistment. He arrived home about a month or so earlier than his brother Charles.

It must have been the start a joyous occasion for the family and particularly Mrs Thomas who had already lost a son to the terrible war, but she now had one of her sons’ back home, and another on his way home. The family was united again for Christmas in their new home in Altona Bay. However, on a wet and rainy Boxing Day morning everything was about to change for the Thomas family and the small community at Altona Bay. Frederick and Charles along with their 14-year-old cousin Ernest Goodwin set out in the family horse drawn covered wagon for Victoria Market to purchase stock. A little before 5.00am approaching O’Hara’s rail crossing on Maddox Road, there was a fatal collision between the wagon and the goods train from Ballarat. Two of the boys died immediately from their injuries and the third succumbed soon.

A few hours after the accident, Mr John Thomas, father of the two soldiers, took the train at Altona for the city. He was then unaware of the sad fatality, but, looking out of the window of the train at O’Hara’s rail crossing, he saw the torn cushions and hood and smashed woodwork of the cart, and knowing of the young men’s early drive he immediately recognised the debris as belonging to the wagon which he had passed over recently to the use of his sons. On reaching Newport he made frantic inquiries regarding the mishap and to his horror his suspicions were confirmed, and he learned of the death of his two sons.

A military funeral was arranged for Frederick and Charles Thomas on Saturday 28 December 1918. Between 3,000 and 4,000 people gathered along Kororoit Creek and Cemetery Roads Williamstown on that Saturday afternoon. The funeral left Altona House, Altona Bay, for the Williamstown Cemetery at about 3.00pm. The coffins were borne on two gun carriages drawn by seven black horses. Each was enveloped in a Union Jack and on top were the overcoats and slouch hats of the two soldiers.

At the time of Frederick’s tragic death, his wife Mary Ann Thomas was still living in England but later travelled to Australia living with her in-laws at Altona House and was supported by the widow’s pension. When Mary Ann received delivery of Frederick’s memorial plaque and medals in February 1923, she was now living in South Melbourne and had remarried to Frederick’s elder brother William John Thomas. Together they had two daughters; Marjorie and Dorothy Mary.

Frederick’s medals and the following were presented: