Richard Joseph Casey was born in 1894 to John Casey and Margaret Teresa Casey nee Hart at Woodend in Victoria. Richard worked as a postal employee at Woodend and had served for four months with the Citizens Forces. His father was a councillor with the Newham and Woodend Shire and served as their president during the war years

At the age of 21 years 11 months Richard took his Oath and enlisted into the Australian Flying Corp (AFC) at the Sturt Street Recruitment Depot in Melbourne on 4 July 1916 and proceeded to the Laverton Base for training with the Reinforcement Australian Military Flying Squadron. While there he was appointed as a private with the 2nd Flying Squadron AFC on the 21 August 1916. 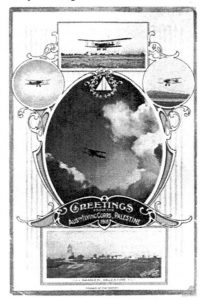 Postcard from A.F.C. from Palestine

Richard embarked at Melbourne on the HMAT A38 Ulysses on 25 October 1916 with No. 2 Australian Flying Squadron and the 1 to 4 Reinforcements having gained the qualifications of an Air Mechanic 2nd Class. After arriving in England he was attached to the 69th Australian Squadron Royal Flying Corps. In January 1917 Richard undertook a wireless course at South Farnborough and when returned to his unit where he was promoted to a 1st Class Air Mechanic. Following this he was then attached to the 37th Radio School at Scampton between March and May 1917. In August 1917 Richard was reclassified as a wireless perator and sent to the Halton Camp east of Oxford.

By the end of 1916 the Royal Flying Corp had 2,000 wireless operators mainly attached to artillery units to work with the spotting aircraft. They played a vital role as sometimes a gun battery would be out of line of sight of both the target and the spotting aircraft. Communication with the planes was mostly one way and employed Morse code to the aircraft and a response by the pilot using flares. By the end of the war the number of wireless equipped aircraft in the RAF had risen to 400 plus (possibly 500) with 1,000 ground stations and 18,000 wireless operators. By 1918 two-way wireless communication was increasing and this had the advantage that a Battery could signal

when it had fired and when the shells should arrive on target. This made it much easier for the aircraft to spot the fall of shot from the Battery it was servicing.

Richard was sent to France in November 1917 with No. 3 Squadron, AFC / 69 Squadron. The squadron was based at Bailleul in Northern France and were flying R.E.8 reconnaissance and artillery spotting aircraft. Early 1918 saw the squadron operate from a succession of airfields under the command of several RAF wings – 10th, 22nd and then the 51st. Like much of the Allied air forces the squadron operated at fever pitch during the German spring offensive to regain the initiative in the air and support the troops on the ground. In June the squadron played a similar role in support of French forces when the Germans launched their Marne offensive.

During February 1918 Richard was admitted to the 7th Australian Field Ambulance for treatment and then moved to the 7th General Hospital at St Omer in France. On regaining his health Richard was attached to the 3rd Squadron in May. In August he was appointed as acting corporal and was attached for duty with the 1st Division Artillery HQ in the field in France. At the time the 1st was stationed in the Villers-Bretonneux Corbie and Sailly-Laurette area and were heavily involved in vigorous patrolling and raiding action in and around Flanders.

The 1st Division was still at Messines when the Germans launched their final offensive starting on the Somme with Operation Michael on 21 March 1918. In the first week of April the 1st Division along with the 2nd began moving to the Somme when on 9 April the Germans launched Operation Georgette; an attack north and south of Armentières followed by a swift drive towards the vital rail junction of Hazebrouck.

Richard transferred back to No. 3 Squadron and the Australian Flying Corps in September 1918 and remained with the flying corps until after the armistice was declared.

In February 1919 Acting Corporal Casey was detached to 1st Division Artillery HQ and was stationed in the area around Morialme and were in the process of demobilising troops. In April whilst serving with the AIF Education Service he was promoted to acting sergeant. On 6 May 1919 he embarked for Australia on the Kaiser-i-Hind and arrived in Melbourne on 16 June. Richard was discharged from the AIF on 28 August 1919 and returned to his previous job with the post office. He received the 1914-15 Star, British War Medal and the Victory Medal.

Richard married Brenda Constance Fitzpatrick in 1921 and together they had one child a son born in Kaniva where the family had moved when Richard had been appointed to the position of Postmaster. By 1937 the family had moved back to Melbourne when Richard was appointed to the role of postmaster at Yarraville. The family then lived in the Yarraville up until the time that Richard retired when he and Brenda moved to Neerim Road Oakleigh. Richard passed away in Caulfield in 1966 in his 72nd year.

The following is an article that Richard wrote for the Woodend Star in 1919 that tells more of the Flying Corps, the wireless operators and the key role they played in WWI.