Albert Victor Hyde was born at Williamstown on 3 December 1892 the fourth child and third son of Alfred William Hyde and Elizabeth Ann Hyde nee Armstrong. By 1912 the Hyde family had moved to Jamison Street Laverton which was also the address given by Albert at the time of his enlistment on 2 July 1915. Albert was unmarried and was working as a Carpenter he was 22 years and 7 months old and about two years older than his brother Edward who enlisted in January the following year. He had also served in the Naval Cadets for about two and a half years in Williamstown where the family had been living before their move to Laverton.

Albert undertook his training between July and September 1915 and was appointed to the rank of private and transferred to the 8th Reinforcements 14th Battalion which embarked from Melbourne on 15 September 1915 aboard the SS Makarini. Before he left Albert’s fiancée Irene Newland gave him a locket which contained a photo of herself which he was to wear on a chain around his neck. 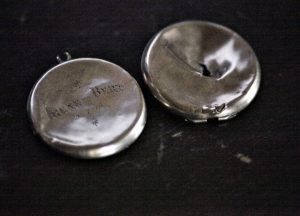 The locket that Irene gave to Albert which was to save his life.

The 14th Battalion was first raised in Melbourne in September 1914 as part of the Australian Imperial Force (AIF) which was an all-volunteer force raised for overseas service during WWI.

The men of the initial battalion had undertaken training in Egypt before taking part in the landing and subsequent campaign at Gallipoli on 25 April 1915. By the time the 8th Reinforcements had reached Gallipoli the 14th was involved in the offensive attacks upon Hill 971 and Hill 60. The offensive failed to achieve the breakout that it was designed to

achieve and a period of stalemate followed before the decision was made to evacuate the peninsula in December 1915.

Following this the battalion was transferred back to Egypt where the AIF underwent a period of reorganisation as decisions were made about their future deployment. As a part of this process the decision was made to raise a number of new units by splitting the existing battalions and using their experienced personnel to form new battalions with fresh recruits from Australia. During this time the 14th Battalion provided a team of experienced officers and non-commissioned officers to the newly formed 46th Battalion. It was at this time that Albert Hyde also found himself now attached to the 46th.

In mid-1916 the decision was made to transfer elements of the AIF to Europe to take part in the fighting in the trenches along the Western Front. Following their arrival in France in July the 14th Battalion’s first major engagement came a month later in the August of 1916 when they were committed to the fighting around at Pozières. Over the course of next two and a half years the Men of this battalion found themselves involved in numerous other battles. It was during this period that Private Hyde received the promotion to the rank of corporal and within another month found himself as acting sergeant whilst in the field of battle.

The battalion remained in the front line and had been engaging the enemy in small clashes during the bitter European winter. On 17 February 1917 whilst stationed in the trenches at the front Sergeant Albert Hyde had a miraculous escape from death while advancing across no man’s land when an enemy shell exploded in front of him. He received multiple wounds his right leg was fractured in several places and his body riddled with shrapnel. He was initially treated at the field ambulance before eventually being taken to hospital. The doctor was about to amputate his leg but fortunately Albert was conscious enough to plead with the doctor not to. An amount of shrapnel was removed from his body approximately 26 pieces but a large number remained. A piece of shrapnel shattered the locket that he was wearing around his neck and Albert credited this with saving his life and ensuring that he could return home.

Sergeant Hyde was eventually evacuated to Havre and then by ship, HS Warilda, to England. Here he was admitted to the Woking Military Hospital for further treatment, rehabilitation and rest.  Albert Hyde was finally discharged from hospital and embarked on SS A32 Themistocles from London on 5 November 1917.  On arriving in Australia Albert was discharged from the Army on 5 February 1918.  On the 28 December 1920 Albert Victor Hyde married Irene Victoria Newland the sister of James, William, Herbert and Alfred Newland, at the Wesley Church Melbourne.

Unfortunately their marriage was to be brief as Irene succumbed to her illness and passed away in May of 1925. However the couple did have one daughter Winifred born October 1921. Albert remarried on 9 September 1933 at St. Andrews Church Werribee to Doreen Lucy Kelly and they had two more children Imelda and Glen.

He went to work at the explosives reserve in Altona and remained working there for about forty years before being forced to retire due to suffering a heart attack.

Albert Victor Hyde passed away on 19 December 1962 aged 70 and is buried in the Altona Memorial Park. 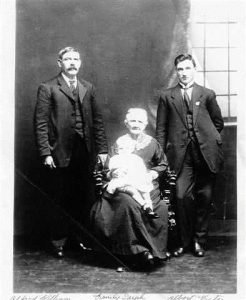