Alfred Henry Peacock was born in Footscray on 24 July 1898 to parents William Peacock and Lottie Edith Matilda Peacock (nee Tampling). William and Lottie Peacock, and their five children, moved from Footscray to Laverton in 1913. Alfred was the third eldest and had completed his education with the Footscray area prior to the family settling into the Laverton area and found work as a driver within the Laverton and Werribee district.  On 21 June 1918, a month before his 20th birthday, Alfred Peacock made the decision to enlist into the Australian Imperial. His older brother, Edward, had enlisted into the Australian Imperial Force in February 1915 and was still overseas serving on the Western front across France and Belgium.

As with many others of his age, Alfred had previous military experience serving with the Australian Light Horse, Area 65A in Footscray. Therefore, having this experience, Private Peacock was keen to join the Light Horse Battalion and undertook testing that would see him eligible for the light horse and volunteer for service in Egypt.

At this stage of the war, the Light Horse Battalion was still on duty within Egypt fighting against the Turkish forces near the Suez Canal. After successfully completing this examination Alfred continued his training at the Broadmeadows training camp but by the time that this was completed there was indications that the War was nearing an end and as a result he was not transferred overseas and therefore did not see any action.

Alfred was discharged from his service obligations on 24 December 1918 as demobilisation of the Australian Imperial Forces had begun both within Australian and overseas. He was able to return to civilian life in Laverton with his family and await the safe return of his brother.

By 1922 Alfred had left Laverton and was now living and working in Footscray. On 24 April 1926 he married Hazel Elizabeth Jewell of Malvern at Scots Church in Collins Street Melbourne. Following their wedding the couple took up residence in Grace Street in Laverton and Alfred continued to work in the Werribee and Laverton area as a driver.

Around 1938/1940, Alfred commenced work with the Victorian Railways which required the family to move across to the eastern Port Phillip Bay suburb of Frankston where they settled into a new residence. Frankston became home for the family for the next thirty plus years. 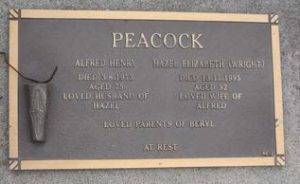