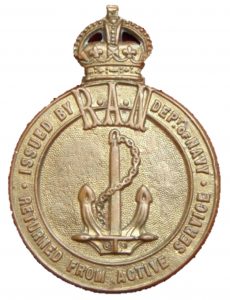 The Rayner family was one of the earliest families to settle into the Altona area shortly after the area was being sold as the latest seaside suburb of Melbourne. As the youngest, of the Rayner children, Ernest Moss Rayner born in November 1895 in Williamstown to parents Henry Rayner and Ellen Rayner (nee Cotterell). Given Henry Rayner’s long naval history, firstly with the Royal Navy in England and then the Victorian colonial, Navy it is not surprising that Ernest joined the Australian Navy.

Ernest Moss Rayner enlisted, at the age of 17, on 12 November 1912 nearly two years prior to World War 1 being declared. Prior to enlisting, Ernest appears to have been working within the local coal mines, with his brother James.

At the outbreak of World War 1, Ordinary Seaman Rayner was serving aboard HMAS Sydney which was on route north to join HMAS Australia. Both ships were intended to be used to protect the Australian naval and military forces around the Pacific areas of Rabaul and Anguar Island. HMAS Sydney was a ‘light cruiser’ built in Glasgow, Scotland for Australia and commissioned in June 1913.

The first significant Australian action of the war was the Australian Naval and Military Expeditionary Force’s landing on Rabaul on 11 September 1914. They took possession of German New Guinea, at Toma, on 17 September 1914, which included the destruction of the Anguar Island Wireless Station on 26 September 1914, and of the taking procession of the neighbouring islands of the Bismarck Archipelago in October 1914.

In October 1914, HMAS Sydney and her sister ship HMAS Melbourne detached from the flagship, HMAS Australia, and returned to Australia to form part of the escort for the first ANZAC convoy which consisted of some 38 transports. The convoy’s escort comprised HMAS Sydney, HMAS Melbourne, HMS Minotaur and the Japanese cruiser Ibuki. The convoy sailed from Albany, Western Australia on 1 November 1914 and on the morning of 9 November 1914 was steaming some 50 miles east of the Cocos Islands.

The message was in fact from the German naval cruiser Emden ordering her collier Buresk to join her at Point Refuge to transfer coal. Shortly afterwards the Cocos Island telegraphists signalled ‘Strange warship approaching’ followed later by the same message prefixed by ‘SOS’.

By this time the Emden had anchored in Port Refuge and had immediately dispatched its landing party. The orders to the landing party were to destroy the cable and wireless stations, but unbeknown to them a distress message had already been sent. Having received the SOS signal HMAS Sydney steamed towards Cocos Island.

As the German captain patiently awaited the return of his landing party, smoke was sighted on the horizon which was at first assumed to be the Buresk. Soon afterwards the masts of the approaching ship were recognised as those of a warship that was HMAS Sydney. By 07:00 HMAS Sydney was ‘doing twenty knots’ and at 09:15 had simultaneously sighted the island and the Emden some seven or eight miles distant.

The Emden immediately recalled its landing party, raised steam, and cleared the harbour to the north-north-west to try and improve its position with the intention of inflicting as much damage on HMAS Sydney as possible in the opening stages of the inevitable engagement. Emden opened fire at a range of 10,500 yards using the then very high elevation of thirty degrees. Her first salvo was ‘ranged along an extended line but every shot fell within two hundred yards of HMAS Sydney‘. The next salvo was on target and for the next ten minutes the Australian cruiser came under heavy, accurate fire. Fifteen hits were recorded but fortunately only five exploded. It was during the opening stage of the engagement that HMAS Sydney sustained her casualties. Two shells from a closely bunched salvo hit the after-control platform wounding all the personnel closed up there, while a direct hit on the upper bridge range finder took off the operator’s leg putting the equipment out of action.

HMAS Sydney’s first salvo went ‘far over the Emden’. The second fell short and the third scored two hits. Meanwhile, the German captain, aware that his only chance lay in putting HMAS Sydney out of action quickly, maintained a high rate of fire, reported to be a salvo every six seconds. It was to no avail. In spite of the damage to her range-finders HMAS Sydney used her superior speed and fire power and raked the German cruiser.

Despite the damage and the inexorable end, the Emden continued the engagement. Finally, with its engine room on fire and with a second funnel gone, the captain gave the order “to the island with every ounce you can get out of the engines”. Shortly after 11:00, Emden was seen to be fast on the North Keeling Island Reef.

When the captain of the HMAS Sydney saw that its opponent was aground and incapable of movement, she left to pursue the Buresk, which during the action had hovered in the vicinity to the north. Overtaking the vessel shortly after noon, a shot was fired across her bows to stop her and sent an armed boarding party across to secure her as a prize. Her German crew, however, had opened and then damaged the sea cocks to prevent her capture and she was already sinking. The boarding party and German crew were consequently recovered, and four shots were fired into Buresk by HMAS Sydney to speed her on her way to the bottom.

The attention now returned to the Emden which was reached at approximately 16:00. On nearing her it was observed that she was still flying the German ensign at the mainmast. A signal was made to her by flag hoist “Do you surrender”. The Emden made back by Morse flags “no signal books, what signal”. HMAS Sydney responded, using Morse flags, with “Do you surrender” followed shortly afterwards by “Will you surrender”.

No reply was received from Emden and the order was given to “open fire, aim for the foot of the mainmast”. Several salvoes were fired when a man was seen to be climbing aloft in Emden. HMAS Sydney’s captain ordered his gun crews to ‘cease fire’ and the German ensign was subsequently seen to be hauled down and a white flag waved as a token of surrender. The Imperial ensign was subsequently destroyed by the Germans as soon as it was hauled down. Prisoners where then taken on board the Australian ship and she left Cocos Island with a major victory under her belt.

HMAS Sydney, then headed for Colombo, rendezvousing with the auxiliary cruiser Empress of Russia on 12 November 1914 and all prisoners who could be moved were transferred to her. On 15 November 1914 HMAS Sydney arrived in Colombo from where she later proceeded to Malta arriving on 3 December.

Fresh from her victory HMAS Sydney re-joined the troop convoy in Colombo then spent eighteen uneventfully months patrolling along the west coast of the Americas before sailing to England where she took her place patrolling the North Sea again engaging the enemy on occasions.

On 4 May 1917, while on patrol from the Humber estuary to the mouth of the Firth, HMAS Sydney fought a running engagement with the German Zeppelin (airship) L43 until Sydney had expended all the anti-aircraft ammunition and the L43 all her bombs – ‘the combatants parted on good terms’. Several small bomb splinters landed on Sydney’s upper deck.

Later, in August 1917 HMAS Sydney commenced a three-month refit at Chatham, during which the tripod mast now situated as a memorial at Bradleys Head, Sydney, NSW was fitted to her. Of more significance however, she was fitted with the first revolving aircraft launching platform to be installed in a warship.

In mid-1918 Able Seaman Rayner, having experienced plenty of action, transferred ships spending time on HMAS Gayundah which had been recommissioned during the early part of World War 1 and spent most of the war period patrolling the coast along the eastern seaboard of Australia. With the threat from German merchant raiders increasing after 1917, HMAS Gayundah first assumed patrol duties off Port Jackson and later in the Spencer Gulf. Able Seaman Rayner also spent time on HMAS Encounter which was also being used to patrol the northeast seaboard of Australia.

When Able Seaman Rayner joined Encounter, the Naval Board had just despatched the cruiser to the islands of Fiji and Samoa on what became Australia’s first overseas humanitarian assistance operation. Encounter carried medical stores and a joint Army and Navy relief expedition, providing valuable aid following a severe outbreak of influenza among the indigenous populations. Ernest Rayner’s period of seven years of naval service ended in December 1919 a year after peace was declared. He returned to Altona where he resumed working at the coal mines until these closed. 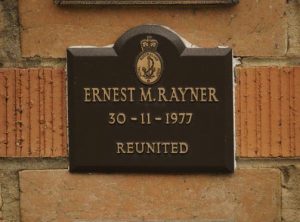 By 1921, Ernest was living in the suburb of Newmarket and working as a linesman for the State Electricity Commission. On 14 March 1922 he married Janet (Daisy) Groves at the Presbyterian Church in Footscray. Janet was the only daughter of William and Ruth Groves. Ernest continued working as an electrical linesman and the young couple quickly moved to Wright Street in Essendon where their three children, Moss, Grace Violet and Hazel Ruth, were born. Janet Rayner passed away in February 1959 and is interred with the Fawkner Memorial Park. After retiring, Ernest Moss Rayner moved to Glenroy in the early 1970’s, but passed away on 30 November 1977, aged 82. He is interred close to his wife within the Fawkner Memorial Park.