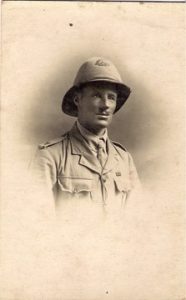 Herbert Leslie Newland was born on 22 July 1890 when the family were living in Camperdown in the south-west of Victoria. He was the seventh child born to parents William Anthony Newland and Louisa Jane Newland (nee Wall). The Newland family were early residents and pioneers of Laverton arriving in the new town around 1895. William Anthony Newland was employed on the railways as a ganger. Apart from this, the family purchased several blocks of land setting up a small farm as well as a store from which they sold some of their produce.

The family’s contribution to this small community included the establishment of the Laverton Tennis, Cricket and Football clubs, local sub-committee of the Red Cross Society, the Laverton Progress Association and the Werribee/Laverton Farmer’s Co-operative.

When the family moved to Laverton Herbert was still of school age and attended the Laverton State school. After leaving school, Herbert joined the Victoria Police and was one of 138 Victorian police officers who enlisted and served in World War 1.

He enlisted on 1 September 1914 at the age of 24, shortly after his two older brothers (James and William) had enlisted. Similar his two older brothers Herbert also had prior military experience having served three years with the Royal Australian Artillery. The Royal Australian Artillery was formed just after federation descending from individual colonial artillery units and it operated battalions in each of the Australian states.

Herbert completed his basic training at Broadmeadows and was appointed to the rank of bombardier assigned to the 2nd Field Artillery Brigade. The brigade embarked from Melbourne on 24 September 1914 aboard HMAT Southern A27 heading first to Egypt before he headed to Gallipoli. Bombardier Newland and the 2nd Field Artillery saw heavy action at Gallipoli in 1915 and his service and leadership were such that Herbert was promoted to corporal, in the field, at Gallipoli.

Herbert was hospitalised at Gallipoli, on 21 August 1915, and evacuated to New End Section Hospital, Heath Street, Hampstead, London on 10 September 1915 suffering with tonsillitis. He was able to return to duty on 9 February 1916, and arrived back in Cairo, Egypt on 14 February 1916.  At Tell El Kebir[1] he was appointed to the rank of acting sergeant on 8 March 1916 and joined the 23rd Battery. By the end of March, the now Sergeant Newland had embarked to France to join the fighting there and shortly after landing at Marseilles was transferred to the 21st Field Artillery Brigade (May 1916) as the brigade moved up to the front line near Fromelles (Fleurbaix) France.

On the 30 March 1917 Lieutenant Newland transferred to the 1st Medium Trench Mortar Brigade. The brigade was called into the second battle at Bullecourt where the first attempt to drive the enemy back had failed and the German forces had then pushed the allies back. The battle here raged for all of May and June 1917.

Herbert Newland was allowed to take leave in July but fell ill and was forced to spend July and August at the 39th General Hospital in Havre France before he returned to the 1st Medium Trench Mortar Brigade towards at the end of August. He had previously served with V1A Battery but had now moved across to X1A Battery.

The Mediums and Heavies were formed into batteries of four (heavy) and six (medium) mortars attached to each division. They were initially designated ‘V, X, Y, Z/n’ where ‘n’ was the division number. In February 1918 Herbert was posted to 1st Australian Corps Heavy Trench Mortar Battery. In March/April 1918 the 1st Division was rushed back to the front at Flanders as the German ‘Spring Offensive’ was having a grave impact of the British forces at Somme.

It was at this time that the Heavy Trench Mortar Battery and Lieutenant Newland found themselves in the thick of battle on the front line at Lys (April 9 to 13). At about 5.30 the enemy attacked. It was again foggy, and the line in front of Messines was quickly overpowered; the belts of wire and concrete strong points, built with so much thought and labour during the previous winter, were overrun in a few hours. At one point the Australian Corps Heavy Trench Mortar Battery were busily firing when it found itself suddenly fired on by Germans about fifty yards away behind its right flank.

Under Lieutenant Bond and Lieutenant Newland, their men took three Lewis guns from the retiring infantry and settled down astride the Neuve Englise road. Here Bond rallied a number of stragglers, and with them occupying trenches on both sides of the road, formed a definite obstacle to the enemy’s advance. Further north, astride of the Ypres-Comine canal, was the 9th Division. It held up the flank of the German attack, its commander wrote that it owed much to “the admirable defences” constructed by the Australians. Whilst the battery took the Messines town and hill, it could not hold on and the position was shortly afterwards abandoned

Across the front the German offensive persisted into May, but it had run out of momentum as they over-reached their supply chain and Allied resistance stiffened. The German initiative had been lost. Towards the end of the war, in Somme, during the August the Corps Heavy Trench Mortar Battery amused itself by not only using their own howitzers and heavy motors but Lieutenant Newland utilised an abandoned intact German machine gun to fire on the enemy. The Battery was in the area from early August until 5 September.

The war came to an end for Lieutenant Herbert Newland in October 1918 when he embarked at Havre France aboard HT Durham D31, having been granted ‘Special Leave 1914[2]’ and disembarked in Melbourne on 23 December 1918. He was discharged from service on 2 April 1919.

On his return Herbert Newland returned to his old position with the Victorian Police Force and was appointed to the rank of sergeant of both Queenscliff and Geelong police stations. Herbert Newland married Catherine Milne Scott in 1920 and they moved to 265 Mitchell Street, Brunswick and his younger brother Redvers was also living with them, and his occupation was also a police constable.

The Newland family tells of Bert, as he was better known, that relates to his method of not having to complete police paperwork for some of his arrests. The story goes that he would apprehend local drunks in the Geelong area and put them aboard the steamers bound for Melbourne making them also cover the cost of their passage there and he would then return to the station job done and no paperwork to complete. 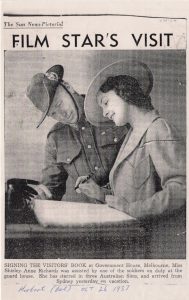 As well as working in Geelong with the Victorian Police Force, Bert also worked around the Brunswick, Albert Park and Kooyong areas before he finally moved with his family to the suburb of St Kilda.

Having moved there, Herbert Newland took up a position as sergeant of the first Shrine Guard at the new Melbourne Shrine of Remembrance and fought to wear the light horse uniform, whilst on duty, instead of the required police uniform. 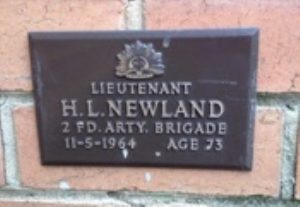 [2] Special Leave 1914 was granted to those men who had enlisted in 1914 and had already served four years overseas. This leave allowed these men to return back to Australia.