Gilbert Leslie Eaton was born on 11 February 1890 in Laverton to parents John Eaton and Margaret Anne Eaton (nee Jackson). Gilbert was the third of eight children, born to the couple, of which the first six were boys.

John Eaton was working with the railways and had followed work to Laverton, in 1888, where he was employed laying new track in the surrounding area. Given the age of their children, we believe that only their eldest child, William Laughlan, attended the local school in Laverton. Towards the end of 1892 the family moved back to the Broadford area where John returned to work on the railways within the local area.

Gilbert Leslie Eaton enlisted on 11 February 1915, which coincidently was the day he celebrated his 25th birthday. Gilbert Eaton doesn’t appear on Laverton’s honour board even though he was born in the district. This could have simply been a case of no one in the district knew that he had enlisted and he possible didn’t serve with anyone from Laverton therefore his name was never included. But his deeds need to be recorded as a son and enlistee from Laverton.

Prior to enlisting, Gilbert Eaton had joined Victoria Railways, like his father, and was initially working around the Spencer Street and North Melbourne rail yards a short distance from where he was living. He enlisted at Melbourne and shortly after moved to the Broadmeadows training camp and assigned the rank of private. Gilbert was not the only family member to enlist. His younger brother Desmond Russell Eaton enlisted five months after Gilbert, on 5 July 1915, but does not appear to have been pasted his medical.

At Broadmeadows, Gilbert Eaton was assigned to the 21st Battalion ‘A’ Company and he and the company embarked from Melbourne on 10 May 1915 aboard HMAT Ulysses A38. By chance, on the same ship that day were the members of the 22nd Battalion that included Ernest Peacock, William Cameron and Alfred Newland, all from Laverton. Not that they would have known Gilbert Eaton, given he left Laverton at such an early age.

Private Gilbert Eaton and the 21st disembarked in Egypt in June 1915 where they acclimatised and completed further training before being dispatched as reinforcements to Gallipoli in late August aboard the troopship HMT Southland. At about 9.45 on the morning of the 2nd of September 1915, three days into their voyage, the HMAT Southland encountered the German submarine UB14 which torpedoed the ship, and the extent of the damage required all soldiers and crew to abandon ship. Some 40 Australians were killed or drowned in the initial attack, yet the rescue mission that followed was an overwhelming success.

Over 1,450 men were saved, most on rescue ships that had sped to the scene. HMT Southland limped into Mudros harbour in Lemnos and was later repaired and returned to service. The 21st Battalion finally landed at Anzac Cove on 7 September, too late to take part in the final stages of the failed August Offensive. Private Eaton’s 21st Battalion had a had a relatively quiet time at Gallipoli, and similar to the rest of the troops there the greatest cause of casualties was enteric fever (typhoid) and dysentery.

During his stay at Gallipoli, Private Eaton did however injur his knee and was evacuated to hospital for treatment spending about four weeks recovering. He rejoined his unit on 12 October 1915 while they were still at Gallipoli undertaking mainly defensive duties until December 1915. They were evacuated after the decision was made to withdraw all personnel from the peninsula. Only one 21st Battalion soldier was killed during the Gallipoli campaign Private James Martin who was only 14 years and nine months old and is believed to have been the youngest Australian soldier killed during the war.

Returning to Egypt, Private Eaton’s battalion undertook defensive duties, along the Suez Canal Zone, as well as completing further training. During this time the Australian forces completed a period of reorganisation while its future employment on operations was being decided. Several units from the 1st Division were split up and used to provide unit staff for newly formed battalions however the 21st Battalion remained intact.

In early 1916 the decision was made to transfer part of the Australian force to Europe to take part in the fighting and in March 1916 the 21st Battalion, including Private Eaton, arrived in France, the first Australian battalion to commence active operations on the Western Front.

In July 1916 during the Battle of Pozières the battalion was mainly used to carry out ‘portage’ tasks. While this might have been the case there was still danger in carrying out these duties and Private Eaton was wounded suffering mild shell shock and spending a short period in the hospital.

Private Eaton rejoined his battalion on 28 August just as they undertook fighting around Mouquet Farm, France where the 21st Battalion suffered its most significant casualties of the war. The farm was near the high ground of Pozieres ridge. Three Australian Divisions made nine attacks on the German forces there between 8 August and 3 September 1916. Most of the farm buildings were reduced to rubble. Stone cellars, below ground, where used by the Germans as defensive bunkers. The Battle of Mouquet Farm cost three Australian divisions over 11,000 casualties. None of the Australian attacks succeeded in capturing or holding the farm.

It was during this time, in the field of battle, that Gilbert Eaton was promoted to the rank of lance-corporal. Throughout 1917 his battalion took part in two major battles after the German forces shortened their lines and withdrew towards the prepared defenses of the Hindenburg Line.

Gilbert Eaton remained with the 6th Infantry Training Battalion until he again fell ill with diphtheria, around mid-June 1918, and he spent a short period in hospital before being attached to the 2nd Machine Gun Company where he remained until peace was declared on 11 November 1918. He left England on 9 March 1919 and returned to Australia aboard HMAT Kashmir arriving in Melbourne 30 April 1919.

Following his discharge from the army, Gilbert Eaton returned to life in West Melbourne and his job working for Victorian Railways. In 1923 he married Margaret May Cruickshank and the couple moved to Speight Street Newport where they continued to live for many years and where they raised their two children, Margaret Jean and Alexander Leslie. 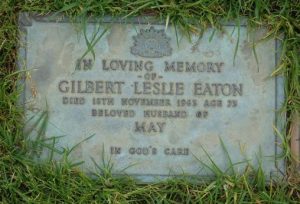 Gilbert Leslie Eaton continued working for the Victorian Railways until his retirement in the late 1950’s but remained living in the Newport area. Gilbert Leslie Eaton passed away on 18 November 1963 aged 73 and is interred within the Altona Memorial Park. Margaret sold their family home in Newport and moved to live with their son, Alexander Leslie Eaton, initially Sunbury and then in Keilor. Margaret May Eaton passed away on 8 July 1978 and is buried alongside her husband within Altona Memorial Park.