Robert James Cason was born on 26 October 1882, in the area around Mount Bischoff in the north-west region of Tasmania. Mount Bischoff was a tin mine where his father was employed as a miner. Robert was the second eldest of nine children born to Samuel Carson and Annie Carson (nee Curren). The first four children were born in Tasmania before the family moved back to Victoria, where Samuel pursued work in various mining towns.

Robert was working as a guard at the Government explosive reserve in Laverton. He had previously worked as a miner, and had experience with handling explosives, which may have influenced his move from Geelong West to the Laverton area and the explosive reserve. Robert then enlisted into the Australian Imperial Force (AIF) on 17 February 1915 in Melbourne, being the first of four brothers who enlisted into the AIF during 1915.

His younger brothers William enlisted 11 June, Charles on 29 September, and Joseph (Eli) on 20 November. Of the four brothers, William had embarked to Egypt but shortly after arriving, he was admitted to hospital and then returned to Melbourne around mid-March 1916. Two weeks later, he died from injuries suffered in a train accident near Flinders Street station. Joseph was killed in action in the vicinity of Villers-Bretonneux on 28 April 1918. Both Charles and Robert returned to Melbourne in 1919.

At the time of enlisting, Robert was just over 32 years old and still single. He undertook his initial training at the Broadmeadows camp where he was appointed as a Private to the 22nd Battalion. In April 1915, just prior to the 22nd Battalion finishing training and shipping out of Australia, they were given leave. Robert caught up with two of his brothers, Charles and Joseph. The boys must have had one too many drinks as they were all arrested on an assault charge. The charges against Robert were dropped and he returned to camp, whilst his two brothers received fines for their part in the disturbance.

On 8 May 1915, onboard the HMAT Ulysses A38, Private Robert James Cason embarked at Melbourne with “D” Company of the 22nd Battalion and sailed to Egypt. As a result of heavy losses in Gallipoli, Australian forces were reorganised and on 7 August, Private Cason was transferred from the 22nd Battalion to the 5th Field Coy, Australian Engineers. On 4 September, Private Cason embarked at Alexandria with the 5th Field Coy and proceeded to join the Mediterranean Expeditionary Force[1] at Gallipoli. They sailed to the port of Mudros, on the island of Lemnos, aboard the HMT Knight Templar and arrived on 7 September, remaining there for five days. Finally, on 12 September, they embarked aboard the HMT Osmanieh, and arrived at Gallipoli the following day.  It took two days to unload their equipment and set up their various camps at Anzac Cove.

While their ship was unloading, Private Cason went absent and was subsequently charged with “Breaking Ship (HMT Manitou) and absent without leave for 4 hours.” His charge was heard after they arrived at the Tel-el-Kebir Camp in the Egyptian desert on 20 January 1916, and he was awarded 14 days in detention.

On 10 January 1916, the 5th Field Coy was renumbered as the 8th Field Coy, Australian Engineers, as another company of the same name had recently arrived from Australia. All of February and March 1916 was spent on training to build bridges and in providing improvements to camp facilities at Tel-el-Kebir. During a further reorganisation of Australian Divisions in March 1916, the 8th Field Coy was allotted to the 5th Australian Division and was again renamed, now becoming the 5th Pioneer Battalion.

Pioneer Battalions were essentially infantry with light military combat engineer skills, and they were located at the very forward edge of the battle area. They were used to develop and enhance protection and mobility for supported troops, and to deny it to the enemy.  They constructed defensive positions, command posts, dugouts, and prepared barbed wire defenses.

After time spent training, the 5th Pioneer Battalion repaired four miles of desert railway, which was part of the main Suez Canal defenses.  Mid-day temperatures were 48 degrees Celsius (or 119 degrees Fahrenheit) in the shade, and only making conditions tougher, they also had to cope with strong winds and dust, meaning they could only work during early mornings or late afternoons.  In June 1916, the battalion was transported to Alexandria where they boarded the transport vessel HMS Canada, bound for Marseilles, France.

After disembarking at Marseilles on 25 June 1916, the 5th Pioneer Battalion were transported by train north to Hazebrouck. From there, they marched to Bae St Maur which was three miles from the front. One of the first jobs for the Battalion was to build a mile of railway to the front, over three consecutive nights. Despite having to cross many streams, and being subject to heavy enemy attack, they were able to successfully complete the task.

This railway line was used as part of an attack on 19 July 1916, and for a fortnight after. In the battle, A and B Company took part in the main attack. C Company maintained a supply of water to the attacking Infantry, and D Company completed a trench across No Man’s Land, in the centre of the sector. During this action, Robert Cason was sent to hospital with cuts to his toes.  He was treated by the 14th Field Ambulance and was able to return to his unit on 16 August 1916.

Later, the Battalion took part in the pursuit of German forces as they withdrew towards the Hindenburg Line in early 1917, working to extend the 5th Division’s supply railway from Ginchy to Beaulencourt in March. In May 1917, Robert Carson was promoted to the rank of Lance Corporal, and then on 18 September 1917, he was promoted again to Corporal. In mid-October 1917, the Battalion relocated south where they took part in the Great Battle of the Somme. Their first base was at Montauban, where they had to maintain two long communication trenches named Turk Lane and Fish Alley. These trenches were each over two miles long and were the only means of access to the front. However, when it rained the trenches became unusable, so tracks along the tops of the trenches were used, and sleds were manufactured to drag loads through the mud. In January 1918, the weather was so cold that the ground had frozen solid to a depth of about one foot.  This allowed equipment to be moved relatively easily until it thawed out.

In early March 1918, the Divisional sector was extended. Many enemy trenches were captured along the front, and this required that the Australian communication trenches be extended. Half of the Battalion worked on extending the trenches and the remainder extended the narrow-gauge railway forward to Beaulencourt. On 20 April 1918, the Division, including the Pioneers, were relieved from their work in the Somme, and relocated to Fricourt. Here they undertook training and participated in various sports for recreation, and they also prepared a ground for a Divisional Horse Show near Albert.

After four months with the Pioneer Training Battalion, it was now time to return to France. On 1 September 1918, Corporal Cason sailed from the port of Folkstone, and marched into the Australian Infantry Base Depot at Havre in France two days later.  While at the Havre base he was charged with committing two serious crimes. The first was being drunk while on Active Service, and the second was being absent without leave for 45 minutes on the evening of 5 September 1918.  After his charges were heard, his Commanding Officer issued him a severe reprimand. With this trouble now behind him, on 19 September 1918, he re-joined his old unit, the 5th Pioneer Batallion, now stationed at Flamincourt in a period of rest and training. 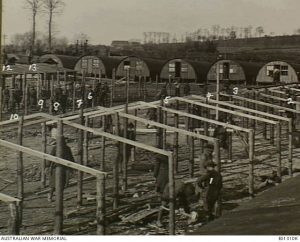 On 27 September 1918, they moved to Templeux, to prepare for a big operation. It was an attack on the Hindenburg Line which commenced on 29 September. The job for the Battalion was to follow the American Infantry and drive forward two roads capable of taking horse transport. The attack began at 6 am, in a thick mist, and sometimes the Battalion was ahead of the American Infantry. Both roads were completed to Bellicourt, as required, but the Battalion suffered heavy casualties (mostly wounding). After this action, eight men of the battalion were awarded Military Medals. The 5th Pioneer Battalion remained in the area, ‘mopping-up’[3] until 3 October 1918, when they were relieved by the 4th Pioneers.

News of the Armistice was received at Cerisy-Buleux, Somme, at around 10.30 am on 11 November 1918. All training was suspended for the day, and the Commanding Officer held a meeting with his officers. He thanked them for their loyal support during the war. On 24 November 1918, orders were received for the Battalion to move to the Rhine region. This was done by trains which were continually being delayed. The Battalion arrived at Pont-Remy on 29 November, before ending up in Hestrud.

Corporal Cason was able to march-out from the Battalion on 28 December 1918 and begin his return to Australia. He left Havre, France, for England on 3 January 1919 and went to the Hurdcott Camp on the Salisbury Plains. Corporal Cason then embarked per the HMS Kashmir on 9 March 1919 and sailed home to Melbourne, where he disembarked on 30 April 1919. He was discharged by the 3rd Military District on 29 June 1919.

By 1919, the Cason family had relocated from Geelong West to 132 Mary Street, Richmond. Living there were four of the brothers, Albert Cason, Charles Cason, Robert James Cason, and Samuel Cason[4]. Robert married Katherine (Kitty) Isbel in Victoria in 1921 and they took up residence at 13 Argyle Square, Carlton South. Following the move, Robert began working as a labourer. He and Katherine also had one child; a daughter named Dorothy.  Robert James Cason died in Carlton on 10 March 1929, aged 46 years old, and he was interred within the Box Hill Cemetery. Katherine passed away on 3 October 1937 and was buried next to her husband.

[1] The Mediterranean Expeditionary Force (MEF) was part of the British Army during World War I, which commanded all Allied forces at Gallipoli, and later Salonika.

[2] A Cadre means an officer in charge of training their unit of soldiers.

[3] ‘Mopping Up’ was a military term used to describe the tasks undertaken after a battle or operation.