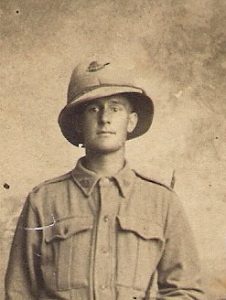 Ernest William Peacock was born in Footscray in 1896, the second eldest of five children born to parents William and Lottie Peacock (nee Tampling). The Peacock family moved from Footscray to the more rural setting of Laverton around 1912-1913 and family quickly settled into their new community. Ernest William had completed his schooling whilst living in Footscray and was now working as a cycle mechanic and had quickly established a strong friendship with locals Alfred Lindsay Newland and William Duncan Cameron who were also keen cyclists and sportsman.

Just three months after his 19th birthday, Ernest, along with his two mates Alfred Newland and William Cameron, enlisted into the Australian Imperial Force on 19 February 1915. Edward had completed two years as a senior cadet with the 66th Battalion in Footscray and had just commenced with the Citizens Force prior to moving from Footscray to Laverton.

Ernest was assigned to the 22nd Battalion ‘C’ Company at the rank of private. The 22nd Battalion was formed on 26 March 1915 at Broadmeadows and joining him, in the battalion, was Alfred Newland and William Cameron. Ernest and the 22nd Battalion embarked from Melbourne on 10 May 1915 aboard HMAT A38 Ulysses bound for Egypt. In Egypt the men of the 22nd undertook further training and were allowed time to acclimatise to the hot desert conditions. In September 1915 the 22nd Battalion was despatched to the Gallipoli peninsula as reinforcements and as such saw their first action relieving elements of the 2nd Brigade and holding positions north of Anzac Cove allowing the 2nd Brigade to be withdrawn for rest and regrouping.

The men of the 22nd Battalion remained at Gallipoli until the final evacuation took place in December 1915 primarily undertaking defensive duties. After their withdrawl, they sailed back to Egypt where the battalion was strengthened by reinforcements from Australia. At this stage the entire Australian Imperial Force’s infantry divisions were reorganised and expanded before being sent to France to take part in the fighting on the Western front.

In March 1916 Private Peacock was appointed a driver to the newly formed 6th Machine Gun Company (6 MGC) and was transferred to France with his new unit in May of 1916. Within the 6 MGC, Driver Ernest Peacock joined fellow Laverton enlistee 2nd Lieutenant Alfred Newland who had also become an inaugural member of this machine gun company. The 6 MGC formed part of the Australian Imperial Force’s 2nd Division and moved to France taking over part of the sector around Armentieres, France. Initially they engaged the German forces around the area Fleurbaix with night firing on communication points behind the German lines with the objective of disrupting the enemy’s advance.

They left the front towards the end of May and moved back to billets at Erquinghem-Lys in Northern France where they undertook further training rather than be allowed to relax. In June 1916 Ernest Peacock and the company were used as relief for the 7th Machine Gun Company fighting at Bois Grenier, France which required them spending 24 days on the front line.

On 27 July 1916 the 6 MGC relieved the 1st Division at Pozières and after heavy fighting they were able to capture the heights but at a great cost. Two more tours of the Somme followed in August and November 1916 for Ernest and the 6 MGC. During this time the 6th, 3rd and 4th Machine Gun Companies were being used in rotation within battles around the Somme and Pozières, with short rest/training periods at billets in Albert France.

The end of August and the beginning of September saw the 6 MGC and Driver Ernest Peacock move up to the new front-line, once again, at Ypres Salient Belgium where by 5 September 1916 they had spent 44 days on the front-line until they were finally relieved on 19 October 1916. As the front-line moved forward the 6 MGC followed and by 4 November 1916, they were back at the front, this time in Flers where they spent another 17 days in the thick og=f the action.

Following a short break, they were again within the action this time in Le Transloy, commencing 22 December 1916, with the action continuing over Christmas until they were relieved on 17 January 1917. Within three weeks they were back amid the fighting in the areas of Le Sars and Eaucourt, Northern France until the end of February 1918.

Driver Peacock and the 6 MGC spent March regrouping and training before they moved up to the Front Line in the Battle at Bullecourt which occupied April and May before they were again relieved and returned to Millencourt and then onto Warloy-Baillon for training and some respite. The men of the 6 MGC did not see action again until they were called up to the front in late October at Ypres and then followed Warneton over the January, February and March months of 1918. Shortly after they were moved back to Albert, France where they were used to support troops involved in the conflict within this area. This was followed by action at Ville-sur-Ancre in May 1918, Villers-Bretonneux June and July and then the 6 MGC moved on to Mont St Quentin in late August of 1918.

September saw the 6 MGC earn a break and undertake further exercises before moving to a new location. On 4 October 1918 the company and Driver Ernest Peacock undertook their final action at Montbrehain. They were relieved from duties by early November and were taking a well-earned rest when the fighting and the war stopped, and peace was declared.

They spent the time from November to early February undertaking clean-up action in the Belgium area. It was around this time that the members of the 6 MGC then joined the 2 MGC as they worked their way back to the coast of Northern France and by January 1919, they embarked for the short voyage back to England, the first step in their repatriation.

Ernest William Peacock returned to Australia on the HMAT Mahia which embarked England on 4 June, and he arrived in Melbourne on 17 July 1919. He was discharged from service on 15 September of 1919. Ernest Peacock attended a function organised by the Werribee Shire at the Laverton state school where he was presented with an inscribed gold medal by John Henry Lister MHR. 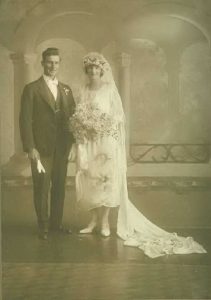 Following his return, Ernest initially resided in Laverton before moving to the Footscray North/Kingsville area where he worked as a general carrier. In the early months of 1924, Ernest married Jessie Cecilia Lynch, the daughter of Martin Stirling and Charlotte Ann Lynch of Sunshine.

There is no indication that he went back to his previous occupation of cycle mechanic, as the electoral roll shows Ernest as being employed as a carrier which he undertook until he retired. The couple remained in Footscray North/Kingsville where they raised their son Norman Ernest William Peacock. 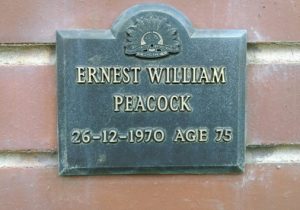