George Duke was born on 13 September 1890, in Brunswick, to parents James Francis Duke and Mary Margaret Duke (nee Bell) and was the second eldest of 11 children. James and Mary Duke were not living within the Altona area, when George enlisted, but prior to his return the family had not only purchased land, were starting to build their home but were part of the growing force behind the progress of the township of Altona.

Just two months before his 25th birthday, George enlisted into the Army on 12 July 1915 and was assigned to 12th Battalion whilst he completed his training at the Broadmeadows camp. The electoral roll of 1912 notes George Duke as living in Brunswick and being employed as a storeman. The 1914 electoral roll showed George as now living in Coburg and employed as a driver.

Private George Duke embarked from Melbourne on 8 February 1916 on board HMAT Warilda A69 assigned to the 22nd Battalion. The 22nd Battalion had been formed on 26 March 1915 at Broadmeadows camp in Victoria and was part of the 6th Brigade of the 2nd Division.

The 22nd Battalion reinforcements had no sooner reached England than they quickly regrouped and transported across the English Channel to France in late March 1916. The reinforcements were quickly transported to join the 22nd Battalion on the front line around the area of Fleurbaix in April. It was during this time the Private George Duke wrote the following letter back to his parents.

The following article appeared in the Brunswick and Coburg Leader 1916:

Mr James Duke, of 90 Grantham St., Brunswick, has received the following letter from his son, George, who is now at the front:

Dear Mum, -Just a few lines to let you know that we are in France (but I cannot, tell you where). We had a good trip across. I shall never forget it; the sights are beautiful. We had a very long train ride when we got off the boat (you could not go the same distance in Australia). The sights we saw along the line were one mass of beauty; no wonder the French love their country! On all the main stations along the line there are women working at all branches of work; they even go as far as cleaning engines. We also saw women ploughing, etc. in the fields. We were splendidly received along the line, especially by the girls. who bestowed gifts upon us and threw kisses to us till out of sight. The first salute we got (when we got to the lines) from the Tommies was, come and see the bushmen. The most of them are of the opinion that Australia is all bush. There is a little town near our camp. but we will not trouble it much as we can buy all we want in camp. We have the pleasure of saying that we were one of the first. Australian units to land in France. We now get our tobacco and cigarettes issued to us, but I smoke more and it costs me a bob or two extra. It is very cold here now, but we have plenty of blankets. and we need all our warm clothes. It is just, coming spring, so it won’t be so cold in a week or two. We had gifts from Australia issued today, and they were very acceptable; they were chocolates, tobacco and cigarettes. I forgot to tell you we passed through a tunnel which took us 20 minutes. I have not. received any letters from you yet, but we have had such a lot of moving about that it has made it very bad for us as far as the mail is concerned. Well. dear mum, ere this reaches you, I will be well in the fighting. All the boys are eager to have a go at the Germans. There is likely to be some heavy fighting. This is all, dear mum. hoping all are well. ‘Scotty’ and I are in the pink of condition. 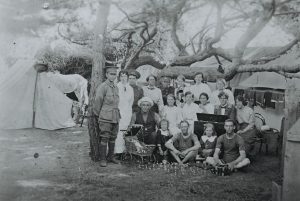 The 22nd Battalion saw action again a few months later during the Battle of Pozières which was part of the wider Battle of the Somme. The battle proved a very costly for the 22nd Battalion with their losses between 25 July and 7 August 1916 totalling 27 officers and 656 other ranks killed or wounded.

It was during this period of action that Private George Duke suffered a gunshot wound to his abdomen that forced him to be treated at the field ambulance before being evacuate back to England for further treatment for his wounds at the 1st Eastern General Hospital in Cambridge. He was hospitalised until October 1916 and was then assigned to the 6th Training Battalion in Weymouth before being transported back to France on 4 February 1917.

Private Duke rejoined his 22nd Battalion, who were still fighting on the front in Flanders, Belgium. The battalion would find themselves spending most of 1917 bogged in horrific trench warfare from Bullecourt to Broodseinde. It was on the 4 October 1917, during the battle at Broodseinde, near Ypres, that Private George Duke again suffered a gunshot wound to the head which required him to be evacuated, initially, to the field hospital and then to the 1st Australian General Hospital in Harefield, near London, for more specialist care. He remained in hospital through November and December. Following this second serious injury Private George Duke was considered unfit for further active duty and embarked on the HT Corinthic on 10 January 1918 and disembarked in Melbourne on the 3 March 1918 and was discharged from service in April 1918.

By 1918 the Duke family were now living in Mount Street Altona and had commenced building their home. In fact, their property was a large block of land on the corner of Mount and Blyth Streets (now sub-divided into 5 or 6 house blocks). As an early pioneer of the area George’s father, James, played a significant role in the formation of Altona and was involved in the various sporting bodies including the local cricket, hockey, and football clubs. It was at the time of George’s return that James Duke and others of the Altona Football club were looking to choose the colours of the club. It is told that they were selected to be purple and gold as these appear to have been George’s battalion colours.

Following his return to civilian life George went back to his previous occupation as a storeman initially in the Footscray area and then in the early 1920’s around Collingwood. By the 1930’s he had returned to live in Altona in Mount Street on the family property.

George Thomas Duke married Florence Alice Grover on 29 June 1935 at the Collingwood Baptist Church. Florence Grover was living with her parents on the corner of Bayview Street and the Esplanade, Altona at the time. The couple remained in Altona for some time, but it appears that they may not have any children.