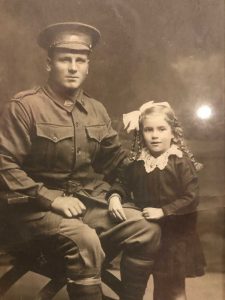 James Rayner was born in December 1881, at Williamstown, to one of Altona’s oldest families, Henry and Ellen Rayner (nee Cotterall). James was the fifth of ten children born to Henry and Ellen who had originally moved from Williamstown to the area around 1889. James had attended the Laverton State school, as had most of the Rayner children. Leaving school, James commenced work at the Melbourne and Altona Colliery Co. N.L. (Altona coal mines) that were located west of Harrington Square behind the site that is now occupied by Mount St Joseph’s Girls’ college.

In 1915 James married Annie Ellen (Nellie) Wilkinson (nee Spriggs) uniting two of Altona’s oldest families and original settlers. The Spriggs family had moved into the Altona area, around the same period as the Rayner’s, to assist in extending the railway west from the Altona Beach station to the coal mines that were located west of Altona. Annie had returned to the Altona area, after the breakdown of her marriage, and was residing with mother. Annie had had three children, but only one child, John William Wilkinson, appears to have lived beyond infancy. James and Annie had one son together, James Andrew Rayner, who was born around the time his father enlisted into the Australian Imperial Force on 12 February 1916, he was 34 years old.

James was sent to the Broadmeadows training camp and was assigned the rank of private within the 23rd Battalion. Following basic training, James, and members of the 12th Reinforcements 23rd Battalion, embarked from the port of Melbourne, aboard HMAT A14 Euripides, on 4 April 1916.

The 12th Reinforcements arrived in England, via Egypt, undertaking further training before joining the 23rd Battalion in France/Belgium in October 1916. There was no gentle introduction to the Western Front, for the reinforcements as the battalion was still involved in the horrific battles at Pozières and Mouquet Farm after which it was estimated that the battalion had lost almost 90 per cent of its original members.

Private Rayner suffered an injury to his ankle within a month of being on the front-line. He was sent for treatment at the closest field hospital before being diagnosed that he was suffering from trench foot. This was a common complaint experienced by many soldiers and wasn’t surprising given that they were living in trenches during the harsh European winter. Given the serious nature of his illness, he was transported to Havre and evacuated back to England for further treatment at the 3rd London General Hospital at Wandsworth.

By May 1917 Private Rayner had recovered and was able to re-join the 23rd Battalion who were now committed to the fighting at the second Battle of Bullecourt. Succeeding in capturing all its objectives it faced heavy counter attacks from German forces. The battalion suffered many casualties including 100 men killed or later dying of their wounds before the battalion could be relieved by the Australian 3rd Battalion.

Following this battle, the battalion was withdrawn from the front-line until early September 1917 when they moved into offensive positions around Ypres in Belgium and participated in the Battle of Broodseinde on 4 October. During this battle the 6th Brigade and the 23rd Battalion were positioned to the south of Zonnebeke Lake. The 23rd Battalion suffered heavy losses, once again, losing three officers and 101 other ranks killed or wounded. Some of these fatalities were inflicted when an intense German mortar barrage fell upon their ‘waiting line’ prior to the attack. Later in 1917 the battalion moved with the rest of the Australian Imperial Force back to the Ypres sector in Belgium and in October participated in the battle to resecure Broodseinde Ridge.

In April 1918 the 23rd helped to turn back the renewed German spring offensive and then took part in the battles that would mark the beginning of Germany’s defeat – Hamel, Amiens and Mont St Quentin. The battalion fought its last battle around the town of Beaurevoir between 3 and 4 October. James and his battalion then left the front for the very last time on the night of 5 October and were regrouping and resting when peace was declared on 11 November. The 23rd Battalion disbanded in Belgium on 30 April 1919.

James returned to Australia aboard HMAT Mahia arriving back in Melbourne on 14 June 1919 and was discharged on 31 August 1919. He returned to his wife, Annie, and their young family in Altona, initially moving into his parents’ property in Mount Street. James initially returned to work with the Melbourne and Altona Colliery Co. N.L. in the local coal mines. Following the closure of the mines he took up employment at the Government explosive reserve, in Altona. By the early 1930’s James and Annie had moved to a home in Rose Street Altona and James remained working at the Government explosive reserve. 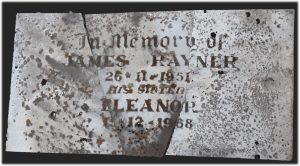 Around 1950, following his retirement from full time work, James and Annie moved to live at Melbourne Road in Newport and about a year later James passed away on 26 November 1951, aged 69. James Rayner is interred within the Williamstown cemetery near the grave of his parents. Annie Ellen Rayner remained living in Newport until she passed away on 13 September 1954 and is interred within the Williamstown cemetery alongside her parents, William and Ellen Spriggs.