Alexander Ronald Cameron was born on 25 December 1895, in the township of Clyde, about four miles south-east of Cranbourne, to Alexander John Cameron and Agnes Cameron (nee Spitty). Alexander, or Alex as he was known, was their third of eleven children, and one of their three sons who served during World War 1. The family were living in Kiora Street Laverton opposite the Laverton State School that Alexander and his siblings attended.

Shortly after his 21st birthday, Alexander Ronald Cameron took his oath of enlistment at Melbourne on 15 January 1916 and was sent to Ballarat to complete his basic training with the 39th Battalion. Alexander’s enlistment form indicates that he was not involved with a home defence militia or Commonwealth Military Force. There is an added note that appears to indicate that he was living within a ‘Militia Force exempt area’ which meant that he was exempted from undertaking citizen military training.

Private Alexander Cameron was appointed to ‘A’ Company of the 39th Battalion. This battalion had just been formed on 21 February 1916 at the Ballarat Showgrounds and drew most of its recruits from Victoria’s Western District. His basic training, with the 39th Battalion, involved 11 weeks of various drills and instruction prior to them sailing from Port Melbourne on 27 May aboard HMAT Ascanius A11.

Their ship first stopped at Cape Town, South Africa, before heading to St Vincent and then on to England arriving on 18 July 1916 with the battalion then commencing further training prior to heading across to France. On arrival the men were granted four days leave, however Private Cameron missed out on his leave break as he was admitted to the Military Hospital Fargo suffering with mild case of pleurisy.

In August 1916 a Trench Mortar Battery was formed within the 39th Battalion. Following his release from hospital on 15 October 1916, Private Cameron was transferred to the 3rd Australian Divisional Trench Mortar Batteries at Larkhill and appointed as a driver.

Because no mortars were available for training in England the batteries were ordered to proceed to France immediately, departing on 21 November 1916.  Four days later they arrived at their billets in Bailleul, near Flanders on the Western Front. During the first half of December 1916 the men from the Trench Mortar Batteries attended training at Berthen, France where they were instructed on the use their new weapons.  Following this training period, they then moved to Armentieres and took over this sector on the Western Front, south of the River Lys and extending down to place known as Row-Avenue.

On 22 April 1917 Driver Alexander Cameron was detached to the 3rd Divisional Ammunition Column. Each Division had their own ammunition column that was required to keep ammunition up to the guns at the front.  Shells were moved from the ‘Third Line’ up to the ‘Front Line’ via a network of motor vehicles, horse drawn wagons, railways or tramways. It was a very risky job and many drivers received bravery awards through the course of the war. There are no unit war diaries from the 3rd Divisional Ammunition Column currently available, so it is not possible to trace his movements until Alexander returned to the 3rd Divisional Medium Trench Mortar Battery on 11 June 1917 at Nieppe in Northern France.  It was at this time that he was promoted to the rank of gunner.

By the 7 July 1917, the 3rd Division Trench Mortar had relocated to ‘Wheal Camp’ which was in the vicinity of Neuve-Eglise Belgium where they occupied the Messines Sector in what was newly classified as ‘captured ground’.  As they were in new territory, all personnel were required to assist in the laying of new underground communications cables. Early September 1917 saw the 3rd Division Trench Mortar move further forward to newly established camp at Ouderdom, situated between Neuve-Englise and Ypres. This area was also newly captured ground and again required all personnel to help in establishing this as a stronghold.

At the end of September Gunner Alexander Cameron fell ill and was treated for Pleuro Pneumonia by the 3rd Field Ambulance. He was transferred to the 2nd Casualty Clearing Station and then transferred to the 7th Casualty Clearing Station at the Etaples Base. It was here that he was diagnosed as suspect Tuberculosis and transferred back to England aboard the hospital ship ‘Princess Elizabeth’. On 5 October 1917 he was admitted to the military hospital at Frensham Hill and there he was diagnosed as suffering from bronchitis. His treatment and convalescence took three weeks before he was discharged back to light duties, on 29 October 1917, with the No. 2 Commonwealth Depot at Weymouth.

On 15 November 1917, Gunner Alexander Cameron was transferred to the Australian No 4 Command Depot at Hurdcott. This was one of four camps in England, set up to help fully train soldiers back to fighting fitness. After a further period of convalescing, Gunner Cameron was then transferred to the Overseas Training Brigade at Longbridge Deverell on 21 January 1918.  During the cold English winter, he suffered a relapse and was admitted to the Group Clearing Hospital, suffering with influenza.  Following further treatment and rest he was discharged in early March 1918 and sailed from Southampton to re-join the 3rd Division Artillery in France.

By mid-March 1918 Gunner Alexander Cameron was assigned with the 6th Australian Medium Trench Mortar Battery at Nieppe in France.  His name appears in the Unit War Diary as being taken on strength on 14 March 1918. Between March and November 1918, his unit saw action at La Neuville, Ville Church, Sunken Road, Villers-Bretoneaux, Monument House, culminating at the Hindenburg Line and Montbrehain. Peace was declared on 11 November 1911 but all that was mentioned within his Unit’s War Diary was just a single line entry stating “Weather cloudy. Nothing to report”.

From this date the daily routine was very quiet with the men waiting to return to England and then home to Australia. The 6th Australian Medium Trench Mortar Battery was disbanded on 11 March 1919, and all personnel were transferred to the 3rd Divisional Ammunition Column.  Gunner Alexander Cameron arrived back in England on the 3 April 1919. After a wait of another month, he embarked aboard HMAT Borda A30 on 11 May 1919 and sailed for Australia arriving back in Melbourne on 27 June 1919 but was not discharged until November of that year.

Alexander Cameron, together with his two brothers, John and William, were welcomed home at a function held in the Laverton state school on 14 October 1919. They were part of a large group of returned soldiers who were presented with gold medals by Mr John Henry Lister, MHR.

Following the war, Alexander Cameron appears to have settled back into life within Laverton and continued to reside at the family home in Kiora Street, directly opposite the school where he and most of his family attended. Between 1919 and 1963 the Victorian electoral roll records Alexander Cameron as residing at Kiora Street in Laverton and even though he had been discharged from the army, his occupation was always listed as a soldier. Following the death of both his parents he remained at the Kiora address along with three of his siblings Archibald, Charles and Hilda. 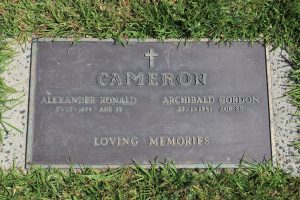 On 28 March 1962 Alexander applied for benefits under the Repatriation Act, which would have been about the time he retired and had moved down to Beach Road in Werribee South. There is no record of him as having been married or having a family. Alexander Ronald Cameron passed away at Werribee on 5 October 1978 at the age of 83 and is buried with Altona Memorial Park alongside his younger brother, Archibald Gordon Cameron.