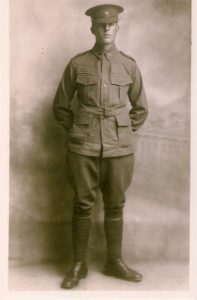 Alfred Lindsay Newland was born on 13 September 1894 at Pomborneit, about 111 miles west of Melbourne. He was the third youngest of the 11 children and the youngest of the four Newland brothers who enlisted into the army during World War 1. Alfred was born to parents, William Anthony Newland and Louisa Jane Newland (nee Wall). The Newland family were early residents and pioneers of Laverton arriving in the new town around 1895. William Anthony Newland was employed on the railways as a ganger. Apart from this, the family purchased several blocks of land setting up a small farm as well as a store from which they sold some of their produce.

The family’s contribution to this small community included the establishment of the Laverton Tennis, Cricket and Football clubs, local sub-committee of the Red Cross Society, the Laverton Progress Association and the Werribee/Laverton Farmer’s Co-operative.

Alfred Lindsay Newland was the last of the brothers to enlist but this was only three months after them, enlisting on 19 February 1915. He also had the distinction of being the tallest, being 6 feet ¼ inches, of all four brothers and in fact of all those who enlisted from the Laverton and Altona area.

Private Alfred Lindsay Newland was assigned to ‘C’ Company of the newly formed 22nd Battalion and undertook training at the Broadmeadows training camp. Alongside him, in ‘C’ Company, were his two mates from Laverton, William Duncan Cameron and Ernest William Peacock. They completed their training on 1 May 1915 and embarked from the port of Melbourne aboard the HMAT A38 Ulysses on 10 May 1915 bound for the port of Alexandria in the north of Egypt.

Following a short period there, completing further training, the 22nd Battalion were a component of the reinforcements that landed at Gallipoli on 5 September 1915 between 2.30am and 6.00am. The battalion had left Alexandria in the early hours of 31 August 1915 bound for Lemnos, an island near the northern part of Greece, and then onto the Dardanelles. On arrival the battalion marched just over two miles inland to the trenches near Lone Pine.

It must have been a sobering introduction for the young men of the 22nd Battalion, as their first taste of active saw them in trenches still littered with the bodies of the dead, from prior fighting. The battle for Gallipoli had raged since 25 April 1915 and the human cost on both sides had been substantial if not horrific. The 22nd Battalion performed defensive duties in positions north of Anzac Cove and stayed at their post until the final evacuation in December 1915.

Following their evacuation, the 22nd Battalion returned to Egypt to regather its strength before joining the British Expeditionary Force in France. In March 1916 and whilst still in Egypt Private Alfred Newland was sent to the School of Instruction – the first steps in the pathway for promotion and the road to an eventual commission as an officer. During March he was promoted to the rank of sergeant and was taken on strength as an inaugural member of the 6th Australian Machine Gun Company. This company formed part of the 2nd Australian Division. Joining him in this transfer, to the 6th Australian Machine Gun Company, was Private Ernest Peacock.

For the next three months Sergeant Newland and his colleagues were either undergoing intensive training or serving in the front line mostly in the Somme region in Fleurbaix and Bois Grenier. On 1 July 1916 they were a part of Somme offensive, joining the British troops. Here their combined forces suffered a staggering 58,000 casualties on the first day – around one third of whom were killed.

Towards the end of July 1916, the Australian troops were called into action at Pozières Ridge – described by Charles Bean, journalist and official Australian war diarist and historian, as “more densely sown with Australian sacrifice than any other place on earth”.

In the seven weeks of fighting at Pozières and Mouquet Farm, Australia’s three divisions suffered 23,000 casualties with over one third of these being either killed or having died from their wounds. Sergeant Newland’s former battalion the 22nd lost 27 officers and 656 ‘other ranks’ within this same battle.

The 6th Australian Machine Gun Company were then sent to Ypres, in Belgium, travelling much of September and October but by October 25 they were back in the Somme region where they undertook further training and preparation for their next action on the front-line. Before the company moved up to the line, Alfred Newland was promoted to the rank of second lieutenant (18 October 1916).

In November the company found itself at the front near Buire France at a place called Flers, which is located around 60 miles due west of Peronne the southernmost point of the Somme offensive. By November 1916 the Somme offensive had virtually ground to a halt along the entire front amidst the early onset of the bitter 1916/1917 European winter. The front line and what are known as the ‘forward areas’ received a great deal of shelling and were subjected to what were then known as the ‘five-minute madness’ being when the enemy would concentrate heavily on selected positions for a period of five minutes.

On 8 or 9 November 1916, Second Lieutenant Newland was leading his men of No. 2 Section to relieve the men of No. 3 Section when the enemy began one of their ‘five-minute madness’ shelling on the precise sector where the change-over was taking place. An enemy shell fell directly amid the relief party killing Second Lieutenant Newland, one other officer, three other ranked soldiers and wounding one other.

This was a sad loss to the company as both these officers were well respected and trusted leaders and had earned their commissions through the leadership they had shown in the field and their outstanding military ability. Some months later members of both No. 2 and No. 3 Sections of the 6th Machine Gun Company erected crosses over the joint grave of their comrades.

The unit’s diary notes this event as follows: 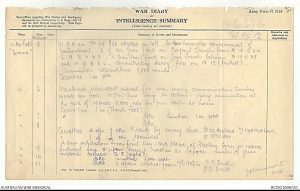 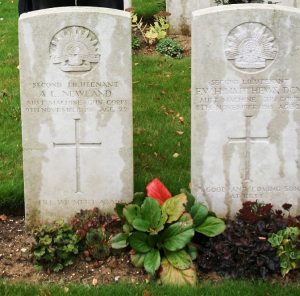 There’s an intriguing postscript to Second Lieutenant Alfred Newland’s military record. Dated 13 August 1918 almost two years after he was ‘killed in action’ his military service records note: “Brought to the notice of the Secretary of War, for valuable services rendered A.I.F. List 372/8-20/8/18”.

The following were presented to his parents:

The Memorial Scroll presented to Alfred’s father, was given for those who had died while serving in the Australian Imperial Force or Royal Australian Navy during World War 1. The Memorial Scroll bears the Royal Coat of Arms and a message paying tribute to the soldiers who gave up “their own lives that others might live in freedom”.

The Memorial Plaque was also presented to his mother. The round bronze Memorial Plaque is 120mm in diameter. It shows Britannia and a lion on the front and bears the inscription: “He died for freedom and honour”. Whilst his name is engraved on the right-hand side of the plaque, no rank, unit or decorations are inscribed, befitting the equality of the sacrifice made by all casualties. The shape and appearance of the plaque earned it nicknames such as the ‘Dead Man’s Penny’, the ‘Death Penny’, and the ‘Widow’s Penny’.

Mr. and Mrs. W. Newland, of Laverton, the proud parents of a self-sacrificing family of four soldier sons, all holding rank, have been officially in formed that their son on active service, Lieut. Lindsay A., has been killed in action. A glorious and honourable death has claimed a popular personality in “Lin,” as he was favourably called. Twenty-two years of age, of powerful physique, 6ft. 2in. in height, it was a typical Australian soldier that left here 20 months ago as a private. Favoured with a great personality and a slave to duty, he quickly gained distinction on the “never-to-be-forgotten: “battle fields of Gallipoli where he fought for four months, until the evacuation. Accompanying his battalion to France “Lin” received quick promotion from sergeant to sergeant-major to warrant officer, thence to stars, to wear which had been this young soldier’s ambition. Letters that have come to hand, written before Laverton’s soldier officer fell, speak in glowing terms of his work with his machine gun section. One comrade admirer in the rank “wrote of him as a “lion.” This eulogy was indeed characteristically short and to the point, but nevertheless, coming as it does from the field of operations, speaks volumes of Lieut. Newland’s worth. As an athlete, the lieutenant will be remembered by many as a brilliant road and track racing cyclist, and also a footballer of  unusual merit. On the bicycle he won many prizes, and prior to joining the forces for service abroad, great doings was expected from him by those well qualified to speak on the ability of an athlete. Mr. and Mrs. Newland still have two sons on active service, Captain Ernest, and Sergeant Herbert, whilst Staff-sergeant William, who returned from Gallipoli badly wounded, after doing sterling service as recruiting sergeant in a district in Gippsland, has been declared medically unfit. An in memoriam service, very largely attended was held by the Rev. Laceby Cecil at Laverton last Sunday.