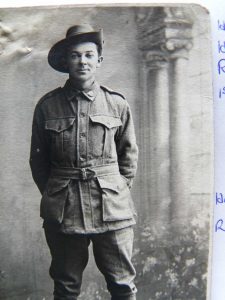 Harry Huntington Rhoades was born in Brisbane, Queensland on 1 December 1886, the eldest of four children born to Thomas Atkins Hainsworth Rhoades and Eva Jane Rhoades (nee Huntington). Harry moved from Queensland to Melbourne and married Elizabeth (Bess) Mary Margaret Adamson in 1913 and they settled in Yarraville where they established a seafood business. In 1916 Harry and Elizabeth moved to Laverton, with their one-year-old son Eric James and set about establishing a small grocery store and establishing the local post office in Railway Avenue.

Harry enlisted into the army on 18 October 1917 just two months short of his 31st birthday. He wasn’t the first of his family to enlist, his youngest brother, Frank Hethersett Huntington Rhoades enlisted on 28 September 1914 joining the 11th Light Horse and then 1st Light Car Patrol. His other brother James Hethersett Huntington Rhoades enlisted on 24 September 1915 and joined the 49th Battalion’s 3rd Australian Auxiliary Hospital.

In November 1917 Harry reported to the Broadmeadows training camp for training and was appointed to the 8th Reinforcements for the 38th Battalion at the rank of private. Following about six weeks of training, the battalion embarked from Melbourne, on 22 December 1917, aboard HMAT A38 Ulysses. With Harry now away at war, Elizabeth took over the running of the post office service and their small grocery business whilst looking after their two small children.

Shortly after arriving in England and undertaking training, Harry injured his left foot which required treatment at the 3rd Australian Auxiliary Hospital in Dartford in Kent. This was in March/April 1918, and he may have caught up with his brother James who was stationed at the 3rd Australian Auxiliary Hospital. It was shortly after that James got married in the local church.

Within three months of being discharged, Harry’s injured left foot was troubling him again and he was admitted to the Hurdcott Hospital in Wiltshire. Luck wasn’t on Harry’s side for no sooner had he be discharged from hospital and recommencing training he contradicted influenza and was again admitted to hospital. By the time Private Harry Rhoades had finally left hospital and recommenced training, peace had been declared, and he was assigned to the Convalescent Training Depot and then to the No 3 Group at Parkhouse, near Tidworth, Wiltshire.

Private Harry Rhoades returned to Australia aboard the HT Valencia arriving in Melbourne in July 1919 and was discharged from duty in early August 1919.

Harry returned Laverton and took up running the family business and local post office with his wife, Elizabeth. For a short period, between May 1920 and September 1921, Harry joined the Australian Air Corp/RAAF within their stores depot which was based in Laverton. By this stage their family had grown to three children and the Rhoades now became very involved within local affairs. Harry joined the Laverton Progress Association, serving as the secretary for several years and the Laverton state school committee. Their strong involvement within their local community continued until 1938 when they retired from running the post office and moved from the Laverton area to live in Pascoe Vale.

During World War 2, their son Eric James Huntington Rhoades enlisted and served within the Middle East with the 2/12 General Transport Company before taking ill and being transported back to Australia. He was then Admitted to the Heidelberg Repatriation Hospital where he spent nine months before his illness took his life on 5 July 1943. 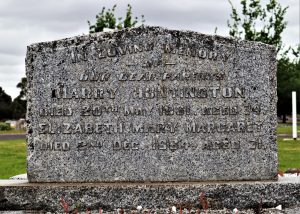 Around 1950 Harry and Elizabeth moved to Richmond where he worked as a salesman, before the couple moved to Caulfield at the commencement of Harry’s retirement. Harry Huntington Rhoades passed away on 20 May 1961, aged 74, and is buried within the Fawkner Memorial Park. His wife, Elizabeth Mary Rhoades passed away on 2 December 1964 and is buried alongside her husband at the Fawkner Memorial Park.