Alexander Stephen McPherson was born in Laverton to parents Arthur McPherson and Tabitha McPherson nee Oliver in 1897. He was the second son born to the couple Alexander’s older brother was Arthur William McPherson.

Arthur was employed by Victoria Railways and had been living and working within Laverton from the early 1890’s until the railways moved him and the family to Ballarat where he was to be in charge of the Burnbank Street railway gates. There was not automation in those days so the gates needed to be manually opened and closed when a train was approaching and then opened again to allow road traffic to proceed.

The couple had a third son Thomas Gordon McPherson (1900-1978) was also born in Laverton. Thomas may not have attended the Laverton school but there is a very good chance that his elder brothers did for a short period before their move to Ballarat.

Alexander completed his education in Ballarat and at the age of about 16 began an apprenticeship as a coach painter at a local company Sep. Morse & Co on Doveton Street Ballarat (Ballarat Motor and Carriage Company). His brother Arthur was also serving an apprenticeship at the company at the same time.

The two brothers were closer than just by age as not only were they working together but they were playing football for the local Miner’s Rest Football Club on the back line together in the Ballarat league. When the war broke out and they were both of age the two brothers enlisted into the AIF on 12 July 1915 in Ballarat and both were assigned to the 24th Battalion. At the time Alexander was 18 years old. Alexander and had some military experience as he had served for three years in the 71st Battalion Cadets in Ballarat.

Following their initial training the 24th Battalion embarked from Melbourne on board the HMAT A38 Ulysses on 27 October 1915. After the battalion and Private Alex McPherson disembarked in Egypt he was reassigned to the 7th Battalion and embarked to France in March 1916 however he spent most of the first three months in hospital with a minor ailment.

He rejoined the 7th Battalion on the Western Front when they were sent to the Somme where its first major action came in July during the Battle of Pozières. Throughout July and into August the battalion was committed to the fighting in two major battles losing 55 men killed in the first battle and another 83 killed in the second.

In late August the 7th Battalion with just over half its authorised strength was transferred to Ypres in Belgium where they operated trenches near the Ypres–Commines canal. During this period they were not involved in any major attacks however nightly patrols were sent out into ‘no man’s land’ to establish listening posts to gather intelligence. On 30 September the 7th Battalion along with its sister battalion the 8th Battalion mounted a raid on the German line at Hollebeke with a force roughly equivalent to two platoons about 50 to 100 men. 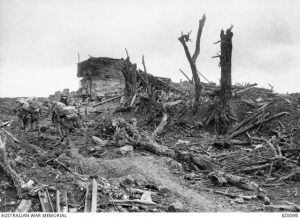 7th Battalion in the area of Pozieres

In the October of 1916 the 7th Battalion returned to the Somme where they spent the winter months manning trenches. By early 1917 hastened by the loss of the high ground around Pozières the German forces withdrew back to the Hindenburg Line in order to shorten their defensive line. When the withdrawal had been discovered the 7th Battalion launched what was meant to be a trench raid but this turned into an open advance seeing them extend their lines by 1.5 miles. At this point the advance was halted as the German forces had established themselves in strength before the Australians reached Bullecourt. During this year the 7th saw action at Somme Pozières and Ypres (Belgium). It was at the battle at Ypres October 1917 that Alexander would have heard of his brother receiving a severe gunshot wound and being evacuated from the front line. It would have been the last he saw of him until being re-united on his return to Australia in 1919.

In the following year Private McPherson and the 7th were in the thick of the action at the Hindenburg Line Bullecourt and then back at Ypres it was also at this time that Alexander was promoted to the rank of Lance Corporal. By September 1918 the 7th Battalion was withdrawn from the frontline with only 410 men left and the battalion remained out of the fighting until the armistice came into effect in November 1918. The 7th Battalion had suffered 1,045 killed and 2,076 wounded during their time fighting in the Great War.

Alexander remained with the 7th who returned to England awaiting transport back to Australia. Lance Corporal McPherson returned to Melbourne on 28 March 1919 on HMAT City of Poona arriving in Australia 15 May 1919. He returned to Ballarat to be re-united with his family and his brother Arthur who had arrived back home the year before. Alexander returned to his previous employment at the coach works in Ballarat and resumed his pastimes playing football alongside his brother. In 1928 Alexander Stephen McPherson passed away at the very young age of 31 pre-deceasing both of his parents. He was buried in the Ballarat Old Cemetery.

The honor board at the Old Laverton School contains mention of only one A McPherson as does the Werribee Roll of Honor that appeared throughout the war period printed in the Werribee Banner. Which of the two A McPherson’s do they refer to? We don’t believe it matters and suggest that it may refer to both but those preparing the roll thought perhaps that the entry may have been a duplication and only recorded one.