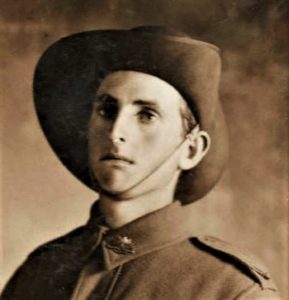 John Alexander Cameron was born in August 1891 in the township of Clyde, about four miles southeast of Cranbourne to parents Alexander John Cameron and Agnes Cameron (nee Spitty). John was the eldest of eleven children. In 1907 he moved with his family to live and farm in Laverton area. John was the only one of the Cameron children not to attend the Laverton school as he was 16 years old when the family settled into Laverton was being employed as farm labourer. It is not certain whether he was working with his father or on another farm in Laverton during this time.

On his enlistment form dated 17 July 1915, John Cameron advised that he had previously been rejected for military service due to the condition of his teeth. He must have had treatment for his condition, because on this occasion, he was accepted and completed his basic training at the Broadmeadows camp where he was appointed as a private of the 4th Reinforcements to the 21st Battalion.

Private Cameron and the 21st Battalion reinforcements embarked from Melbourne on 27 September 1915 aboard HMAT Hororata A20 which sailed to Egypt. After arriving, on 14 February 1916, Private Cameron and the 21st Battalion proceeded to Tel-el-Kebir for further training. A month later he took ill and was admitted to the 3rd Auxiliary Hospital at Heliopolis, Egypt with mild ear trouble.

His ear problem persisted, and on 8 April 1916, his case was subject of a Medical Board, in Cairo, which determined that the original cause of his ear injury was a case of measles nine years previous.  It was further determined that his existing condition had been aggravated by military service, and it was recommended that he be discharged as permanently unfit. Prior to him leaving for Australia, he suffered a further illness which kept him hospitalized until June 1916.

On 11 June 1916, Private Cameron embarked from Suez, and was invalided back to Australia aboard HMAT Itonus A50, suffering with chronic ear disorder.  Arriving back in Melbourne on 12 July 1916, he was welcomed back home at a reception at the Laverton school and was officially discharged from the service on 9 October 1916.

Two months later, John Cameron, now recovered, was either so committed to the cause of the war or wasn’t going to be outdone by his two younger brothers, re-enlisted at Melbourne, on 11 December 1916.  He was first sent to the Recruit Depot at Royal Park and then served at the military camp at Langwarrin between 1 January and 16 May 1917. Following the completion of his placement, at Langwarrin, Private John Cameron was transferred to the Broadmeadows camp where his knowledge and experience was employed until 15 August 1917 when he was transferred to the 20th Reinforcements of the 22nd Battalion.

Following the transfer to his new battalion, John will have realised that his time back in Australia would soon come to an end and that he would find himself shipping out back to Egypt or England before joining the 22nd Battalion in Europe. John Alexander Cameron took this opportunity to marry his sweetheart Eva Gertrude King. The couple chose to marry in the Methodist Parsonage at Hawthorn on 4 August 1917. A report of the wedding appeared in Eva’s hometown paper, the Murchison Advertiser, on 24 August 1917. Eva was the daughter of Charles King and Agnes King (nee Chinn) residents of the town of Rushworth.

The couple had three months together before Private John Cameron embarked from Melbourne aboard HMAT Nestor A71 on 21 November and they disembarked at Suez, Egypt on 15 December 1917. Having spent the Christmas period travelling across Egypt, the 22nd Battalion embarked at Port Said on 20 January 1918 bound for England.

After disembarking at Southampton, on 2 February 1918, the 20th Reinforcements marched into the 6th Training Battalion at Fovant, Wiltshire.  It was here that John Cameron was then appointed to the rank of acting lance corporal. They remained in England and undertook additional training until 22 April 1918 when they proceeded to France, via Folkstone. On 3 May 1918, John Cameron, and the 20th Reinforcements, joined the 22 Battalion who were now stationed at Querrieu, France.  They had just come out of the front-line and were about to move to Villers-Bretonneaux.  One week later, the Battalion went on the front at Mericourt to relieve the 39th Battalion.  Six days later, they themselves were relieved by the 21st Battalion and were able to rest and regroup at Ribemont.

On 19 May 1918, the Battalion took part of a planned attack on the enemy lines at Ville-Surancre. They were relieved on the following day by the 25th Battalion and withdrew to the rest area at Franvillers. During this rest period, John Cameron was treated by the 5th Field Ambulance for scabies but returned to his Battalion on 3 June 1918, whilst they were back on the front-line.

On 11 June 1918, John Cameron was again treated by the 5th Field Ambulance, this time for an ear infection. It was initially diagnosed as chronic otitis media, and he was transferred to the No 2 Convalescent Hospital at Rouen on 18 June 1918.  He was then transferred back to the No 2 General Hospital at Le Havre, as a ‘Not Yet Diagnosed’ case.  On 30 June 1918, he was transferred to No 1 Australian Convalescent Depot, suffering with otitis media. Given a month’s rest and care, he had made a recovery and was able to return to the 22nd Battalion on 7 August 1918.

By this time, his Battalion was in the trenches at Villers-Bretonneux, working in terrible conditions.  They were needed to work under the cover of darkness to bury communication cables but still came under heavy shelling, and all the time living in very muddy trenches.

The 22nd Battalion Unit War Diary describes the build-up for an imminent attack on 7 August 1918 around Villers-Bretonneux as follows: ‘Tanks getting into position.  Fresh guns coming into positions in rear and registering. Roads congested with traffic of all kinds, causing great inconvenience.’  The battle began on 8 August 1918, and involved troops from France, Canada, England and the Australian 7th Infantry Brigade, the 5th Infantry Brigade and the 3rd Division.

After seeing action for the remainder of August, the 22nd Battalion was rested for the majority of September at a place called Cappy (Somme) and were occupied in re-equipping and training activities.  At the end of September, they returned to the forward area at Bellicourt (part of the Hindenburg Line). On the afternoon of 3 October 1918, the battalion moved up to the Beaurevoir Line and formed part of the attack on this position.  They gained their objective, but John Cameron received a gunshot wound to his right shoulder and was treated by the 53rd Casualty Clearing Station. On 5 October, he was transferred to the 6th General Hospital at Rouen, before being transferred back to England and received further treatment at the University War Hospital at Southampton.

On 3 December 1918, he was discharged from hospital and granted two weeks leave, before reporting to the No 1 Command Depot at Sutton Veny. News of his injury was reported in the Melbourne press (The Argus, 24 October 1918). ‘Wounded – Mrs E.G. Cameron, Ermond Street, Rushworth, has been notified that her husband, Private J.A. Cameron (late of Laverton), is suffering from severe gunshot wound in right shoulder and back’.

Given that peace had been declared and the fighting was over, John Cameron did not have a long wait before he was able to embark on 14 January 1919 and returned to Australia per the SS City of York.  He disembarked at Melbourne on 27 February and obtained his discharge on 14 May 1919. Laverton held a welcome for its returned soldiers in the Laverton school building on 14 October 1919.  The evening consisted of a dinner and was followed by a concert and included a medal presentation ceremony. Amongst the returned soldiers that attended this evening, from the district, were his two younger brothers Alexander and William Cameron.

Shortly after John’s return, Eva Cameron and their son, Ivan Alexander, joined him in Laverton. In August 1919 John had applied for a farm allotment in Werribee South area under the Discharged Soldiers Settlement Act 1917 and was granted the lease of land in 1920. The allotment was referred to as Allotment 21 Section G and measured a little over 41 acres. The land was situated on Farrants Road not far from his brother’s allotment, that was situated in Diggers Road.

The Discharged Soldiers Settlement Act 1917 was an extension of the previous Land and Closer Settlement Acts and made special provision for the settlement on farmland by returned soldiers from World War 1. It represented the government’s actions to express, to the thousands of returned soldiers, the gratitude of a nation. The Werribee Irrigation Settlement in Werribee South was a subdivision of the Werribee Park Estate where allotments were granted under both the closer settlement and the discharged soldier settlement. 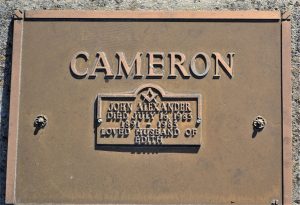 John and Eva Cameron, together with their family of seven children stayed in the district, farming land around the Werribee South area until the early part of the 1940’s when they moved to The Avenue in the Newport-Spotswood area. John’s wife, Eva Cameron, passed away in 1971 and is interred within the Williamstown cemetery along with two of their seven children, Duncan Charles and Ivan Alexander. John remarried within a year to Mildred Emily Barker but passed away, couple of years later in 1974. In 1977 John moved to Merton Street Laverton and remarried in 1978 to Edith Lovegreen Cradock (nee Taylor) and they lived in John’s Merton Street property.

John Cameron lived a long fruitful life but on 16 July 1983 at the aged of 92 he passed away and is interred within the Werribee cemetery.