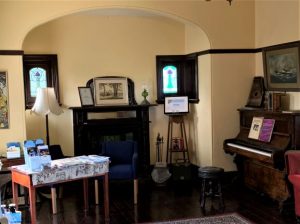 The room to the right as you enter the front door is nor referred to as the drawing room. The room faces south with views across Logan Reserve onto Port Phillip Bay and provides a magnificent outlook from the homestead. But it was not a part of the building until sometime after Alfred Langhorne had sold the Estate to the Phelps brothers. It would appear from documents and maps of the local area and estate that when the front area of the central section was glazed the east wing was extended so that it projected past the central section. A plan drawn by the Government Surveyor, Nathaniel Munro (1888) shows the glass area, the front of both the west and east wings now projecting out to approximately the southern wall of the current front hall. The current bay windows do not appear on the plan.

When William Henry Crocker purchased the Altona Estate, he made substantial additions and alterations. The property had been purchased from the Altona Bay Estate developers and considering sales of land had slowed considerably William Croker had decided to utilize the homestead as his principal residence. 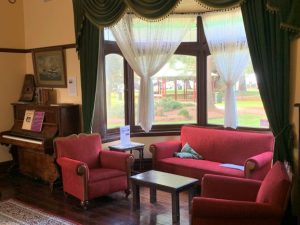 One such alteration was the expansion of the front of the east wing by extending the room eastwards to incorporate a fireplace/alcove and by adding the bay window to the front as you see them today. This created additional lighting to the room and afforded grand views across the front gardens towards to beach area and Port Phillip Bay.

This was only one of several alterations made during the first decade of the twentieth century. 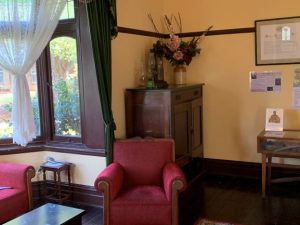