The room that is now referred to as the dining room is a part of what is believed to be the original homestead building erected by Alfred Langhorne but it was not as you see it today. The door at the south end of the room is believed to be the original front entrance that may have opened onto a small verandah and not the current hallway, which was added later in the early 1900’s. 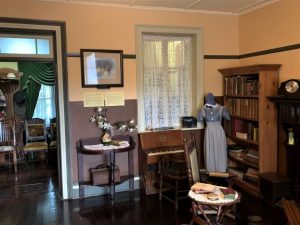 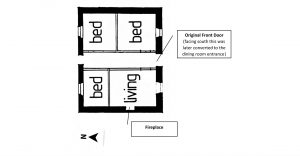 It is suggested that in the first build in the 1840’s the initial cottage may have looked as described in the plan to the left. Facing south, the window that you see on the righthand side of the doorway is part of the original structure and would have looked out over the property front gardens and towards the bay. The beach may not have been as visible as it is today due to there being sand dunes and small native bush between the homestead and the shoreline.

The room is believed to have had a hallway leading from the front entrance northwards to a rear entrance. Internally, looking towards the beach, the front room on the right would have been a living or drawing room which had a small fireplace and then a bedroom at the rear. On the left of the hallway, still facing towards the bay, would have been two bedrooms. One which would have had a window facing out to the south across the verandah to the front garden and towards the bay. At the rear of this section was a further bedroom. Both rear bedrooms, in the central section, would have had windows facing north and sheltered by a rear verandah. 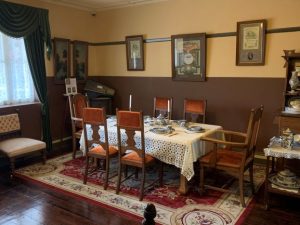 By 1888 this area had been changed with the front of the central section having been glazed in which would have been to keep the weather (southerly winds and rain) of the main entrance. By 1905 the new owner, William Henry Crocker had further improvements made to the homestead which included creating the new front hall by bricking in most of the glazed walkway and converting the central section into a dining/ballroom area. This area and the kitchen (west wing) were then joined via a server/preparation room. However, in the very early iterations of the Homestead the kitchen was a separate building to the main living buildings. 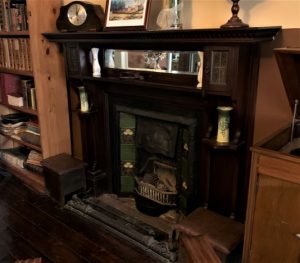