The early families who settled within the Altona/Laverton area had a tenacity and resilience that is hard to imagine, let alone put into words. Many were living without mains water, electricity or gas. Following World War 1 (WW1) came the recession and high unemployment. People did what they could to maintain their dignity and feed their families.  Altona seemed to offer a level of refuge to many given that it was close to the bay, rabbits were aplenty, and land was still relatively inexpensive, but big enough to grow crops or support cows and chickens. The Patton family was one of many families at the time that sought refuge in Altona and faced many tragedies, while also leaving behind a lasting legacy within Altona’s sporting community.

Walter Snr initially worked at the Newport meat works, whilst Alice ran a ‘butcher’s shop’ with meat her husband obtained cheaply. The store could be described as no more than an eight-foot square fly-wired structure, on their Queen Street property, from which she served customers. Several of the Patton boys also worked as slaughtermen in Newport.

During the 1920s, five of their children married and took up residence in Altona. Albert and Walter in 1923, Leslie in 1924, Dorothy in 1925 and Florence Alice in 1928. Florence Patton married football player Charles McDonald in 1928 at the end of his stint on the South Melbourne team, in the then Victorian Football League (1924 to 1928). He had played 57 games, with South Melbourne, but returned to play and coach the Altona football team. The Patton family were very sporty so they generously got behind the Altona football club, offering their support wherever they could.  Charles McDonald and a few of the brothers (Patton brothers) were also playing for the club.

Towards the end of the 1920s, the depression started to have its impact on employment and the Patton family was greatly affected.  At least Walter Snr, Albert, Herbert and Dorothy’s husband James Walker lost their jobs and ended up receiving sustenance payments for whatever work was available. In September 1931, the Patton family decided that they should try their hand at long line fishing to earn more money to support their individual families, which had now grown larger with grandchildren.

On Friday 11 September 1931, Walter Snr, his sons Albert and Herbert, and his son-in-law James Walker set out from Altona on a bay fishing trip in an 18-foot boat fitted with both a sail and motor. James Walker had married Dorothy Patton in 1925. Whilst James played football, he was a member of the Truganina Football Club.

The motor was giving them trouble soon after starting, but the Patton family continued their trip under sail as they were all experienced fishermen. Their intention was to check their lines near Point Cook, but it was reported that a few hours after the party left shore that the weather changed with a strong westerly gale hitting the area. When the party had not returned, search parties on boats and planes, as well as people along the shoreline searched for their boat, finding no wreckage or the four men. The Patton family had not only lost their breadwinners but three of the men were husbands and fathers in a single tragedy. Several weeks later, small amounts of the wreckage were found but the bodies were never recovered.

A relief fund was commenced by the Altona Ladies Benevolent Society, as (a further two?) were several funds conducted by the Argus and the Herald newspapers.  As the tragedy had left Albert’s wife and James’ wife (Dorothy) both with three children under seven, the intent of the funds was to raise funds to purchase both families a house each. The Argus newspaper fund alone had raised, by early November, over £400. Alice Patton too was supported but she also had help from her three remaining sons.

If the boating tragedy wasn’t already enough for the extended Patton family to get over, another one struck just five months later in February 1932. Leslie Stanley Patton, aged thirty, was 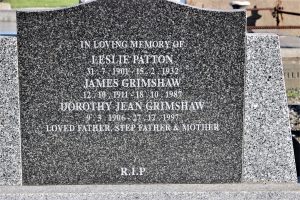 found dead in the salt works swamp Leslie had been out duck shooting with a group in the Laverton area, but a gun accident was not the cause. Later in the afternoon, the group had separated when he either fainted or collapsed, fell face down and drowned in a few inches of water. Leslie’s death left another Patton widow on her own with five young children to raise. The community again rallied to support the family and raise funds to complete the house that Leslie had started building.

However, the black cloud that was hanging over the family had not moved yet.  The following year on 7 August 1933, Albert Patton’s wife, Alice Caroline, died whilst in the Melbourne Hospital following sight surgery. Her death appeared to be from a hemorrhage. She left three children under nine in the care of their grandmother, Alice. Alice Elizabeth Patton was also providing support to her two other daughters and their combined eight children.

Alice Patton kept on caring for her family and her community, with her interest in sport within Altona being legendary. In 1953, at the age seventy-eight, she was elected as the Altona Football Club’s first and only female life member. Until the year before her death, aged ninety-one, she accompanied her grandchildren to bicycle and motorcycle races, as well as to football matches. She only just outlived her two remaining sons but her three daughters and sixty-four other descendants, including eleven great great-grandchildren, mourned her passing on 20 October 1966 at the Altona District Hospital. 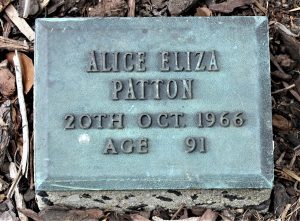 Alice Elizabeth Patton, the matriarch of one of Altona’s largest families, was interred at the Altona Memorial Park within the Court of Meditation (CTMD-LG-A-133). Even in eternal rest, Alice is encircled by her daughters Ruby, Dorothy and Florence.