Thomas Edward Lempriere leased the pioneering Seaford Estate established in Altona by Robert Cherry in the late 1800s. During his tenure in approximately 1900 to 1909, Thomas returned the property to a viable dairy farm and he was remembered fondly in the local community for the lavish breakfasts he would give at Seaford before they all headed off on a day’s hunt. A horse riding event that took up much of the day leading participants through the fields of properties in Altona and Werribee areas.

Thomas Edward Lempriere was born 16 September 1860 in the family home of Green Meadows at St Kilda, Victoria to parents William George and Jane Hall (nee McRobie) Lempriere, part of the second generation to be born in Australia. Thomas was the second eldest of 12 siblings, like his father, William George who too was one of a family of 12 all of whom were born in Tasmania, so it is understandable why the name Lempriere can often be found in historic records both in Tasmania and Victoria.

While they were a family of many scattered across the two states, they had the means to ensure their children were well educated according to the accepted standard of the day. Thomas Edward attended both Horton College, Tasmania and Geelong Grammar. They were a talented family and perhaps the most tangible example of this now can be seen in the continued success of Lempriere Australia Pty Ltd, the supplier of fine wool to world wide fashion houses the family founded in 1857.

After leaving school, Thomas Edward tried his hand at banking but that didn’t last very long, preferring the outdoor life. In 1885 he applied to lease 1,920 acres of land near Hay, New South Wales to develop into grazing land but then a tragedy happened in the family in May 1887 when his father was severely injured in a train accident on the Brighton line. William George Lempriere died from his injuries only four days later and was buried in St Kilda Cemetery. Thomas Edward was one of three sons named executors of their father’s will, and they signed a document on 3 August applying for probate, confirming Thomas Edward was in Melbourne then.

In mid 1888 he forfeited the conditional purchase of 640 acres of land in the Hay, New South Wales area.

Eventually he made his career in the dairy industry managing various properties in Victoria at the same time, so that he would often need to employ overseers to assist him. While he leased Seaford he also had interests in a property in Melton and possibly the Woodlands Historic Park north of Melbourne.

Thomas Edward was well respected for his knowledge of dairy herds and developed a method of dehorning young calves that other people in the industry were keen to follow. Cows without horns were considered to be more even tempered and easier to handle.

Thomas Edward knew his way around sheep too and in 1907 he was consistently selling sheep on the Melbourne live stock market.

About 1909 he gave up leasing Altona’s Seaford, although he continued to retain about 50 acres along Kororoit Creek to indulge his passion for country sports. He was an accomplished horseman and enjoyed participating in regular coursing events: riders on horseback following a pack of hounds chasing their prey, which could be a fox or a stag, across fields for miles until the prey was eventually captured. A well patronised event by people from all around Melbourne that would take place every so often in the Altona and Werribee area during the time. Plus there were those who didn’t feel safe on the back of a horse so they would join the hunt in carts that followed along. The hunt would always end at an expansive homestead where a sumptuous afternoon tea would be served. Thomas was a member of the Melbourne Hunt Club and won the prestigious Hunt Club Cup one year.

After giving up the lease for Seaford, Thomas Edward held farming interests in Warragul, Ferntree Gully, Cockatoo Creek and Rye, and owned at least one house in Lisson Grove, Hawthorn. In Rye it is believed he managed the “Devon” farming property in the 1920s. He was an active member of the area’s Brown’s Road League, formed by a group with properties along Browns Road, Rye who banded together to promote farming interests in the area. Thomas Edward held the position of secretary. Browns Road was named after James Brown who cleared much of the land and was selling parcels from 1914 for farming.

Eventually, on 28 June 1932 when he was aged 71 years, he married 58 year old Florence Isabel Batten, the sister of one of his overseers, Leonard George Batten. Florence was noted at the time to be Thomas Edward’s housekeeper and she had lived at Lisson Grove, Hawthorn for about the last 10 years, where Thomas Edward would occasionally be domiciled too. They continued to live there for about another 10 years before following Florence’s rather large family to where they were well established as graziers in the Whittlesea district.

In March 1944 Thomas leased Roselands Farm in North Whittlesea for the annual rent of £251/5/- ($502.50) payable half yearly in advance. At the same time he sublet the grazing land to RR (Milky) Kerr of Burnside Dairies Pty Ltd for the annual fee of £632/10/- ($1,265). This was just part of Milky Kerr’s growing dairy interests. He had a long history in the dairy industry including dairy supervisor and Red Poll herd supervisor with the Department of Agriculture at Werribee research farm. He was accredited with being the first person outside the metropolitan area to pasteurise his milk and provided this service to other dairy businesses in Whittlesea as well.

Thomas Edward Lempriere died on 15 July 1946 in Whittlesea so he only had just over two years at Roselands farm. Some time before this he transferred ownership of the Hawthorn property to his wife, Florence Isabel Batten, most likely to avoid death duties.

After a service in St Mary’s Anglican Church, Gleneira Road, Caulfield, the church that oversaw many Lempriere family events, he was buried in Brighton General Cemetery. 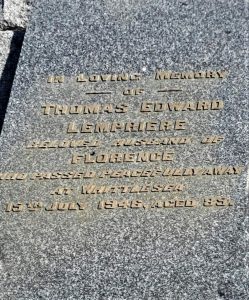 Thomas Edward Lempriere’s ancestry can easily be traced back to his grandfather, Thomas James Lempriere born 11 August 1796 in Hamburg, Germany to English parents Harriet and Thomas Lempriere. Thomas James emigrated from England in 1822 to arrive in Van Diemen’s Land (Tasmania). The following year he married English lady, Charlotte Smith in Hobart, and together they produced 12 children. Thomas James led an interesting and varied life that included working with convicts in a government role that eventually saw him rise to the position of assistant Commissary-General of Tasmania, a portrait artist of some repute, author and amateur naturalist.

The youngest sibling of Thomas Edward was Charles Algernon Lempriere born in 1875, 15 years younger than Thomas. In 1906 Charles married Dora Elizabeth Mitchell which may not resonate with most people until mentioning Dora was the younger sister of Dame Nellie Melba. Dora would accompany her older sister on her overseas trips, which she managed to continue to some extent after she married. Charles and Dora had one daughter that we know of, Helen Dora Lempriere.

The parents of Thomas Edward married in Hobart, Tasmania in 1855, but soon relocated in 1859 to Victoria where they lived out their lives in Green Meadows in St Kilda. Being from a large family himself, the father William George Lempriere, left a lot of family in Tasmania and one of them was a younger sister Lucy Maria Lempriere, aunt of Thomas Edward. Lucy married Alexander Reid who had migrated to Australia at a very young age with his parents Alexander and Mary Reid, also in 1822. They left Edinburgh, Scotland to settle Ratho Farm in the Tasmanian highlands, near the township of Bothwell and on the Clyde River. There were other Scottish settlers nearby and all had a connection with the new sport that was taking off called golf. Part of Ratho Farm became the first golf course in Australia. After Lucy and Alexander married in 1857 they lived at Ratho Farm further developing the property with improved pastures and extending irrigation schemes, plus raising a family. Their son, Alexander Arthur Reid born in 1864 eventually took over the property and as well as expanding the farm, he was active in formalising the social aspect of golf in the area into a club. James Herd, younger brother of Fred Herd, US Open Golf Champion and Sandy Herd, British Open Champion, is recognised as Ratho Farm’s first golf professional to attend Australia’s first golf course.