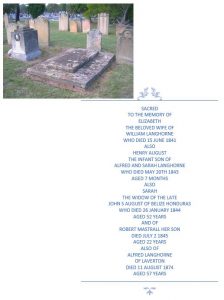 Alfred Langhorne (1817-1874) had ventured west beyond Willimastown to unoccupied territory. By the foreshores of Port Phillip Bay he squatted on land which was eleven miles south-west of Melbourne. Abiding with regulations he paced out a rectangular block of at least half an acre, marked it and then set about having a homestead built on the property. This was in 1841 and the Homestead was to become Laverton Homestead/Estate facing the sea. It was to be the home for himself and his new wife Sarah Marianne Langhorne nee August (1825 – 1871) and their family. It was a working estate and a focal point within the district for many miles and for years to come.

Sarah died at Laverton homestead and is buried within WIlliamstown Cemetery ( Church of England F, Row 12, Grave 1).
Alfred died in 1874 after selling Laverton and had moved to St Kilda. He was originally buried at the old Melbourne cemetery which was located on the site of the Queen Victoria market near Flagstaff hill. When the market expanded Alfred was reburied within the Fawkner Memorial Park (Old Pioneers, Grave 76). 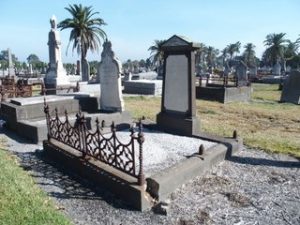 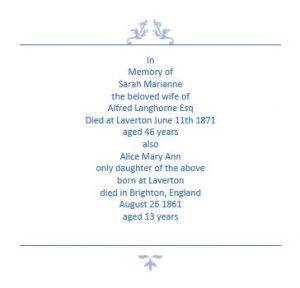