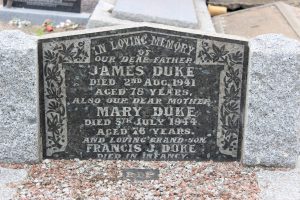 James Francis Duke was born in 1863 in Newham and married Mary Margaret Bell in Fitzroy on 9 February 1888. They had 12 children, many of whom had reached maturity by the time the family moved to Altona in 1917.

When they first settled here, they lived in a tent whilst their house was being built in Bayview Street, however it wasn’t long after that the Army acquired their home and purchased them another in Mount Street. James was a man for his community and he gave a great deal at a time Altona was still an emerging district. When James Duke first came to the district there were no churches, so he helped build one. Money was scarce so the Catholic Church was built from the funds he raised by organising functions. 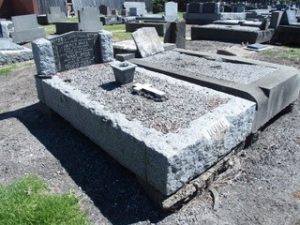 He was also a Commissioner for Affidavits and played an active part in the Progress Association.  He was a founding member of the Altona Life Saving Club, Altona Football Club, and Altona Cricket Club to name some of his achievements. James’ son George was the first soldier from Altona to return home after WWI and his battalion colours were purple and gold. These became the colours adopted by the Altona Football Club and remain so to this day.

James was part of the first committee organising the establishment of a new hospital in the local area, bringing the project to fruition when the doors in Pier Street opened in October 1932. He was described as a tall, stout and energetic man, quietly spoken and a true gentleman. There is a story that he let a man, his wife and large family stay in a house he owned rent free, and he lent money to members of the football club to buy their jumpers.