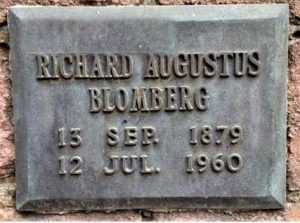 Mr Richard Augustus Blomberg (1879-1960) known as “Dick’’ to his many friends and Ellen Louisa Blomberg nee Fisher (1880 – 1958) where amongst Altona’s early residents moving into Pier Street around 1916/17. Richard was born in Australia to a Swedish born father and a British born mother.

The Blomberg’s ran a small store and tea rooms just north of Davey’s ABC Cafe, in Pier Street. Apart from their numerous commercial enterprises, Richard and Ellen will always be remembered for their many good turns to all who needed help in the days when Altona community was a mere handful of people trying make their homes.

Always prominent in any movement for the advancement of Altona. Mr Blomberg did much hard work as a member of the Progress Association, Ratepayers’ Association, ANA Lodge, and the Horticultural Society, to mention only a few organisations which have been responsible for establishing Altona as a suburb. Other than the tearooms the Blomberg’s also ran a general store, woodyard, post office and newsagency. Their arrival in Altona with a son and daughter of primary school age helped keep up school numbers so Altona’s teacher could be retained but this was not their only contribution to the fledgling town. 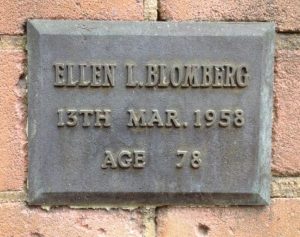 The Blomberg’s were also instrumental in the establishment and opening of the Altona Community Hospital, as the collector of memberships he would make regular rounds to households to collect the required sixpence and threepence. In those days few people owned a car so this meant many miles of walking over sandhills and unmade roads, almost in total darkness, in an effort to get many petitions signed and contacting people for numerous matters necessary to the running of any of these organisations.
Ellen Blomberg passed away in 1958 and was cremated at the Springvale Botanical cemetery and her ashes were interred there. Richard passed away two years later in 1960 and he was also cremated and his ashes were interred at the Springvale Botanical cemetery (Boronia Wall Niche G 354 and G 364). The Blomberg’s were typical of many pioneers to the area where nothing was to much trouble and their endeavour to build a community for the future was always in the forefront of their minds.