Many of our early European pioneers were noted for three personal qualities: their large-hearted progressiveness, their generous hospitality, and kindly disposition to

all people without distinction.  Many of the public institutions of our local area owe a debt of thanks for their earlier prosperity and success, as these families, without a doubt, wielded a great influence throughout the district. I use the word ‘families’ because it was not just one member of a family, but the many members of these early families that contributed to not just their own wellbeing, but the development of the area we enjoy today.

Albert August Ferdinand Stuber was born on 31 December 1876, in Swinemunde, Wollin, Germany to parents, Carl Stuber and Johanna Stuber (nee Wagner). Little is known of his early life or family, so our story commences in December 1900, when Albert was 24 years old.   Albert boarded the ‘Oceana’ in Hamburg and migrated to Australia, arriving in Melbourne in April of 1901, aboard the Prince Regent Leopold, via the South Sea Island. Albert gained employment as a stevedore close to his home in Williamstown. On 11 February 1902, he married Eva Seeger (1870–1919) at the Holy Trinity Church. Eva was born in Dunedin, New Zealand to German and Irish parents, Jacob Daniel Seeger and Elizabeth Seeger (nee Wilson). Jacob had been naturalised as a New Zealand citizen prior to the Seeger family migrating to Australia.

The Stuber’s settled into married life living in Osborne Street, Williamstown, and in 1904, the first of their five children, Albert Karl Daniel (1904-1981), was born. Fourteen months later, their second son Rudolph Paul (1905-1995) was born. Two years later in 1907, their third child, and only daughter, Elizabeth Eva (1907-2003) was born.  By 1908, the family had moved to New South Wales, in the Newcastle area, where they lived for two years and had their fourth child Robert George (1908-1986)  born in Kurri Kurri. By 1910, the family had returned to Williamstown where Albert and Eva purchased a house at 106 Hannan Street, and their fifth child Henry Ferdinand (1910-2004) was born. At this stage, things might have appeared ideal for the family as they just purchased their home and had steady employment in a busy port area, but the European scene was about to change, and the Stuber family would feel the consequences.

On 9 September 1914, Albert Stuber applied to the Department of External Affairs for naturalisation (however, we are not aware of his intention to apply or whether it had another to do with the trouble in Europe). Williamstown was a port area, so its population was frequently exposed to foreign sailors and migrants. Initially, anti-German speech in nearby Williamstown was mild, even regretful. Albert and his family were well-known and respected in the community, which was proved by the number of references to his character from local shop owners and the local police constable. Unfortunately, whilst his application was being processed and evidence gathered, the Minister for External Affairs instructed that no Germans under sixty should be naturalised.

Human nature being what it is, reports of World War One (WWI) were being heavily reported within the press, and this allowed for suspicions to be raised against the German immigrants living in Williamstown. The great irony of this was that most of the German immigrants and their descendants were not interested in what was happening in Europe. They had come to Australia to get away from Europe, seeking a better life for themselves and their families. Under the War Precautions Act of 1914, these suspicions were formalised and were applied to all with few exceptions. One of the instructions under this Act was that German immigrants were encouraged to ‘divest’ any property that they held. Due to the progression of WW1 and the media coverage surrounding it Albert and his family continued to stand out within the local community, as suspicions of German immigrants increased.

Around 1915/16, Albert had sold the family property in Hannan Street, with the intention of paying back his loan and setting up a business in Williamstown. It is not certain whether this was before or after he was fired from his job and now found himself out of work. However, before the sale could be completed in its entirety, Albert’s status as ‘not naturalized’ meant that the Victorian Titles Office could not register the transfer of land to the purchaser. Eventually, the federal department (should this say federal government or is it a specific department?) quoted legislation that overruled the State requirement and the transfer of land was finalised. By this time, Albert and his family had sought refuge from the hostilities that were looming within Williamstown, and the lack of employment prospects, having moved around the bay to a rented house in Altona, which was now slowly beginning to expand. At the time, north of the railway line from the Williamstown racecourse and Laverton, there were only eight people living in the area, being the seven members of Stuber family and Mr Goodson. South of the railway line, now known as the Seaholme, there were nine different families living in the area: the Sand, Fleming, Rayner, Harrington, Carr, Walker, Missen, Stone, McAree, Spriggs and Grant families.

Thankful for the limited amount casual work, he and his older sons could find at the Altona coal mine, near what is now Harrington Square or in building homes for newcomers to the area or repair works to public structures. The family stayed in Altona to become accepted as founding members of the suburb. The younger children were also a welcome boost to school enrolments. Additional to the odd jobs, Albert took up fishing for a living.

Being forced to support themselves with hunting and fishing, Albert and his two eldest sons went fishing off the Altona shoreline. As Albert Jnr. Recalls, within an

article of the Altona Star in 1971: “he was netting with his father and brother Rudolph between the Altona and Magazine Piers. A group of horsemen came galloping from all directions. It was about midnight. Some of them rode into the sea, completely surrounding the boat and net. They were members of the Australian Light Horse stationed at the powder magazine. The raid was made because someone had reported that a rendezvous was about to take place with a German submarine which was landing bombs. The raiding party only found a few schnappers and these were taken as evidence. After Albert Stuber senior paid a visit to the Victoria Barracks, he was never bothered again.”

Apart from this incident, the Stuber family settled well into the Altona community, assisting the Fleming family and others to establish the Baptist Church. When mass services commenced in 1915, in order for music to be played while singing, services were moved to the Stuber residence where there was a piano that Eva Stuber would play. 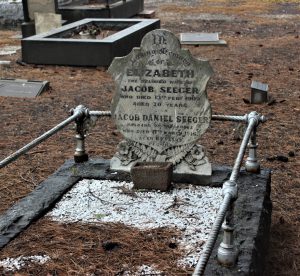 However, only four years after the family’s move to Altona, tragedy struck as Eva Stuber passed away on 3 August 1919. Eva was interred, with her parents, Jacob and Elizabeth Seeger within the Williamstown cemetery (COE B, Row 1.5, Grave 3).

Albert remarried in 1920 to Annie Amelia Price (1873-1959), who was born in Buninyong, Victoria, to parents William Walter Price and Anne Jane Price (nee Westbury). Annie had been married previously but both her husbands had passed away. Like his fellow pioneer residents, Albert Stuber continued to influence and contribute to the growth and progress of Altona. Together with his son Albert Jnr., the Stuber’s assisted new residents with the construction of their homes, as they were both carpenters. Early resident, Vera Wells, recalls that there were single-fronted houses that had been built by Altona’s first local builder, Mr F Leay, in 1923, and then larger houses with bay windows and pillared verandahs that had been built by Albert and his sons. Albert and his sons also undertook work on the restoration of the Altona railway station and the Explosive Reserve pier, which was a testament to the quality of their workmanship.

Albert August Ferdinand Stuber passed away on 28 August 1946 and was interred within the Fawkner Memorial Park (Garden of Remembrance 1, Section 8, Niche

OUU). Annie Amelia Stuber survived her husband and remained in Altona until she passed away on 2 May 1959 and was interred alongside her husband at Fawkner Memorial Park.

The Stuber connection with Altona did not stop there though, as Albert Jnr. and Rudolph remained living and working within the Altona area. In early 1964, Rudolph headed a deputation of rate payers from the area bound by Mount Street, the railway line, Acacia Avenue and Civic Parade to find a solution to the flooding issue that affected this low-lying area of the suburb. This resulted in additional drainage being placed from Cherry Lake and in the vicinity of Acacia Avenue. The local Council agreed to take up the matter with the Board of Works who were responsible for this task and had previously promised that action would be taken.

Of their five children, Albert Karl Daniel Stuber married Ivy Lily Neale (1904-1988) on 27 October 1922, in Footscray and they lived in Civic Parade (Nellie Street) until his death. Albert passed away on 5 October 1981 and was interred within the Altona Memorial Park.

Rudolph Paul married Elizabeth Ann Richards (1907-1999) on 13 October 1933, in St Eanswythe’s Church Altona. They were in fact the first couple to be married within the new church building. Rudolph also served in the Volunteer Defence Corps, from 22 April 1942 to 7 October 1945, during World War Two (WW2).  Their daughter, Coral Dawn Stuber, became a champion ice skater which competed around Australia and overseas. In October 1954, Coral married Australian champion tennis player Mervyn Rose, but unfortunately their marriage ended in divorce.

Their youngest child, Henry Ferdinand Stuber married Jean Christina Mc Lean (1912-1984) in 1927. The couple lived in the Newport area where Henry had employment. Jean passed away in 1984 and Henry in 2004, with both being interred within the Altona Memorial Park.