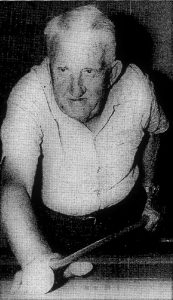 Dickenson Street, Altona Meadows, was built and named in 1976 and was extended around 1988/89 as this area of Altona Meadows developed, due to increased housing and population. This street was named to recognise the untiring contribution to Altona by Bill (William) and Nellie (Ellen) Dickenson, early pioneers to the area.

Bill was born William Joseph Dickenson on 28 June 1886 at West Melbourne to parents Henry Dickenson (1842-1918) and Margaret Mary Dickenson nee Hutchinson (1845-1915). The family were living in the North Carlton area when Bill commenced working for the British Australia Tobacco company in Yarraville, working with them for over 50 years till he retired when he was 73.

Bill married Ellen Margaret O’Connell in Fairfield 29 September 1913 and the couple lived for a short period in North Carlton before moving to Alphington around 1915. Ellen (Nellie) was born in 1888 in Londonderry, Northern Ireland and migrated to Australia circa 1910 with a party of 20 or more Irish lassies who came to Australia to work in a shirt factory. Her parents were William O’Connell (1843-1916) and Mary Ann O’Connell nee McCelland (1849-1934).

The couple settled in Altona with their family in 1921, moving into a house in Bay View (Bayview) Street. They had three sons when they arrived in Altona: William Joseph, John Redmond and Daniel Mannix; and two daughters, Ellen Margaret and Mary Patricia, who were born after they settled within Altona.

Nellie Dickenson literally saw Altona grow up around her. She was at the Catholic Church’s first service in Altona, and together with her husband, was associated with much of the Church’s activities through the years. She was a member of the first Altar Society, established by Father Ken Morrison in 1937, and was an early worker in the St. Mary’s Mothers Club. With her husband, Nellie was keenly interested in Altona’s local life and together they were original members of the Progress Association. In her later years she became a founding member of the Elderly Citizens Club. Nellie also ran one of the lolly shops in Rayner (previously Fanny) Street next to St Mary’s Catholic Hall. 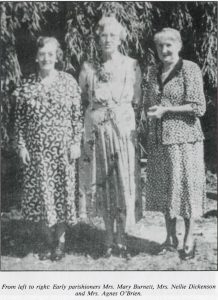 Bill founded the Altona branch of the Australian Labour Party (ALP) and was its first president in 1923. He served in every position excluding secretary until the split in 1955 where he become a member and president of the local Democratic Labour Party (DLP) branch. As a committee member of the Progress Association, he lobbied the Board of Works to obtain a water supply for Altona. His persistent approach to the Catholic Archdiocese of Melbourne was one factor in St. Mary’s having its first Administrator (Fr Ken Morrison) appointed in 1937.

In 1923, Altona residents learned that a sewage drain was to traverse their district, and a vigorous protest was mounted by the Altona Progress Association, led by Messrs Dickenson, Douglas, Murphy and Susman. In response to criticism, the shire agreed to enquire about the nature of the proposed discharge. This wasn’t the only time the Dickenson family was to take up a fight with council. In 1935, the appalling state of Altona’s side streets prompted a female deputation to the Werribee Council. Mesdames Briggs, Pugsley, Dickenson, Gadsden and Doherty-Keightey could spare the time to attend afternoon Council meetings where their working husbands could not. These women were all good with words and had the councillors going shades of pale at their description of the consequences of installing a drain – roadway hazards and the costs of fitting out a family with rubber boots against the mud. Councillors then blushed red at the image of women having to climb over fences because their gateways were barred by impassable bogs. The result was that the streets were slowly but surely upgraded, with Bayview Street, between the railway and Nellie Street (Civic Parade), being one of the first.

Bill and Nellie, like so many others during the early days, sought to improve Altona for all of her residents then and in the future. They saw the potential of what was sometimes referred to as the ‘Cinderella’ of the western suburbs and set about turning it into the princess she has become.

Ellen Dickenson, a resident of Altona for 50 years, passed away 21 September 1969, at the age of 81 years.  Bill Dickenson passed away 8 January 1981 and was laid to rest with Ellen at Altona Memorial Park (Robinson Lawn (A) Row 1 Grave 42). 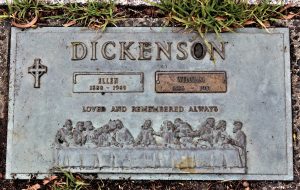