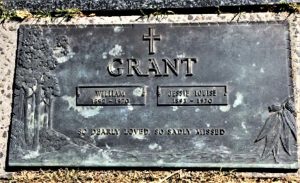 William Grant (1892-1970) and wife Jessie Louise Grant nee Kirkham (1893-1970) are another generation of the Grant dynasty within Altona. William came to Altona with his parents and grew up at the explosive reserve so there is little wonder that he started working there with his father. He eventually took over as manager and by this stage there were 40 employees at the reserve. Living in Queen street he would ride a jinker down Pier street and then along the beach to the reserve as Queen street did not connect to the reserve in the early days.

William Grant was also known as a keen sportsman. He was a life-member of Williamstown Football Club for whom he played in 1910 and the Altona Bowling Club. He also coached Werribee Football Club in 1920-21 and was associated with the Altona Cricket Club as a player during its formation years. William was also a member of the committee of  the Altona Community Hospital for some years. William and Jessie are buried within the Altona Memorial Park (Robinson Lawn (A), Row 15, Grave 16).