Charles William Borrack was born 1 November 1865 in Rokewood, a small Victorian rural township approximately 44 kilometres south of Ballarat on the Ballarat-to-Colac Road. Charles was born to a father of the same name, Charles William Borrack, and mother Ann Borrack, nee McConelty, farmers living in the Corindhap district. Charles was the second of three sons born to Charles Snr and Ann Borrack.

At a young age, Charles must have decided that the farming life was not going to be for him, as he commenced studying to become a teacher in December 1882, at the age of seventeen. Charles completed his studies, gaining his teaching license by 17 April 1885. He initially undertook several temporary teaching positions across country Victoria before being transferred to his first permanent position at the end of 1886. The 1888 directory notes Charles as living within the town of Garvoc, south of Terang. There appeared to be three other teachers listed so he and the others appeared to reside at Garvoc as it was central to several outlying schools. The directory also notes that the town contained a hotel and post office, with postmistress Miss Mary Dobrigh, who must have made an impression on the young Charles, as we will see shortly.

In 1891, Charles was transferred to the Lyal Primary School, which was located between Castlemaine and Heathcote. He was remained at the school until 1901. It was during this time that he married the former postmistress, the aforementioned Mary Dobrigh (1866-1955), on 23 September 1893 at St Kilian’s Catholic church in Bendigo. Mary was the only daughter of her family’s six children. Her parents were George Dobrigh, and Mary Dobrigh, nee McMahon, of Hargreaves Street Bendigo.

By the time that Charles had been transferred from Lyal to Lower Emu Creek Primary School, Charles’ and Mary Dobrigh’s first four children had been born: Charles William (1894-1962), Veronica Mary (1896-1973), Leo George (1898-1956) and Mabel Eleanor (1900-1973). Charles taught at Lower Emu Creek until midway through 1913, when he was transferred to Wonthaggi Primary School (in South Gippsland) to be the assistant teacher. The township of Wonthaggi had only been proclaimed in 1910 and was key to the coal industry. By the time of they had moved, the Borrack family had grown to include seven children in total, with three further children: Gerald Clement (1902), Kevin John (1906-1958) and Francis Joseph (1909-1913).

Over the years, numerous news reports noted the departure of the Borrack family from the towns  Lyal, Lower Emu Creek and then Strathfieldsaye, and others. These reports noted that the family gave their all to the growth and prosperity of their communities. They were not there to just educate their children but to also add whatever they could to the towns and their citizens. (Bendigo Advertiser, 3 September 1901, p2 & The Bendigo Independent, 2 Apr 1913, p5).

The Borrack family remained in Wonthaggi until the end of the 1920 school year, when Charles was appointed as the headmaster of the Altona Primary School. Besides Charles, the Wonthaggi school had three more of the Borrack family as teachers and Gerald, as a student, at the school. Veronica taught from 1915 until 1920, Mabel from 1918 until 1920 and Leo during 1917. Only Mabel followed the family to Altona and to Altona Primary School. At this point in Altona’s progress, classes were being conducted from the Progress Hall in Blyth Street and the school had about 160 students. Charles had taken over from Mr George who had been the acting headmaster for a year. The first thing that Charles would have observed was that the building and classes were overcrowded, with some classes needing to be transferred to Davey’s ABC Café near the Altona Pier.

While the family was settling into their new accommodation at 105 Blyth Street, Charles was busy appealing to the school committee to lobby the Department, with an urgent proposal to build a purpose-built school building in Altona. Charles had a strong supporter in Laurence Fleming who, with his wife Ann, had initiated schooling from their own property. They almost immediately gained approval, with support given by parliamentarians Andrew Robert Robertson and John Lemmon (State parliament member for Williamstown). By May the education minister, Sir Alexander Peacock, had promised to build a school for the following year. A three-acre site adjacent to the railway was chosen for the school. It was located on the corner of Blyth and Upton Streets, and in October 1921, work on the first stage of a two-stage plan started. The upcoming school was a brick building planned to accommodate 400 students.

The first stage of Altona Primary School No. 3923 was officially opened on this site in November 1922 by the Education Minister, Sir Alexander Peacock. Charles William Borrack now had a new school building consisting of four classrooms and a Head Teacher’s office. Initially there were 225 students and five teachers. One of these teachers was Charles and Mary’s daughter Mabel, who had transferred from Wonthaggi to Altona Primary School. Later, she taught at St. Mary’s School and Mt. St. Joseph Girl’s College. Their eldest son Charles William, who was not a teacher, joined the Catholic priesthood instead. 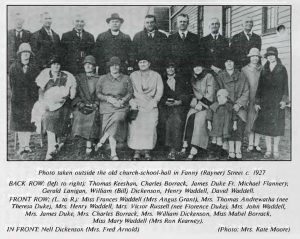 The Borrack family was not one to let the grass grow under their feet. They eagerly participated in several initiatives within their new hometown. A history of St Mary’s Catholic parish notes a meeting of historical importance, held by about twenty of Altona’s Catholic residents, which took place on the 17 July 1921. The purpose of this meeting was to determine a way for Mass to be celebrated in Altona. In her book, a ‘Short History of St. Mary’s Altona’, Mary Borrack wrote that the meeting started a subscription list to raise funds, asked two ladies present to provide vestments and altar linen, and hired the Progress Hall for five shillings (50 cents) as a venue in which to hold the Mass. Charles Borrack was also one of the convenors of this meeting which resulted in the Mass first coming to Altona. Additionally, Mabel was the sacristan who decorated and prepared the altar for Mass from 1921 onwards. Her mother, Mary, was president of the first Altar Society which was formed in 1937.

In 1923, Charles Borrack was a member of the Altona Bay Widows’ Fund, which had been raised to support Mrs Davies and Mrs Macpherson. The other members of the fund included Mr Samuel Fripp, who was appointed Chairman; Cr John Liston, Mayor of Williamstown; and Major-General Robert E Williams. The widows supported by this trust fund received £4 each a week, whilst the committee sought further means to assist them, some of which were beyond the scope of the fund.

The Borracks were by now fully involved in the progress of Altona and its residents’ welfare, which was extending beyond the Altona Primary School and St Mary’s parish, to other much needed services and local sporting clubs. By the later part of the 1920’s the population of Altona had grown particularly around the Seaholme area of the town, which had opened up around 1921. Parents in this part of Altona approached Charles Borrack, as the Headmaster of Altona Primary School, to seek his support in gaining permission to open a junior school in Seaholme. In the July of 1929, under Charles’ jurisdiction, the Education Department agreed to commence schooling classes in a hall that had been rented from Albert Marion. Such was the nature of his support that one of the school sports houses is titled Borrack, after Charles himself.

In November 1930, after having worked for the Education Department for some 48 years, Charles William Borrack retired at the age of 65. He had spent ten years as the Headmaster of Altona Primary School and as he had at so many other schools, he was beloved by parents and students alike. But if Charles and Mary thought retirement was going to mean travel and sitting back in their seaside suburb, they were very much mistaken.

In the same year that Charles retired, his daughter Mabel, who had taught by his side at Altona during these ten years, was transferred to Williamstown Primary School. Mabel continued her teaching career until 1965, when she retired after 47 years, of which the last eight years were at Brooklyn Primary School. Mabel had also taught at Newport and Seaholme primary schools over her working life. She noted, within her farewell speech to the school, that her grandfather had also taught at the Ballarat School of Mines.

It wasn’t long into his retirement that Charles found himself assisting in the community once again, this time concerning the welfare of residents. The local medical officer, Dr Louis Joel, who had persuaded members of the Altona Progress Association of the need for a local hospital, which would be paid for by a subscription from residents. Interestingly, Charles had served with the Wonthaggi hospital fundraising committee, during his time there, which was funded in a similar manner to the Altona Community Hospital. By 1932, a vacant house in Pier Street had been rented, renovated and fitted out as a small hospital under the supervision of Sister Weber. The hospital committee was headed by Charles who worked alongside other quintessential residents such as James Duke, John O’Brien, Charles Lugg, Richard Blomberg and Peter Payne. No sooner had they got the hospital up and running then they were lobbying to acquire land and seeking funding to build a purpose-built hospital.

The early 1930’s saw hard times hit, and Altona and its residents were not spared. Many were out of work and surviving on truly little. Charles was called up again to guide and support the residents of his town. By 1933 there were ninety men on the unemployment list within the Altona Riding, which, given its population, would have equated to twenty-six percent or even more. Charles was added to Werribee’s assistance committee to provide support for residents through local work initiatives. Charles was still the sustenance paymaster in 1939 when he was in his mid-seventies and continued until at least 1941.

Ten years on, the couple celebrated their Diamond Wedding. Again, Thanksgiving Mass was celebrated by their eldest son and served by two of their grandsons, Nicholas Toner and Anthony Borrack. A reception presided over by Reverend Father Nooney, parish priest of Altona, was attended by a large number of relatives and friends. Among them was Mr George Dobrigh, who was present at Charles and Mary Borrack’s wedding 60 years ago. Father Nooney paid tribute to their work during their long association with the parish; their pioneering spirit and actions in various parishes of the State, and finally their great joy of being present at Mass celebrated by the Borrack’s son. Tribute to Mrs Borrack’s wide and numerous activities, both in Church and State organisations, was stressed by supporting speakers. 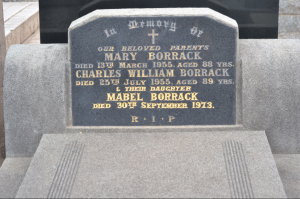 It was only two years later, on 13 March 1955, that Mary Borrack passed away at the family home in Blyth Street aged 88. Following service, Mary was interred within the Williamstown cemetery (RC Section K, Row 3, Grave 7).  Their love was so strong that Charles Borrack also passed away, at home, on 25 July the same year, aged 89. Charles is interred alongside Mary within the Williamstown cemetery.

Tragedy struck the Borrack family in September 1973 when Mabel Borrack and her sister, Veronica Toner, were involved in a fatal car accident in country Victoria near Eaglehawk. As a result, both sisters died at the scene of the accident. Mabel Borrack is buried alongside her parents in Williamstown cemetery and Veronica Toner in the Templestowe Lawn cemetery (Read Lawn, Row F, Grave 6).