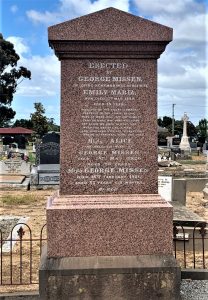 George Missen was born in Great Wratting (Thurlow) in Suffolk England before coming to Australia with his parents in 1853. They initialed lived in South Australia 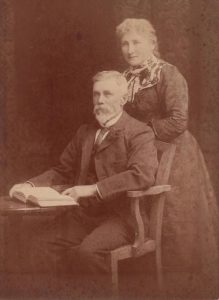 where he married his first wife, Emily Maria Barton, on 6 April 1858 at Victor Harbour. The family moved to Victoria circa 1866 and prior to purchasing land in Altona, George was a prominent citizen of Werribee. Not only did he run a butchery within the town but he served as a councillor for six years. Alice was George’s second wife after he lost his first wife Emily Maria Barton in 1889 and with a large family to look after the families need for a mother was great.

He had bought land and settled on the Altona estate in the 1890s, bringing his dwelling with him and re-erecting it on the corner of Queen and Sargood Streets. In conjunction with Alice and his eldest son William John, George combined farming and grazing with a district butchering business. George also brought his experience and knowledge as a councilor to the new township and assisted in bring residents together to resolve a number of local concerns and to drive progress within the town. At the time of Alice’s passing, in 1920,she and George were living in Champions Road but owned 4.5 acres in Altona (Fanny – Rose and Queen Streets) as well as 24 lots of land in Laverton. 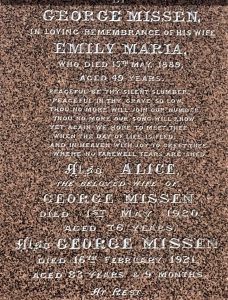 Alice passed away in May 1920 and George Missen died in February 1921, less than a year after Alice, when he suffered a broken leg in an accident from which he failed to recover. George, Alice and Emily are buried within the Melton cemetery.