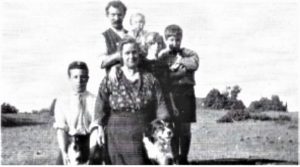 Lawrence Fleming (1879-1962) and his wife Annie Rose Fleming nee Hall (1879-1956) moved from Newport with their young family to live in Blyth Street, Altona in 1914. They played a major role in the development of education, health and religious institutions in the early days of Altona. In fact the Fleming’s built a hall on their property to act as the first school before the school moved to the old Progress Hall.

Lawrence lost his father when he was very young (his father drowned in the Saltwater, now Maribyrnong river) and when he was 12 years of age worked to help support the family.

Mrs. Annie Fleming (nee Miss Annie Hall) was of a strong Christian faith and attended the Anglican Church in Melbourne Road Spotswood. Annie (also known as Ann) was an experienced Church of England Kindergarten and Sunday School teacher before being married to Lawrence Fleming.

Their house at 30 Blyth Street was built in 1895 by fishermen during the land boom and bust of the 1880’s (it still stands to this day!). Lawrence Fleming grazed up to 15 cows, three horses and a poultry flock of 120 hens, to supplement his wages from the Newport Railway workshops. Lawrence did most of the milking and Annie took care of the daily running of the stock and produce, assisted by their sons after they had reached five or six years of age They sold milk to local families and made butter. They also invested time and money into pig raising.

After they had settled in Altona the Fleming couple saw a need for Sunday School activity for children in the district, including their own. Only a small number of families lived in the area at that time, about eleven houses and 20 people from the coal mine (in the area where Harrington Square is today), to Millers Road. However numbers swelled over the Christmas holidays with people flocking to the beach and living in tents along the beach front.

Mr. Fleming being a Sunday School teacher organised for the Newport Church of England Minister to come and hold beach services at Altona, but because people attended in their neck to knee bathing costumes, he said it was the wrong place to start a Sunday School and he would never come again! He also asked the Methodist Minister but again he would not come unless people could dress properly!

The beginnings of what was to become Altona Baptist Church (elsewhere referred to as ABC) occurred in March 1915 when Mr. Lawrence Fleming asked a fellow workmate, Mr. George Loft (who was also a Sunday School teacher at the Baptist Church in Newport) to come and start a Sunday School class. Both George and Lawrence worked in the Signal Branch at the Railway Workshops at Newport.

Mr. Loft, together with his family, came and taught the children and within five weeks it had grown to fifteen boys and girls. He also held a service for adults. Both events were held in the Fleming home at 30 Blyth Street. The first service was held in the Fleming’s front room on 1 February 1915. The Harrington and Stuber families joined them by the end of February, so the group began to grow.

Mr. and Mrs. Fleming told Mr. Loft they were prepared to build a Hall in their backyard. This they did and by the end of March 1915 they had completed and opened the Hall, measuring 30 feet by 11 feet 6 inches (this Hall was also used as the first School room later to become Altona Primary School). Meetings continued there until the end of 1917 when the Hall became too small.

Mr. Fleming was concerned for the educational and spiritual needs of his family. Being informed that a teacher would only be supplied by the Education Department if a School Hall was available, Mr. Fleming had more than one purpose in mind when he built the ‘Hall’.

An agreement was struck between Mr. Fleming and the Victorian Minister for Public Instruction, with the Government renting the Hall for 12 pounds per annum. In November 1915 teacher Miss Christina Bavington commenced classes with 11 students. The School was to be number 3923 in Victoria.

For many years Mr. Fleming worked hard with the Government to establish a permanent School site. Mr. Fleming was largely responsible for having a permanent State School built in Altona. In November 1922 the present Altona Primary School was opened with 5 teachers and 225 students at the corner of Blyth and Upton Streets. 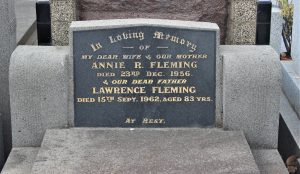 Larry Fleming tells of the time when his mother, Annie, would serve tea to the soldiers and their wives or girl friends, when the Army had a camp in Altona during the earl years of World War 1. Lawrence Fleming was a strong supporter and worker for the Altona Community Hospital, he served on the Horticultural Society, started the Racabite Lodge which ran for many years. One of their sons, Thomas, join the ministry of the Baptist Church and take on a missionary position at Yreadurma, 185 miles north-west of Alice Springs. Annie Fleming was just as involved within the local community as was Lawrence. Annie in the School committee, Progress Association and just about worked or supported any cause that was started for the betterment of the Altona area. 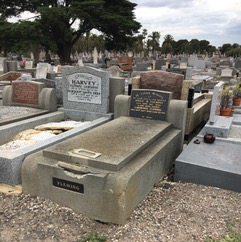