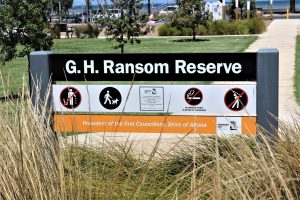 G. H. Ransom Reserve is a popular local reserve that supports a variety of relaxing recreational activities. The reserve is located near the intersection of Grieve Parade and Queen Street, with its southside boundary being on the Esplanade, along the western end of the Altona foreshore.

Initially, this property was set aside during Victoria’s centenary celebrations in 1934 as a caravan park for visitors. However, about 25 years later, it was named to acknowledge the contributions made to the area by George Henry Ransom.

Ransom was born in 1899 in Jarrahdale, Western Australia, to parents Robert Thomas Ransom and Maude Mary Ransom (nee Nichols).  He was the second of two boys born to the couple. His elder brother, Frederick John, was five years older, being born in 1894.

Private George Henry Ransom served with the AIF 57th Battalion in World War 1, enlisting in Melbourne on 16 November 1917, and returning to Australia on 19 April 1919. The 57th saw great action during this time on the Western Front, being involved in battles along the Hindenburg Line, as well as in Bullecourt, Polygon Wood, 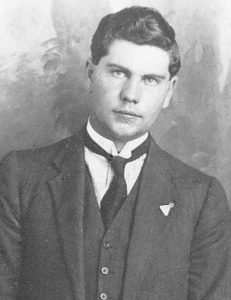 Ypres, Viller-Bretonneux and St Quentin Canal. In late September 1918, Ransom suffered a gunshot wound to his right arm and leg and was eventually evacuated back to England for treatment and rehabilitation. In early 1919, he returned to Australia for further convalescence before being discharged.  Ransom ultimately returned to his family in Mildura and went back to work. By the 1930s, he had moved to the Melbourne suburb of Northcote, working as a horticulturist.

In 1938, George Henry Ransom married Ada Jane Beckwith (1892-1955). They were both working at the munitions factory within Maribyrnong, which is where they originally met. The couple moved to Altona in the mid-1940s and Ransom quickly engrossed himself into local affairs. His first attempt to enter local politics occurred in 1951 at the election to fill John Grant’s vacancy for the Altona Riding. The independent Eric William Ward, a line foreman with the State Electricity Commission, easily outpolled Ransom as the endorsed Labor candidate. While voters did not have a personal bias against Ransom, many residents were repelled by the pressure tactics of his group, the Altona Ratepayers’ Association. This association had been formed in early 1951 by Labor activists.

At the Werribee council elections in 1954, Ransom was finally successful in the polls and served for the final three years of the Altona Riding, with councilors Harry Kim and Reg Logan. In 1957 when Altona seceded from Werribee, Ransom was elected to the new Shire council. Give the inexperience of the new council and that further elections were to be held that August, Ransom was elected president for this ten-week period.   He served a further two years until the election in 1959 when he retired at the age of 60.

George lost his wife in 1955 during his time as a councilor and following his retirement he continued living in Maidstone Street until his death in November 1969 whilst at the Heidelberg Repatriation Hospital.  He is interred within the Fawkner Memorial Park (4th Avenue Wall 1, North Side, Section W, Niche 166). His wife, Ada Jane Ransom (nee Beckwith), is also interred within the Fawkner Memorial Park (Serenity Close Garden Niches, Garden Bed 1, Niche 59). 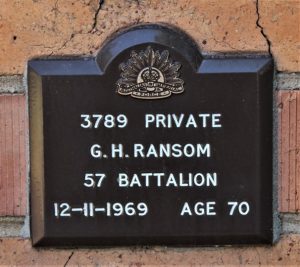