The F J KIRK OVAL is the home of the Altona Cricket Club and is situated within J K Grant Reserve Civic Parade, Altona. This oval was named after: Francis (Frank) James Kirk (1919 – 1976). 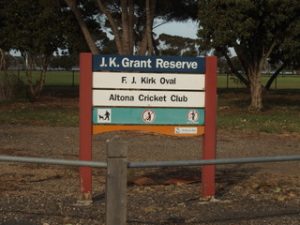 Frank was a foundation member of the club in 1961, was also its first president, captain for several years and was honoured by being made a life member. He was instrumental in having the club promoted to play in the Victorian Sub-District Cricket Association competition.

Frank was an outstanding player with both bat and ball, scoring over 100 several times with his top score an amazing 279, normally winning the batting average competition. He won the bowling award six times with more than four hat tricks and his best performance was nine wickets for three runs. His wife Effie (Ethel) supported him by undertaking the scoring duties at games.

Frank died of a heart attack while playing the traditional “oldies versus youngies” match during the annual Christmas camping holiday at Newbridge, in rural Victoria. At the time of his death when he was only 57 years of age and was the senior vice president of Altona Cricket Club having been a member for 16 years. The F J Kirk Oval was named in Frank’s honour by City of Altona council, not only for his prowess on the field, but also his dedication to encouraging youth to participate in cricket and administration of the game. The club further acknowledged Frank’s contribution to cricket by naming after him the best and fairest annual award for their First XI team, the Frank Kirk Medal, first awarded in the 1979-80 season. 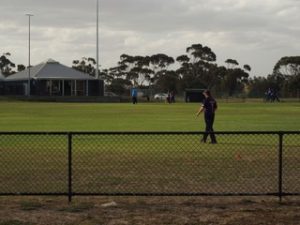