LOGAN RESERVE is located in between Pier, Queen, Sargood Street and the Esplanade and is the home of the Altona Homestead. It has over its life been many 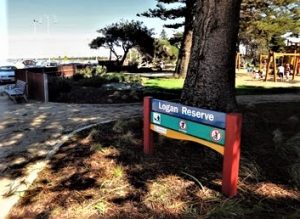 things such as the Langhorne family garden, holiday precinct for the Cuming Smith & Coy and a play area and meeting place for residents and visitors alike. It has also been known under different names. When it was purchased by the Werribee Council in 1937 it was known as Altona Park but since 1961 it is named to recognise the contribution to our fair city by Reginald Logan.

Reginald (Reg) Logan was born 5 October 1914 in Murwillumbah, NSW to parents Joseph Alexander Logan and Isabella Frances Logan nee Whalan. Reg was the third youngest of eleven children. Reg moved to Queensland and enlisted into the RAAF during WWII in Cairns, far north Queensland as a Flight Sergeant.

In 1942 he married Ruth (Muffie) Hannah Snars (1 August 1942) at St Ann’s Presbyterian Church in Brisbane Queensland. The couple remained in Queensland for about six years before making the move to Victoria where they initially settled in Glenhuntly before moving to the western suburb town of Altona in the early 1950’s. This was at a time when Altona was a division of the Werribee shire and also at a time where the ratepayers of Altona were looking to separate and become a Shire in their own right. 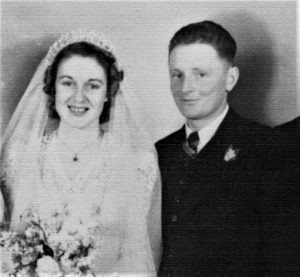 It is here that Reg Logan not only took a keen interest in the ratepayer’s movement but directly joined the fight for severance from Werribee Council. Reg initially settled in Upton Street and worked in a large aircraft engineering works on Millers Road. In the mid-1950’s the family moved to Pier Street where he started up a real estate agency, following a long tradition of fellow Altona men in public affairs. In 1955 Reg stood for election as a representative of the Altona Riding of the Werribee council and defeated the current incumbent Rex Campbell. He now joined Harry Kim and George Ransom as representing the people of Altona and in particular their ratepayers of which Reg was Vice-President of this Association. Logan’s rejoinder was bluntly for independence: ‘We will go ahead on our own and we will have our ratepayers behind us. We will fight it out on our own.’ Logan’s confidence was fairly backed by a growing population and by continuing industrial interest in Altona. With his colleagues he fought for severance which was granted in February 1957. In May of that year he was the first elected to Altona Shire’s first council with eight fellow Altonians.

The Logan family was by now fully entrenched into the Altona community with Reg not only being on council but represented the Council on the Pre School Infant Welfare Committee and in the Youth Club Hall Management Committee. Ruth [Muffie] was a teacher at the Altona Primary School. Reginald served on the council until November 1960 when he retired having served as Altona’s third president in 1958-59 when his aim was to improve the condition of roads, footpaths and install underground drains. Initially the council met at the Altona Homestead to conduct its business and meetings. Anecdotally, when Reg served as Shire President in those early years, Muffie, as expected of the Shire President’s wife, provided the supper for Council Meetings.

During his time on council and for some time after, Reg also served on the Altona Community Hospital board of management, a voluntary position, where he held the roles of vice-president from 1957 – 1959 and then president in the 1959 – 60 year. Reg Logan continued to take a keen interest in shire affairs, in his post council years, being invited to the opening to the new council chambers in Civic Parade in 1963 and writing to the local newspaper in 1966 on the council’s proposed purchase of the Explosive Reserve. Reg continued to run his Real Estate business in Pier Street until, due to Reg’s ill health, under medical advice he and his family moved to a warmer climate in Forster [near Taree] NSW.

Reg passed away in 1978 in Taree and Ruth (Muffie) in 1991 also in Taree. If only they could see how much enjoyment Logan Reserve brings to so many people of all ages throughout the entire year. Our Historical Society is very proud to call Logan Reserve home.

Information for this article were provided by Helen Whiteread and family to whom we are very appreciative.